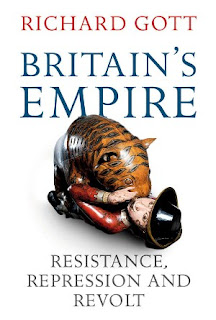 If there is one conclusion that can be drawn from Richard Gott's extensive analysis of the resistance to the British Empire, it is that for most of the time those people unfortunate to live on the pink coloured parts of the map, simmered with resentment. Frequently they rebelled, revolted and fought back against British forces. Most of the time they were defeated, sometimes they weren't and on occasion they won stunning victories against the odds.

This view of Empire is far from the benevolent, benign one that has been portrayed by some historians recently. In seeking to justify more recent international interventions some historians have tried to look back into the past to find examples of Imperial benefits. Gott's book shatters those myths.

Some of the stories in here will be familiar. The "Great Rebellion" of the Indian regiments against their officers and rulers that forms the climax to Gott's book has been written about in great detail elsewhere. Gott places this enormous piece of resistance at the end of a long chain of events. The brutal reality of British rule, combined with a number of other setbacks and defeats that helped give the people of India a belief that they could defeat the British.

Other accounts of rebellion though have almost been forgotten and it is a great strength of Gott's book that he brings these back to our attention, rescuing the stories, as well as some of the individuals from oblivion. No doubt the Xhosa people of Cape Colony, who fought the British to a standstill on a number of occasions are remembered and celebrated in that part of the world today, but their names are almost forgotten to those of us who live in the British Isles. Defeat and massacre don't help to justify Imperial adventure. The "self destruction" of the Xhosa, convinced as they were that divine intervention would soon help them rid their country of the British, does not mask the fact that the defeat of their people after half a century of resistance was the opportunity for British representatives to open up new lands to settlers.

The settlers of the British Empire - frequently men and women fleeing persecution, poverty or hunger back home, such as the Scots and Irish form a second, interesting and neglected role in the story of Empire. Frequently these groups who settled down on land stolen from native peoples, themselves found themselves revolting against British domination. Most obviously, the white settlers of Cape Town who fled Britain's rule and setup the Orange Free State. But Gott documents resistance and rebellion by similar groups from Canada to Australia.

This is not to downplay the fight of the aboriginal, native peoples though. In every country Britain annexed or invaded they needed to use military muscle to keep their land. Sometimes this wasn't enough, as in the amazing stories of the defeat of British expeditions to South America. Native people destroyed settlements and fought some of the best regiments back into the sea to keep these particular Europeans out.

Violence and brutality tended to follow as well as precede rebellion. Defeated peoples were destroyed in many cases. The infamous treatment of the people of Tasmania is one example:

"Taking a leaf from the policing model of New South Wales, Colonel Arthur decreed in November 1828 that the Tasmanian Aborigines should be subject to martial law. Arthur claimed he only wanted to punish the Aborigine 'leaders', but the settlers.. aimed more widely. In one case... thirty Aborigines were massacred by convict 'servants' of the Van Diemen's Land Company, who threw the survivors over a cliff. Many Aborigines were killed, and several women were axed to death. Prisoners were shot. Renewed in 1830.... martial law lasted until 1832, effectively breaking Aborigine resistance in Tasmania."

By putting resistance at the heart of the story of the British Empire, Richard Gott has perhaps made one of the clearest statements yet about the reality of British Imperial rule. However the book is not without flaws.

Firstly the sheer scale of the material has meant that much of what Gott has covered is done superficially. This is not helped by the lack of maps (though there are some fantastic images in the text). Many of the places are obscure and maps would have helped. This would also have given a greater sense of the scope of resistance.

Gott attempts to tell the story chronologically, but this means we are presented with a series of very short chapters, that skip around different parts of the Empire. For instance, the story of the Xhosa (chapters 23, 54, 57 and 65) is scattered through the book which makes it hard to understand the very real continuity between different parts of their story. This format also means that you skip around to such an extent that the readers head hurts - the last five chapters of part five for instance, deal with Africa, the Persian Gulf, Mauritius, Seychelles and Indonesia, Nepal and then Ceylon.

My biggest criticism is that Richard Gott offers very little in the way of analysis. Almost nowhere does he attempt to explain the British Empire. What is its driving force? Why is so much money and resources, as well as human life pumped into overseas expansion? This can leave the reader confused. Was the problem with Empire simply bad local management, or the actions of particularly racist or violent individual leaders? Or was there something else? Related to this is the lack of any explanation of the role of racism - or its development as part of the slave trade. The book ends up being a long litany of abuse and resistance, without any real explanation of the other forces that drive these two factors.

Rather oddly the book finishes with the 1857 Indian Rebellion. While the rebellion was an enormous blow to Imperial hopes, it was hardly the end of Empire. Gott skips over the remaining hundred or so years of British Colonial Rule - so there is nothing here about the final defeat of Britain in India, or the Mau Mau rising in Kenya for instance. Despite a final chapter that tries to rapidly fill in the blanks, the book does feel unfinished.

Sadly though, I do have to take issue with Gott's final comments. Rightly he points out that there is an "unhappy legacy" today of Empire and that Britain continues to fight wars in parts of its former Empire today. But then argues that "much of the British population has reverted with-out question to its old position of accepting unthinkingly what is being done in its name in distant parts of the globe."

Considering that in Britain in the last decade that has been marked by an enormous repulsion towards what is being done abroad by the British military at the behest of successive governments, this is a strange conclusion. Two million people protested on one day against the war on Iraq. Even as the wars in Afghanistan and Iraq took place, many hundreds of thousands protested, rallied, petitioned and campaigned to end those wars and bring the forces home. The failure of the anti-war movement to prevent war, should not be taken as an acceptance of what is being done abroad. One of the most popular slogans of the anti-war movement; "Not In My Name" continues to have a resonance today. This statement is as much a rejection of British Imperialism today, as it would have been in the 17th, 18th, 19th or 20th century.

Newsinger - The Blood Never Dried: A People's History of the British Empire
Posted by Resolute Reader at 9:28 pm