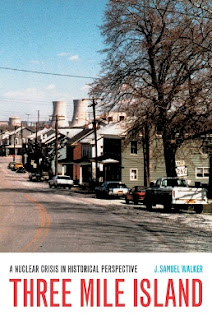 For a few brief years following the 1979 incident at the Three Mile Island plant, it was known as the world's worst nuclear accident. The far greater disaster at Chernobyl in 1986 soon rightly took that accolade. Three Mile Island has however gone down in infamy. J. Samuel Walker's account of the event is an attempt both to describe the accident as part of the history of nuclear power and to try to separate the real story from the myths.

In the public perception TMI lead to large releases of radiation into the surrounding atmosphere. While there were some releases both controlled, as the technicians struggled to stabilise the damaged reactor, and uncontrolled. The amounts released were not as great as many thought. Walker's summary of health studies afterwards errs on the side of those that argue there were few, if any humans injured or made sick by the accident in the short or long term. That said, one thing the book does make clear is that at TMI the United States came close to a situation which could have had very severe consequences for the population surrounding the plant.

The clean-up operation after the accident took many years and cost huge amounts of money. Money that by and large came from central government, not the private nuclear industry. But the most important consequences are not as easily quantifiable. Walker documents the dip in public support for further plants - a dip that when exacerbated by the Chernobyl disaster, pretty much screwed the US nuclear industry completely.

In addition the existing nuclear agencies were roundly condemned. Several of these proved lacking in their hour-to-hour handling of the situation. Walker documents the clash of managerial styles between the company running the plant and the national bodies setup to regulate the industry. The was frequent disagreement over interpretation of what was happening in the reactor and this, combined with aggressive media interest, meant representatives frequently contradicted each other and gave differing accounts of what was going on.

One of the ways that this was most felt was in the discussion about whether to evacuate the surrounding population. Evacuation plans were limited and the area contained many schools, hospitals and several prisons. At the height of the crisis when evacuation was on the agenda as a serious option most of those responsible wanted to avoid it, condemning those who supported the call. The factors determining their opposition to evacuation were linked to political and economic consquences as well as the risk of injury during any panic.

Walker notes one such example. A key figure in the Presidential staff assigned to the TMI question, Jessica Matthews, concluded that "evacuation was not advisable", basing her judgement "primarily on the pitfalls and costs of conducting a large-scale evacuation, and secondarily on the harmful effect it would have on the nuclear industry."

With quotes like this, it is not hard to conclude that many of those taking decisions in the immediate wake of the TMI accident were not doing so primarily based on the interests of the population surrounding the reactor complex.

This is not to say that individuals, primarily those technicians at TMI did not work very hard in a potentially fatal situation to avoid serious catastrophe. Walker tries to avoid describing heroics, so we learn few of the names of individuals who clearly risked their lives trying to prevent a core meltdown. However much of the post-accident analysis concluded that it was individual error that was the biggest single factor in the developing problem.

In summary for instance, Walker says that TMI, along with Chernobyl were accidents "due largely to operator errors that exacerbated design flaws or mechanical malfunctions. In both cases, technicians overrode safety systems that could have prevented or mitigated the damage."

However phrasing the problem like this implies that the mistakes lay simply with the technicians. In the case of TMI, Walker also explains early on that once the accident took place it proved very difficult for experts on the ground to understand what was happening. Alarms that represented different problems all had the same sound and banks of flashing warning lights did not help technicians prioritise. Key information such as the level of coolant in the reactor was simply not available. The lack of this piece of information led to one of the key mistakes made as officials turned off cooling mechanisms and precisely the moment they were needed.

As one of the investigations into the accident at TMI later concluded was that those trying to anticipate problems and prevent accidents in nuclear reactors was preoccupied "with the safety of the equipment, resulting in the down-playing of the importance of the human element in nuclear power generation."

Walkers' book is a interesting social history as well as a technical one. He notes for instance that most families did not evacuate themselves, preferring to believe that the accident was not as serious as they imagined, despite some dramatic press reports. But the reasons people gave for not evacuating are interesting in themselves. "[I]n households in which no family members evacuated, 65% cited their conviction that 'whatever happens is in God's hands' as a reason for not leaving their homes." Though the same report also showed that 71% of "respondents" said that they did not evacuate because they were waiting for an evacuation order.

Walker is attempting to give a balanced account of the accident. Despite his sponsorship by the US Nuclear Regulatory Commission he does manage to be nonpartisan in his approach. As a result however those who have positions opposed to, or in favour of nuclear power are likely to read this book to find information that will only bolster their own positions. Those who argue for nuclear power and its safety will argue that from TMI, "lessons have been learnt" and "designs improved" meaning it could not be repeated.

As a convinced opponent of nuclear power, my own conclusions are the opposite. What TMI proves is that nuclear accidents cannot be avoided altogether. When something does go wrong through human error or technical failure the consequences have the potential to be enormous. That is not to say that all reactors will ultimately fail, nor that all accidents will inevitably lead to death and destruction on a vast scale, but that the potential remains in a way that doesn't exist with other forms of power generation.

The more recent tragedy at Fukushima has only underlined the inherent problems of nuclear power. This is a source of power that is not needed either to generate electricity or to combat climate change. The alternatives exist, yet the obsession with nuclear energy from governments around the world remains. At times, Walker's detailed, moment-by-monent account of events at Three Mile Island is both fascinating and nerve-wracking. But it should also give food for thought for those who continue to advocate this extremely dangerous way to boil water.

Caldicott - Nuclear Power is not the Answer
Posted by Resolute Reader at 10:36 pm