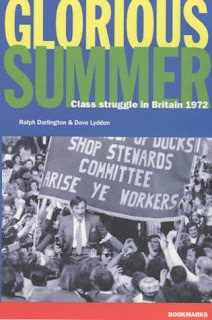 "I was a 22 year old docker, I'd been working in the docks for two years. And I turned up at the World's End massive building site in Chelsea rather sheepishly and knocked on this little wooden door to be greeted by Frank Campbell, one of the IS builders, who said 'Thank God, you're here now'. And I just stood at the door while Frank went inside and shouted 'There's a dockers' picket line, everybody out'. And they all came out..."

1972 was the year when rank-and-file action by workers from the dockers, to the railworkers; from building workers to engineers and most importantly coal miners fought a British government to a standstill and broke the back of their attempts to undermine trade union organisation and attack pay and conditions.

Forty years later, when most British workers are used to unions dominated by their bureacracy, who seem rarely to fight back and often appear to capitulate in the face of governments, stories like that of the docker above may seem impossible. Yet the 1972 strikes were not predicted by anyone. The government was fairly confident that it would be able to push through legislation that curbed union activity and many of the union leaders at the time were wary of a major struggle.

As a year of battle, 1972 developed quickly. The miners took on the Tories early in the year and rapidly learnt new methods of organising and fighting. These were driven by the bottom of the union. Ordinary trade unionists, often shop-stewards, learnt that two things were needed - militant mass action by union members and solidarity. So the miner's strikes of 1972 were not won simply by the strikes, but by mass pickets that encouraged solidarity action and prevented coal being moved. As the lights failed and coal stocks dropped, the cabinet met by candle-lit. Darlington and Lyddon quote an article from that bastion of revolutionary socialism, Management Today which argued that the miner's strike was "unquestionably the most bitterly contested. The determination, not to say ferocity, of the pickets will be remembered for a long time yet. Their tactic of preventing coal moving not just out of the colleries but into the power stations was novel, intelligent and very largely successful."

Other groups of workers quickly learnt that if you want to win, you need solidarity. Fighting alone would lead to defeat, as a high-profile strike by Postal Workers had shown a few years previously. When the dockers came out, later in 1972, and several were imprisoned for breaking the government's shiny new Industrial Relations Act, mass strike action and picketing out of workplaces like the World's End building site mentioned above quickly forced a government turn-around. In all of this, as airports closed, building sites shut down, trawler fleets refused to fish and trains stopped at the mere sight of a union placard, the official leadership of the union movement remained unable to act. As an unofficial general strike grew from the bottom up, the TUC's leaders struggled to stay in charge. In effect they became irrevlevant in the face of rank and file organisation and activity.

The docker mentioned above, Bob Light, is quoted later by the authors. Talking about the five dockers imprisoned in Pentonville and the effective general strike that forced them to be released, he remarks;

"Why is it there are no badges, no mugs? Why is it that Pentonville is the forgotten epic? It is precisely because it doesn't suit the rotten stinking politics of all the reformists who control the labour movement in the country. The lessons of Pentonville are essentially revolutionary."

Glorious Summer is a tremendously important book for trade union militants today. In the wake of the November 2011 strikes, when 2.5 million workers went out in a brilliant display of solidarity and workers' power we need to learn the lessons of the past. The trade union leadership will only fight if pushed from below. Much of this book enables us to understand the dynamics and potential of a workers' movement growing in confidence. In places it is full of detail - of the machinations of the union leadership or the precise natures of government offers. This isn't mere historical information but helps give the reader a sense of the precise situation that workers were fighting in.

Ultimately the Tory government of the early 1970s was left reeling by this mass action. From Saltley Gate to Pentonville, workers had shown they wouldn't take orders from the bosses' party. Further strikes in 1974 brought Edward Heath to the floor and his government was broken at the next election.

Sadly the revolutionary left at the time was too small to shape the struggles and allow them to grow and develop further. The Communist Party by then was too obsessed with making sure that left union leaders weren't damaged by the action. While individual members of the CP (and of groups like the International Socialists) led brave battles, the CP itself proved unable to shape the future.

So the lessons here, as Bob Light says are essentially revolutionary. If we want to bring down the current crop of Tory politicians, we'll have to learn them. Our best hope is that ordinary workers and trade unionists will develop some of the spirit of their parents and grand-parents in the 1970s, and not be held back by opportunistic union leaders.

Cliff & Gluckstein - Marxism and Trade Union Struggle: The General Strike of 1926
Henderson - Life on the Tracks: Memoirs of a socialist worker

Bookmarks, who published Glorious Summer, have recently brought out a short pamphlet by Pete Jackson, celebrating one of the high-points of 1972 - the Battle of Saltley Gates. There is a commerative website and Jackson's pamphlet Close the Gates can be purchased here.
Posted by Resolute Reader at 2:13 pm

Thank you for the always interesting book reviews.

There is a typo in the text:

"but my mass pickets that"

Many thanks. That typo (and a couple of others) corrected.