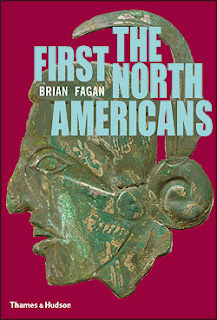 Around 15,000 years tiny bands of people travelled across a narrow band of land between what is now the far eastern end of Russia and Alaska. The land bridge caused by the colder climate at the end of the last Ice Age allowed these hunter-gatherers to arrive in a new world. A vast area without humans, but teaming in animal and plant life.

Brian Fagan's book is a brilliant introduction to the history of the next 15,000 years told through the archaeological evidence that remains to us. The earliest arrivals into the American continents left little remains, we are limited to a few handfuls of their stone tools and little else. But these first Americans rapidly developed an astonishing variety of communities and were able to exploit the varied natural world in many different ways.

The story of the Native American's very much one of change. Often this was gradual, though, as Fagan points out, it could be very rapid. For thousands of years different groups remained as hunter-gatherers. The famous site of Head Smashed In a Native American hunting area in modern Canada where bison were driven off a cliff in their hundreds was used for 7000 years. However the "buffalo jump" here was part of a much larger and more complex community rather than simply being a site for killing animals.

One of the great strengths of this book are the brilliant illustrations. Many of these are black and white photographs as well as line-drawings and maps. However pride of place goes to the stunning colour plates, some of which, such as the images of the Mesa Verde, "Cliff Palace" in Colorado are stunning. I particular liked the images of the Clovis points - spear heads used by some of the very earliest peoples in America. These are shown in full colour in someones hand, helping the reader understand why these pointed stones must have been awesome weapons.

The later depiction of the Native American peoples as savages deliberately hides the very complex and advanced societies that they had developed. The arrival of agriculture initially of maize, spread rapidly through the continent and helped some of the groups develop complex, class societies which in turn produced some of the most fascinating archaeological sites. The communities that built the Hopewell mounds or the enormous earthworks at Poverty Point in Louisiana certainly must have had very complex social structures and organisation. Poverty Point was a tiered earthwork with some 35,000 cubic metres of soil. Fagan estimates that all this material, carried in woven baskets would have taken 1,350 people three years if they worked 70 days a year.

Fagan's book covers an enormous quantity of material, rapidly and thus out of necessity it glosses some details and he admits that it concentrates on the basics rather than reporting every archaeological debate and difference. Aimed at the general public as well as students and academics, this is an accessible introduction, though sometimes it tends towards academic jargon. The word "palimpsest" should, in my opinion, never be used if the author is striving to be accessible. Its use here on the first page of chapter one might well be considered off putting.

Fagan finishes by discussing the horrific impact of European arrival on the populations of the Americas. Here he documents the genocide and disease that destroyed thousands of people and generations of culture, often in a few months.

He also discusses the way that European demand for resources such as fur changed the dynamics of the existing cultures. Here I think he underestimates the way that the European notion of commodity ownership helped destroy hunter-gatherer cultures. Prior to European arrival resources or land were mostly for the use of the community or to solve people's needs. Once European traders arrived, the exchanging of resources such as fur, created a situation were commodities were important for their value in exchange rather than their ability to serve peoples' needs. I've discussed this further in my review of William Cronon's excellent book, Changes in the Land here.

But these are minor points that come at the end of a wonderful examination of the development of many different cultures across North America. I would heartily recommend this to anyone interested in the lives of hunter-gatherer communities and the evolution of the earliest class societies. The pictures and maps are particularly enlightening and Brian Fagan deserves credit for bringing them together.

Fagan - Floods, Famines & Emperors - El Nino & the Fate of Civilisations
Fagan - The Long Summer: How Climate Changed Civilisation
Mithen - After the Ice: A Global Human History, 20,000 - 5,000 BC
Posted by Resolute Reader at 9:56 pm

I haven't finished this yet (only just finished Pac-NW groups, moving on to Pueblo, then Arctic groups) but wante to share that I am enjoying it so far (thanks for the recommendation!).

I thought I knew quite a lot about the groups in the Pacific Northwest, but apparently not! I was amazed that archaeologists had enough evidence to show that over, what, 2000 years, groups in Alaska moved from coastal existence, to an inland river-based existence, and then back to the coast. I would have liked more of the evidence of this explained, but as you mentioned it's an overview.