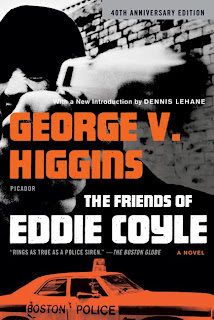 Described in the introduction as the "game changing crime novel of the last fifty years" it is difficult to understand the hype that surrounds The Friends of Eddie Coyle. It certainly is a well written novel, a tale told almost entirely through conversations between central characters. But while the conversations certainly allow the author to demonstrate his skills, but this isn't enough to make the novel as brilliant as many claim.

Eddie Coyle is a small time, and fairly inept gangster. Facing jail for his part in a minor crime, he is offered a way out if he is prepared to tell the police about other, bigger crimes he knows of. Coyle is a small cog in a larger, wider criminal network. Amongst these acquaintances are gun-smugglers, murders and bank robbers.

The choice Eddie faces, which "friend" to sell out makes up the central part of the story. The problem is that the police want more, and once Eddie has begun the journey of selling out his friends, it is difficult to go back. The conclusion is not-unexpected, but at least the drama mounts and the story holds till the end.

I'm not sure that this really is "one of the greatest crime novels ever written". But it is fairly enjoyable and it'll keep you off the streets yourself for an hour or so.
Posted by Resolute Reader at 7:50 pm

Go see the stage version of this wonderful novel in Cambridge, MA. A few weeks are left for the run! http://www.stickballproductions.com/

Also - See this tribute project I produced in honor of Mr. Higgins and the movie version of his great book, "The Friends of Eddie Coyle":
http://www.youtube.com/watch?v=aIRWsLiDixg&feature=results_main&playnext=1&list=PL8171861DD8577ACA