Rob Wallace - Dead Epidemiologists: On the Origins of Covid-19 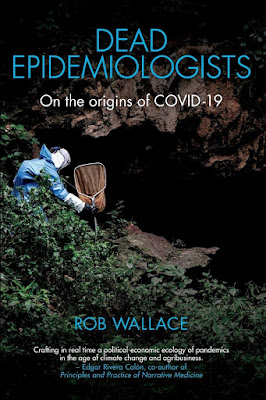 Back in February 2020 when Covid-19 was just beginning to make headlines I lost count of the number of times I was asked by fellow left-wing activists to recommend a book on capitalism and disease. My answer was always Rob Wallace's book Big Farms Make Big Flu. Published in 2016, those of us who had read it were a little forewarned and forearmed for coronavirus. Reviewing it back then I wrote the book warned us that pandemic was "very much a question of not if, but when".

While I was recommending his earlier book, Wallace himself was being bombarded with requests for interviews, articles and speaking engagements. Out of that came this excellent new book. Dead Epidemiologists is a collection of material that grapples with the big questions around Covid-19 - its origins, the failure of capitalist governments to deal with it and the way the disease exacerbates existing social, political and economic fractures in society.

Wallace explains the mindset behind the book:

The reactionary bent to disease control left and right has since pivoted me to assisting efforts in anti-capitalist agricultures and conservation. Let's stop the outbreaks we can't handle from emerging in the first place. At this point in my career, with the structural pacing the emergencies, I generally write about infectious diseases in only tangential terms.

near-nothing real was done about any of them. Authorities spent a sigh of relief upon each reversal and immediately took the next roll of the epidemiological dice, risking a snake eyes of maximum virulence and transmissibility.

And here we are. This week the stock markets have rallied at the prospect of multiple vaccines coming online, and politicians are breathing sighs of relief as they recklessly anticipate being out of danger at some point soon. But nothing fundamentally has changed. The root causes of disease spillover and the structural problems in capitalist society that means that future pandemics are both likely ("not if, but when") and deadly, have not gone away. Wallace again:

Agribusiness ever turns us toward a techno-utopian future to keep us in a past bounded by capitalist relations. We are spun round and round the very commodity tracks selecting for new diseases in the first place.

These arguments are the key part of the book. Wallace skewers the idea that when it comes to disease the problem is simply the genetic makeup of different viruses. Rather it is about the circuits of capital. The flows of commodities and money, a system where corporations diversify by investing in housing and pig farms to make money from both, encouraging the creation of disease with one hand and the conditions for disease spread with the other. Big agriculture drives deforestation, it helps concentrate reservoirs of animals and disease in smaller areas, encouraging their spread and evolution. Capitalism creates concentrations of animals in vast numbers; thousands of cattle, tens of thousands of pigs, millions of chickens - the perfect petri dish to evolve new strains of disease and the opportunity to leap to human hosts. It does so because this is how to accumulate vast profits.

The answer is obvious. Pull the rug from under the multinationals. Protect the forests, "reintroduce the livestock and crop diversities and reintegrate animal and crop farming", allow farm animals to "reproduce on site, restarting natural selection that allows immune evolution to track pathogens in real time.... stop treating nature and community... as just another competitor to be run off by the market".

It's a compelling vision, but one that won't come about through signing a few petitions and donating to some kindly NGOs. Instead "people must walk through the door of a global clash with capital and its local representatives... however much any individual foot soldier of the bourgeoisie... attempts to mitigate the damage."

That's the hard bit. But its a conclusion that cannot be ignored. For two reasons. Firstly, as Wallace points out "agribusiness is at war with public health. And public health is losing" but, more dangerously, the capitalists see the crisis as an opportunity.

There's a disturbing part in Dead Epidemiologists that shows how this happens. Disease kills off a few million animals and then the capitalists move in to fill the space and grab the money. When Donald Trump deployed the Defence Production Act in Summer 2020 he did so for the meat industry (but not, as Wallace cynically points out for PPE production). The meatpacking industry, which had been and continues to be the epicentre of local outbreaks of Covid-19, was protected in order to allow "Big Hog's access to a bullish China market that lost half its domestic pig supply last year to African swine fever". They really will fiddle while we feverishly burn up.

Industrial agriculture is a driver of disease, and much else. Wallace talks about regenerative alternative agriculture. But he also points out that the food system as a whole is at fault. The US coronavirus outbreak began in big, globally connected, cities. But among rural areas through a "vast commodity trade":

However mechanized the value chain, there are people interacting with each other all along the way. Food commodities are the means by which even the most isolated county can be linked into global epidemiologies.

Reading media reports of disease outbreaks in meatpacking plants in the US and UK, we know this is true. The Defence Production Act forced workers back into work, and they got sick while the bosses got richer and richer. The cynicism is appalling; "under the guise of an emergency the administration... allowed poultry plant lines to speed up to rates that require workers to bunch closer together not farther apart."

While lack of union organisation and management callousness in the face of requests for PPE makes the spread of Covid-19 much easier, it is the capitalist need to continuously accumulate more wealth that prevents even a temporary break in the chain of trade and commodity production taking place.

Wallace never loses sight that Coronavirus is a crisis for ordinary people. Capitalism has created the conditions where pandemics are both more likely, and more deadly. It has ensured that those that suffer first and most are the poorest, in both the Global South and North.

But Wallace also reminds us that there is a force in society who can challenge this and build an alternative society. The migrant workers in America's food industry, the peasants of Asia and South America, the meatpackers, lorry drivers and supermarket workers who are part of a global food system are also the very people who can rebuild it from the bottom up.

Once again, in this excellent readable polemic, Rob Wallace has shown us the problem and the alternative. We now need to act.

Posted by Resolute Reader at 8:55 pm