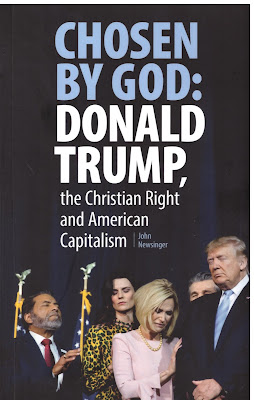 In this new book, published just before the 2020 US election, British socialist historian John Newsinger turns his analytical eye on the Trump Presidency. This is not a blow by blow account of Trump's first term. Instead, and more usefully, its a study of on part of the social forces that put Trump into the Whitehouse - the Christian right.

For those of us watching the US election, and US politics in general, understanding the Christian right is crucial. Until I'd read Newsinger's book I'll admit that I underestimated their influence in the general political scene. It is easy to look at post-war US history and look at individuals like the conservative televangelist Billy Graham and see them as oddities. But, as Newsinger explains, they and their more modern contemporaries are a direct result of a set of politics that used the Christian Right and, were in term shaped by them.

Newsinger begins with a conundrum. Why hasn't the United States secularised in the same way as other developed countries? The answer requires looking at "the end of the Second World War and the start of the Cold War". In the aftermath of World War Two the US saw an "unprecedented religious revival". As Newsinger says it worth examining the detail:

This revival, Newsinger shows was the result of the top echelons of US society "using all the resources at its disposal to mobilise Christianity in defence of American capitalism and imperialism against the threat of atheistic communism". Of course this process had begun earlier. At the end of the 19th century, fearful of radical revolt from below, religious right-wingers had skilfully positioned themselves as a bastion against left ideas. They offered, in exchange for heaps of cash, to stand up for the family, Christianity, capitalism and the profit ideal against atheism, communism and the trade union movement.

There followed a symbiotic relationship between the political right and the Christian right. Post war US Presidents who had seldom talked of their religion suddenly became incredibly religious in an attempt to court and use the Christian right for its own end. Billy Graham ended up having an office in the Whitehouse. There was, of course, vast sums available for the churches who got this right, but more importantly the Christian right became adept at using the media to raise its profile, its influence and its worth.

Newsinger documents some of the corruption, scandals and political intrigue that inevitably came about. Some of these are entertaining examples of contradiction. Few of the leading figures in the Christian right really took to heart the teachings of the Bible. We can snigger at this, but in reality the insipid way that a pro-capitalist doctrine came to dominate Biblical interpretation is rather depressing. In this reading of the teachings of Jesus Christ, God rewards those who seize the capitalist imperative to put profit before everything else. Its a recipe that leads to poor people sending cheques and prayers to vastly wealthy preachers who have no interest in helping them. Crucially the Christian eight was part of an appalling bulwark against the Civil Rights movement.

Ironically, but not surprisingly, the Christian right took to Trump faster than Zacchaeus giving half his possessions to the poor when Jesus stayed overnight. His politics melded with their anti-gay, anti-abortion, pro-family politics. Trump promised the Christian right everything and the same people who'd tried to drive Clinton from office for his affair with Monica Lewinsky ignored Trump's own transgressions. For the Christian Right its been a marriage made in heaven:

Trump has delivered for his evangelical constituency, more than any previous president. The man most responsible for this is Vice President Mike Pence, a determined member of the Christian right, absolutely committed to their cause, and moreover, very much hoping to succeed Trump as president. Trump has staged the events and mouthed whatever vague Christian platitudes he can call to mind, parroting the danger that Christian America faces, but it is Pence who has organised the evangelical advances within the federal judiciary.

What of the future? The Christian Right will not disappear with a Trump defeat. Indeed all Presidential candidates have been pulled closer to it. Newsinger points out that "elements of the Christian right" could easily end up "manifesting themselves as an American fascism".

Unfortunately its in his final conclusions I found myself disappointed by this otherwise fascinating and alarming book. While the Christian right is clearly powerful, confident and strong, there are other forces in US society that can challenge it and pull constituent parts away. In particular Black Lives Matter is a reemergent Civil Rights movement that offers real, concrete, hope to the oppressed. Newsinger does, rightly, point out that there are "many American Christians fighting for a better world" as part of numerous progressive causes. But I felt that this important aspect to contemporary US politics was neglected almost entirely. Defeating Trump and Trump's politics, as well as the right-wing politics embodied in the Christian right will need mass movements and I'd have liked to know more about how that has worked in the past.

That criticism aside, this is a very useful, readable and condensed introduction to a sector of US politics that proved crucial to getting Trump elected in 2016 and may well do the same in 2020. I highly recommend it to everyone trying to understand the United States in the 21st century, especially those fighting for a real alternative.

John Newsinger - Fighting Back: The American Working Class in the 1930s
Newsinger – The Blood Never Dried – A People’s History of the British Empire
Newsinger - The Dredd Phenomenon: Comics and Contemporary Society
Newsinger - Them and Us: Fighting the Class War 1910-1939

Posted by Resolute Reader at 11:34 pm