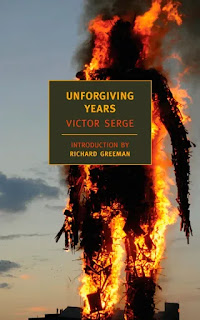 These experiences imbibe Serge's novel Unforgiving Years. This was his final novel. It's filled with the darkness at the heart of the twentieth century - the Second World War and the defeat of the Russian Revolution (though not, specifically the Holocaust). In four closely connected episodes Serge sums up the Revolution as an event that drew colossal inspiration and dedication from millions of people, who were then spat out by the regime that took over. It's a complex and difficult work. Serge has a small group of inter-connected characters, two of whom Daria and D might be easily confused. D is a Russian secret agent who wants out, and Daria is a close comrade he has known since she was a young fighter in the Russian Civil War. D escapes, Daria stays and, while disgraced, is recalled to duty in the Siege of Leningrad where she experiences the horrors of that most brutal of conflicts. Characters, lovers, friends, comrades come and go - some die, some vanish, written out of history, and others move on.

Daria ends up underground in Germany as the war ends. She meets up with the Resistance and brutally dispatches the Russian enemies. This is the section that reads most like a novel, as she and others struggle to survive the collapse of Hitler's Reich. It's the final part though, when reunited in Mexico, the two D's face the end.

The novel is dark and full of despair. The hope, the love, the inspiration is fleeting but rather than simply being due to war and destruction it is also because of the tragedy that has befallen people's hopes of a better world: crushed by fascism and Stalinism. In this sense the novel follows Serge's own tragedy. He once told Trotsky's widow that only the two of them really remembered how it was. It was an exaggeration, but not by much. Serge wasn't murdered, but his life's work was broken. Perhaps he saw a future when the movement would grow again, but that's not here in this novel - this is the defeat of a class, individualised down to the experiences of a handful of characters.

The book isn't an easy read. It benefits the contextualisation that translator Richard Greeman gives in his introduction. But it's subject matter, it's disjointed story-line and its wide range of characters make it difficult to follow in places. Nonetheless it's an amazing work.

Serge - Conquered City
Serge - Revolution in Danger
Serge - Year One of the Russian Revolution
Serge - Memoirs of a Revolutionary 1901 - 1941
Posted by Resolute Reader at 10:19 pm