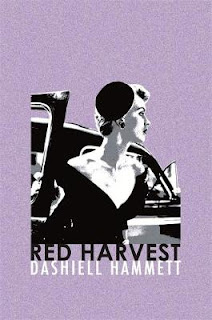 I was drawn to Dashiell Hammett's classic hard-boiled detective novel on learning that it had served as the inspiration for Akira Kurosawa's film Yojimbo which in turn provided the inspiration for Sergio Leone's A Fistful of Dollars. First published in 1929 it is a classic of its genre, with the central anonymous detective playing fast and lose with his gun in the midst of a deeply divided, corrupt town called Personville. Personville is so awful it's known to those who live there as Poisonville and upon arrival our hero quickly finds out that there are no innocent characters here. In fact the town is riven in two, with rival forces fighting for control of the liquor trade and other underground activities. The police aren't separate from this - they make up one of the violent and corrupt sides.

Red Harvest is incredibly violent. In contrast to Raymond Chandler's works and others by Hammett such as The Maltese Falcon there is a lot of killing. But what distinguishes Harvest is that the hero partakes in the slaughter. This isn't just self-defence either, there are several points when he sets up characters to be killed. The ambiguous moral position of the "Continential Op" is a key part of Red Harvest. He lies, break laws and murders his way around Personville trying to fix the larger problem - is a crime committed to prevent far worse things actually a crime?

Most of those the Continent Op encounters turn out not to think so - but then they are criminals themselves. Oddly for such a detective book there is only one major female character who is a pivot for much of the action - she is a sort of female version of the Op, playing off sides against each other, though in her case she's doing it for her own interests.

Interestingly Personville also optimises something else about 1920s America - the greed, violence and pollution of industry. Several representatives of law enforcement have been party to the murderous suppression of trade unionists from the Industrial Workers of the World. Hammett is supposed to have based this on his time in the Pinkerton agency, the model for the Continental Detective Agency that our hero represents.

This is the set up. Does it work as a novel? Its certainly not what I was expecting havnig read The Maltese Falcon. This is more action packed and more violent and less about the actual process of working out a mystery. In fact the reader, like the Continental Op's fellow detectives, spends most of the time in the dark following the hero around different scenes. The book probably betrays its origin in magazine serials far more  than other stories. Reading it as a book works as an adventure story, though I was left unsatisfied by the conclusion.
Posted by Resolute Reader at 12:16 pm

Good review.
Reading the novel I was also struck by the amount of action, which we usually didn't see in crime fiction of that era (outside Doc Savage-type pulp adventure), and in fact it seems to me a milestone that way. I certainly treated it as such when writing about paramilitary action-adventure recently: https://www.amazon.com/gp/product/B084VQBQ4B/ref=dbs_a_def_rwt_hsch_vapi_taft_p1_i11
As to the reader being in the dark-I took that as a result of his adherence to the "Show don't tell" rule, which works easily enough when everything's basically straightforward, but makes things difficult when you have a lot of information to convey or ambiguity in what is being conveyed. (For the same reason, I've long found John le Carre's spy novels to be more difficult reads than people usually acknowledge.)