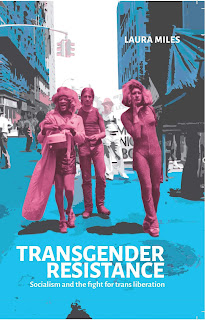 In Britain today trans people have a greater visibility than perhaps at any other time in the country's history. As a result trans people and trans politics has become a subject for fierce debate on the right and the left. Tragically, especially in Britain, many on the left have ended up taking positions that are transphobic or transcritical. This is despite the horrible oppression and discrimination faced by transpeople in Britain and around the world.

So it is excellent that socialist and trade union activist Laura Miles has written this new book. Miles begins with the strides forward that trans people have made, "through the hard work and efforts of countless activists there are now many support organisation for trans and non-binary people, something that could only have been dreamed of forty or fifty years ago". There are now many (though not nearly enough) positive articles, books, role-models and representations in the media of or about trans people. Yet there is also tragedy. Miles explains that the Transgender Day of Remembrance (TDoR) has been marked on 20 November every year since 1999.

It is important to highlight this oppression and violence against trans people. One of the arguments that trans-critical people often use is that transgender people are a threat to non-trans women in particular. Yet they rarely acknowledge the routine violence and discrimination that trans and non-binary people experience. I was glad that Miles doesn't just focus on the trans experience in Britain, or the developed world. One chapter looks at what it is like for trans people in countries and regions as diverse as Africa, South Korea, Russia, Latin America and the Indian sub-continent. These are difficult chapters to read as the violence is horrible and often routine. Miles concludes:


These snapshots of life for transgender people around world demonstrate that transphobia is endemic in modern capitalism although it varies in form and intensity from society to society and over time. A range of factors contribute to this - cultural and religious issues, economic factors such as crises and levels of wealth and poverty. A very common factor is how prejudice, discrimination and violence against trans people and others is whipped up as part of a general repression of opposition to growing inequality and disparities of wealth.

Despite this repression, trans and non-binary people have a long history. Miles looks at the way different historical societies have understood gender. Studies of Native American societies have shown Miles says, how "rather than being ostracised or forced into obscurity, gender-variant people were embraced by some 150 tribes, serving as artists, medicine people, religious experts and tribal leaders". She continues that "many societies considered that there were not two buy three, four, or more genders". I won't dwell here on the historic material, even though it is fascinating and demonstrates that humans have frequently taken very different views about sex and gender to that which is usually considered normal in modern capitalism. I will note though that I was pleased to see that Miles records the way that historic rebellion, such as that of the Rebecca Riots in Wales, often involved cross-dressing by rebels. There is a long tradition of this stretching particularly through British rural rebellion that I have noticed in my own studies of the subject.

The tour of the historical experience demonstrates the way that ideas of gender and sex become fixed with the development of the capitalism family. Here Miles draws on the classical Marxist analysis of the role of the family within capitalist production shaping wider social relations. It is this, she argues, which shapes the way that trans people are seen and related to within capitalism. While Miles shows exactly why science doesn't confirm the simple "two genders" model, it is the political analysis that is most important. It's worth quoting Miles at length on this:


The source of sexism, misogyny, women's oppression and trans oppression lies in the exploitative class relations that derive from capitalism's drive to appropriate and control labour power in order to accumulate surplus value, and in the dominant ideology of the nuclear family and its role in the socialisation, reproduction and provision of care for workers.

Everyone's gender identity is part of the deeply held sense of self which develops neither as an exclusive derivative of our biological sex nor merely as a response to the social norms and gender expectation that we encounter by virtue of being social beings. If it were simply one or the other, arguable there would not be transgender or non-binary people, either because our chromosomes would be all-powerful in forming our gender identity or because society's strong and pervasive gender binary oppression would lock us all irrevocably into one of the two hegemonic gender binary categories.

These conclusions don't seem particularly radical. So it is alarming that many on the left have adopted positions that would seem closer to those of the right in seeking to deny trans people rights and protections. Often these arguments take the form of arguing that such rights undermine women's rights won through decades of struggle. But Miles demonstrates how this is not the case. In particular fear-mongering over the right to self-identify risks setting back trans-rights many years. As Miles concludes, "such measures... would sweep away trans women's rights in particular and would in effect erase them as well as intersex people and those identifying as non-binary".

Miles concludes the book by looking beyond simply winning the rights that we might get under capitalism. She shows how a socialist society, by breaking free of the capitalist model of the family, and ending poverty and inequality can, through the process of revolutionary change be one in which people would have "many different gender expressions". She finishes with an inspiring quote from Leslie Feinberg who wrote in hir book Transgender Warriors:


None of us will be free until we have forged an economic system that meets the needs of every working person. As trans people, we  will not be free until we fight for and win a society in which no class stands to benefit from fomenting hatred and prejudice, where laws restricting sex and gender and human love will be unthinkable.

The important statement here, is that "none of us will be free" which includes those who don't identify as trans, as well as those who are non-binary or transgender. We will not be free, until everyone is free. Laura Miles' is book is a timely and important contribution to that struggle that ought to be read by every political activist fighting oppression and exploitation.

Orr - Marxism and Women's Liberation
Leacock - Myths of Male Dominance
Engels - Origins of the Family, Private Property and the State
Posted by Resolute Reader at 10:14 pm