Tom Lawson - The Last Man: A British Genocide in Tasmania 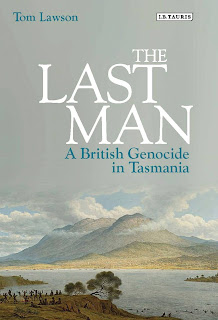 The story of the British arrival in Tasmania (known then as Van Diemen's Land) and the subsequent genocide of the aboriginal people who lived there is rarely discussed. It has parallels with events in other colonial nations, particularly in mainland Australia. But, as Tom Lawson's convincing but  tragic book shows, this was a genocide that was made in London and needs to be understood in the wider context of British colonial policy.

Lawson is a Holocaust scholar and he explains that he came to write about this subject after looking at the depiction and understanding of the Holocaust and genocide in society. As such this book is not a detailed history of what took place in Tasmania, though there is enough to make those who do not know the general history understand that this was a period of horrific events against the aboriginal population. An early massacre of aboriginal people at the first settlement at Risdon Cove was horrific enough, but the British turned this into an explanation for the aboriginal resistance that they experienced, which required a response in turn. In other words, the British argued that the victims were the cause of their genocide - which combined with racist prejudices formed the backdrop to subsequent events. As Lawson explains:


The idea that the island's [Tasmania] people had been prompted to an indiscriminate vengeance by the massacre, a passion which sustained them and their descendants over the next 30 years, tells us much about the assumption that the British brought with them to Van Diemen's Land. Tasmanians were not, they supposed, capable of rational thought or action. Indeed the belief that indigenous peoples across the Empire were essentially childlike, incapable of meaningful communal or political action, underpinned the very basis of the British occupation of the land. It was widely believed that an imagined failure of such peoples to exploit the resources of the land provided the moral and legal basis of colonisation.

The British considered that a "state of war" existed, which basically legitimised their actions. But their prejudices about the indigenous peoples also affected what they wanted done. "No longer would the communities be able to pursue their nomadic, migratory culture. Instead they would be reliant for sustenance on a colonial authority that wished to enclose them permanently."

The contradictory interests of the British and the aboriginal people "could only be resolved by force", and the power was in the hands of the colonists. Lawson explains about the colonial authority in Tasmania that it was


trapped within a mindset that they could not recognise made little sense even on its own terms. They were committed to a path that continually sanctioned a greater and greater degree of force, while arguing that force should be avoided. With every approval they opened up new possibilities for violence even while they continued to condemn violence itself. The British government preached protection [of the aboriginal people], while contrarily approving of measure after measure that would escalate violence. It was, at the very least, a form of self-deception.

This last point is important. Some historians have argued that the destruction of Tasmanian culture was the consequence of the British on the ground. Lawson, in contrast, argues that it was British policy that encouraged genocide. Since violence was considered a legitimate response to resistance from the aboriginal people, then massacres became acceptable. In passing its worth noting that much of this violence was committed by convicts sent to Tasmania. As Lawson points out "their violence was directed at the only people in their world less powerful than themselves." The role of convicts, undesirables, in the eyes of the British government would become an excuse for many for what took place in Tasmania.

Lawson points out that the British government select committee that was setup to examine the aboriginal people's condition reflected a "class-based discourse" that saw the violence as arising out of sending "Britain's own savages" abroad. But we should not lose sight of the fact that genocide came from colonial policies that saw indigenous peoples as occupying land that they could not and would not use, and that colonialism could both use those resources and transform the aborigines into model British citizen Christian farmers. In the eyes of the British, when they refused to conform, the aboriginal people were doomed to an inevitable decline.

Liberal and progressives in Britain also saw this inevitable decline arising out of a similar process. If Britain was the height of technical and intellectual achievement than "lesser" peoples were doomed in the face of British arrival. Perhaps most fascinatingly and distressingly, Lawson shows how this approach pervades attitudes to indigenous remains and relics that were in British museums until recently. Efforts to get human remains and important cultural objects back to Tasmania were, on several occasions, met with responses from authorities which assumed that either the Tasmanian people must be extinct or that they could not look after the objects themselves.

This is a remarkable book that deserves a wider readership than it appears to have had. Lawson argues clearly that the destruction of Tasmanian culture was the consequence of  of the British Colonial Office's "commitment to the relentless pursuit of colonial development". But he goes further and argues that the horrific, forgotten events of this time, mean that "when we think about the British Empire we should remember the violence on which it was based, and when we think about genocide we should remember that it is part of our world too".

Tom Lawson's book is an important contribution to post-colonial studies of British Empire and a must read for anyone trying to understand Australian politics as well as contemporary debates around genocide.

Gammage - The Biggest Estate on Earth: How Aborigines Made Australia
Pascoe - Dark Emu: Aboriginal Australia and the Birth of Agriculture
Moorehead - The Fatal Impact
Posted by Resolute Reader at 6:17 pm