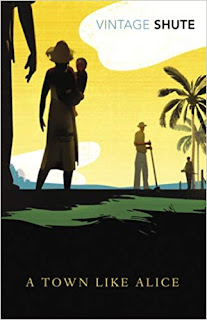 A Town Like Alice was an enormously popular book when first published in the 1950s, spawning films, TV-series and a radio adaption and remains in print. But reading A Town Like Alice in 2020 is a odd experience. Firstly there are some outdated concepts and language. Nevil Shute's language and descriptions of the aboriginal people in Australia would hopefully be deemed unacceptable by publishers today. Secondly the book feels old fashioned in terms of pacing and material. Yet there was something more to Alice that kept me going to the end.

The book is in three parts. It's told in overview by an ageing solicitor Noel Strachan who meets the books heroine Jean Paget and informs her that she has inherited a small fortune. As he gets to know Jean, Noel learns of her experiences in Malaya during World War Two, and helps her return to the country to build a well for the people who looked after her and other women who were separated from their families during the Japanese Occupation. Jean briefly meets a young Australian soldier who Joe Harman who she believes killed, but many years later she learns survived the war and has returned to his old life as a stockman on an Australian cattle farm. She visits the desolate Australian desert and, with her inheritance, turns the former gold rush town into a thriving hub of industry.

There is no doubt that Nevil Shute was a talented writer what is odd to 21st century eyes is his choice of material. For instance, much of the book is set around Jean's rebuilding of a local economy. On occasion readers might be forgiven for seeing this as a celebration of the Tory ideal of free enterprise, thrift and investment. Shute himself was certainly not from the left of the political spectrum, though his politics and writing seem far away from the neo-liberal ideals of the current Tory incumbents. Shute always seems to celebrate the hard labour and skills of ordinary people, and is Alice is anything to go buy he was ahead of his time in celebrating the role of women (though he is painfully keen to highlight the chasteness of his unmarried heroine).

In his other books Shute was vocal about his disdaine for left politics and the state of Britain. Alice has a sense of that (almost everyone in Australia, on meeting the very English Jean, asks her if everyone is still hungry because of rationing). Here he is very much celebrating the freedom he seems to see steming from relocating to Australia with limitless, empty land to be worked and plenty of aboriginal people to labour in the homes and on the farms.

His treatment of the aborigines is, of course, a reflection of the times. But it is also tremendously problematic. There's not attempt to flesh their characters out other than a racist trope of them being very happy (apparently like other black people are). Nor is there anything about them, other than the difficulties their habit of going "walkabout" brings for industrious whites on the farms. Jean sets up a ice cream parlour and doesn't hesitate to make sure that there is a separate room for the aborigines, run by a "coloured girl". This said, Shute is sensitive to how he writes about other non-white people. The Malay villagers he talks about very differently and there are several touching scenes as Jean talks to the Muslim village headmen about their time there.

A Town Like Alice is a product of its time. It's also probably a semi-historical document in its own right. Though dated, and to modern readers somewhat crude and in places reflecting racist attitudes common in the 1950s, I found myself quite enjoying it - though I doubt it will ever reach the levels of success it had in these more enlightened times.
Posted by Resolute Reader at 12:57 pm

I’ve often wondered how this book would read in a modern world. I read On the Beach a couple of years ago & it felt dated/stilted/constrained.
I suspect Shute had never met an Aboriginal person in real life so couldn’t write anything about them other a stereotype.

On the contrary, he lived for a long time in Australia and travelled extensively including with flying doctors and in the outback. I suspect he met lots of Aborigine people but I'm not sure he knew them...

I knew he’d spent time in Australia, but didn’t know about the time with the flying doctors. Interesting.