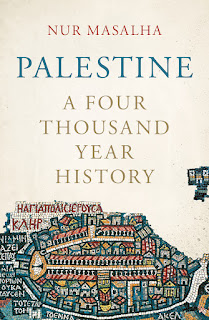 The Israeli state's war against the Palestinians is a travesty that continues to anger millions of people around the globe. Every atrocity that hits the news can be guaranteed in Britain to provoke protests that call for justice for the Palestinian people. Jeremy Corbyn's ongoing support for the Palestinians has meant that the question of Zionism - the ideology behind the founding of the Israeli state in 1948 - has become a major issue for the left and the Labour Party, as right-wing enemies of Corbyn seek to undermine him by portraying opposition to Zionism as the same as Antisemitism. I reject that equation and believe that socialists must show full solidarity with the Palestinian people, combined with an absolute rejection of antisemitism and all forms of bigotry and racism.

Nur Masalha's new book is an important contribution to our understanding of the history of the region. As Masalha argues, this history is contested and differing understandings of that history have been deployed by both the British colonial powers and the Israeli state since 1948.

Masalha writes in his introduction that:


Some Arab writers and artists promoting the political and national cause of Palestine or pan-Arabism create meta-narratives to depict Palestinian national identity or Arab nationalism as being more ancient that they actually are. Moreover, until the advent of anachronistic European political Zionism at the turn of the 20th century the people of Palestine...included Arab Muslims, Arab Christians and Arab Jews. Being a rendering of the Israeli Zionist/Palestinian conflict, historically speaking the binary of Arab versus Jew in Palestine is deeply misleading.

Masalha continues a few pages later to argue that "the Zionist liberal coloniser has often sought to combine 'settler-colonisation' with 'democracy' - two contradictory projects - and this tendency has in recent decade contributed to the emergence of the 'New Histories' of Israel." This new history, however, is a continuation of the process of hiding the real history of the region and Palestine itself.

The book begins with a detailed examination of the notion of "Palestine" from the bronze-age onwards. Masalha traces the origins of the term Palestine and shows, at different points, how it has been used by contemporaries to identify a place and a people. This contrasts, he argues, with ideological histories that base themselves in biblical texts, and have been used to undermine or subsume Palestinian history into an "invented tradition". For instance, Masalha explains that there is "no material history or archaeological or empirical evidence" for the 'Kingdom of David'. Nor, for instance, despite the systematic exploration and excavation of Egypt, is there any evidence for the Old Testament story of Moses "leading the 'Israelite tribes' from Egypt to 'Cana'an'." Indeed the name Cana'an is itself a "late literary construct". In contrast,


Palestine was the name used most commonly, consistently and continuously for over 1200 years throughout classical and Late Antiquity, from the highlight of classical Athenian civilisation in 500 BC until the end of the Byzantine period and the occupation of Palestine by the Muslim armies in 637-638 AD.

Despite the book's title, there is not a great deal of day-to-day history here. Instead Masalha studies the concept of Palestine, how it is discussed and understood by contemporaries. He cites many accounts, from different authors of many different backgrounds to show how Palestine has existed historically. All this is an important backdrop to the final third of the book which looks at the way that Palestine in the colonial period has been used and then denigrated. Masalha writes that the


English Industrial Revolution of the 18th century and rise of European capitalism impacted on the economy of Palestine directly and profoundly. These new forces also contributed to the reorientation of Palestine towards Europe and creation of a new political economy and statehood in mid-18th century Palestine.

But with British colonial rule came divide and rule. In contrast to the earlier, "fluid" boundaries in Jerusalem, for instance, "separating the lives of Palestinian Christians, Palestinian Jews and Palestinian Muslims", Masalha quotes one historian Salim Tamari writing about Jerusalem that the "quarter system signalling the division of the Old City into confessional bounded domains was introduced and imposed retroactively on the city by British colonial regulations."

Masalha shows how it was the support by the most powerful colonial power of the time for Zionist plans that made them mainstream. This was done, Masalha argues, out of a combination of colonial and domestic interests on the part of the British.

Few British politicians cared about Jewish people or their history. Many were openly antisemitic and wanted to encourage Jews to leave Europe. Others were religious evangelicals. But all were motivated primarily by a need to strengthen Britain's imperial project. To make it work they had to create a racist myth that denied the Palestinians their history and even their existence. Lord Shaftesbury, Chairman of the Palestine Exploration Fund said, in an oft repeated phrase, that Palestine was "a country without a people" for "a people without a country". Shaftesbury was a key figure in "biblical restorationism" and politicians like him believed that a "'Jewish Palestine' would be convenient for a British protectorate there along the main route to India". The motivation by the British was not out of altruism for Jews facing pogroms and racism, but to protect their imperial interests.

The creation of the Israeli state in 1948 in the aftermath of the Holocaust and World War Two was accompanied by the systematic destruction of hundreds of Palestinian towns and villages. New settlements were created on the ruins, and Masalha describes the ways that places were renamed as part of a creation of identity. As the author writes, "this massive appropriation of Palestinian heritage provided support for the European Jewish colonisers' claim to represent an indigenous people returning to its homeland after 200 years of exile." Later Masalha argues that this creation of a historical identity is key to the contemporary ideology of the Israeli state, "the treatment of the cultural heritage of Palestine as a tool for Zionist settler purposes is central to Israeli educational policies, the Israeli biblical academy and the Israeli government's renaming projects."

Masalha clearly demonstrates the way that the history of Palestine, a history where Jews, Arabs, Christians and others lived together peacefully for long periods of time, has been ignored, erased and destroyed in the interests of the modern Israeli state. This is detailed history that restores the forgotten past in the interests of a more just future for everyone, from all backgrounds and religions, in the Middle East.

I do however want to note a couple of minor problems. Firstly the book is difficult to follow in places, primarily because there are no maps which makes it hard to understand where various places are, particularly as names change frequently. I hope the publishers amend this for the paperback. Secondly in many places Masalha has included multiple examples to prove his argument, often leading to several pages of bullet pointed comments that are tiresome to read and unnecessary.

Those criticisms aside, this is an important work of history that has great contemporary relevance. I hope it is widely read and discussed.

Levi - If Not Now, When?
Rose - The Myths of Zionism
Posted by Resolute Reader at 6:40 pm