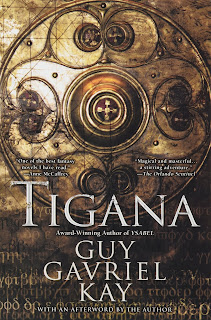 Having recently enjoyed Guy Gavriel Kay's Children of Earth and Sky I took Tigana from the library to read on a brief holiday. Sadly I was not as enamoured by this novel whose bulk became a hindrance rather than representing a satisfyingly detailed plot.

The Tigana of the title is a conquered nation. It's destruction has been so complete that the sorcery of its new dictator has ensured that no one can even hear its name. Tigana, now known a Lower Corte, is but one of a number of tiny states on the peninsula that forms the geographical backdrop for the story. Clearly based (as in Children of Earth and Sky, the map is barely disguised) on medieval Italy, the region is made up of a variety of city states and small countries vying with each other. But geo-politics are dominated by two competing magical warlords. Brandin, who destroyed Tigana and Alberico, his sworn enemy.

The story focuses on two areas. The first is the tale of a growing rebellion led by a small group of rebels to free Tigana, through killing the tyrant Brandin. The problem is that if only Brandin is killed, Alberico will simply take over. So freedom means destroying two enemy states. The second focus of the novel is events in Brandin's court where a woman from Tigana arrives as a concubine with the intention of killing Brandin, but eventually falls in love with him.

Unlike a lot of historical fantasy these characters are morally ambiguous and fairly well rounded, even if the vast number of them can be confusing. Brandin might be a fearful and violent tyrant, but he has his loving side too, causing his would be assassin enormous confusion. The rebels themselves are prepared to use any means necessary to further their cause, but their plan to free their homeland requires years of planning (and not a few nearly unbelievable coincidences).

Tigana is a complex novel. This, for me, was its major difficulty. There's simply too many characters, too much convoluted plot, and a few too many coincidences. I can't recommend it, despite enjoying Kay's book Children of Earth and Sky.

Kay - Children of Earth and Sky
A&B Strugatsky - Hard to be a God
Morgan - The Dark Defiles
Posted by Resolute Reader at 10:57 am