Arkady & Boris Strugatsky - Hard to be a God 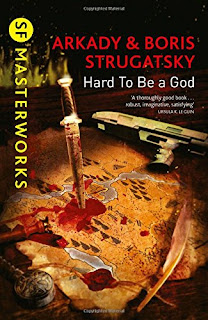 This is a really clever and original piece of science fiction that could only have been written by the brothers Arkady and Boris Strugatsky from their vantage point within the Soviet Union. Hard to be a God has similarities to a number of other more contemporary works, in particular the Culture novels by Iain M. Banks and I am certain Banks must have had it in mind when he wrote one of his more neglected SF works, Inversions.

The book is set in a future time when humans from Communist Russia are exploring the galaxy. Rather like the crew of the Enterprise in Star Trek they are banned from intervening in the human societies they encounter, but they do immerse themselves. Operatives spend years observing from within, recording behaviour through a circlet on their foreheads. The central figure to this novel, Anton, only removes his when he has sex; his partner assumes it is out of some religious conviction.

The fact that the operatives have sex shows that their observation of society goes beyond recording for scientific study. In their years on the ground they take on particular roles, and Anton rises to a significant height in the society of the planet he and his colleagues are observing. Their scientific framework for this is a slightly crude historical materialism, which suggests that societies evolve along particular pathways, with the superstructures determined solely by the nature of their economic base. On this planet, human society has become stuck in the equivalent of Europe's Middle Ages - the Arkanarian Empire is basically run by a lordly class who rule violently over a peasant society. The problem is that the framework for understanding this is coming unstuck; Anton sees, though his colleagues disagree, the development of a form of fascism that threatens the mass of the population.

At the heart of the story is the question of involvement; if Anton is right and fascism is rising, then surely he has an obligation to intervene to stop it. But if that happens the experiment is exposed and all their work is undone. But what sort of communist could stand by and watch the violence and terror of a dictatorship without wanting to intervene. There's a lovely little moment in the novel when an operative recollects that colleagues have frequently got pulled into this sort of active intervention in real events; he recollects an observer, a world leading expert on the French and German Peasant Wars, leading a peasant uprising on the planet and getting killed for his troubles.

My edition (Masterworks 2014) benefits enormously from a framing essay by Ken Macleod, which puts the novel and its authors in the context of events in the Soviet Union and their understanding of Marxist theory. But this is no crude attempt by the Strugatskys to shoehorn revolutionary politics into a SF novel. Hard to be a God is full of satirical comment on Russian society, gentle digs and comic moments. But it also raises real questions - how do you stop a fascist movement bent on eradicating knowledge and burning books? Anton knows the answer, the mobilisation of the masses against the reactionaries, but in an echo of the central point of the book (and the authors' philosophy) this proves impossible as the masses simply are not yet able to move in this way.

First published in 1964 and highly popular in the Soviet Union as well as abroad, the book has not dated much, partly because the writers don't dwell too much on the technology behind the observers' work. I highly recommend Hard to be a God, and am slightly surprised I haven't heard about it before. I look forward to digging out other works by the Strugatskys.

A & B Strugatsky - Roadside Picnic
Posted by Resolute Reader at 9:06 pm