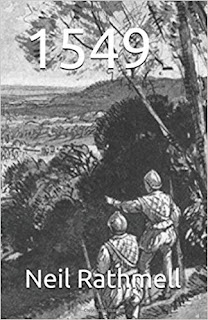 This is an unusual novel that deserves to be better known. Neil Rathmell tells the story of Kett's Rebellion of 1549, a major upheaval that shook Norfolk as tens of thousands of peasants revolted against rural poverty and the attacks on their communities. Rathmell tells the story from two perspectives; the first from Robert Kett's rotting corpse who recounts the history of the rising backwards to an audience of rats. Kett has been cruelly executed and his remains hung to remind the population of the folly of rebellion, but after death he celebrates the struggle and the value of resisting inequality and oppression.

In the second interleaved story a Norfolk merchant falls in love with his brothers' wife. From this perspective the rebellion is a disturbance that reflects the upheaval in their lives, but is also distant and remote. It is chiefly noticed for the problems it causes for trade, though the family is more closely involved in the rebellion than either of the major participants initially realises.

Rathmell knows the history of 1549 well though it might not be the best place for someone new to the period to start as the novel's structure means the history is told backwards. Nonetheless, while strange in places, Neil Rathmell tells a good tale with a fascinating backdrop.