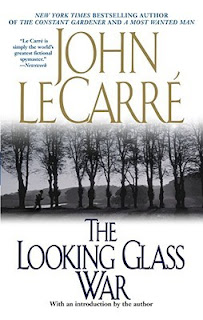 By all accounts John le Carré wrote The Looking Glass War disappointed that readers of his best selling The Spy Who Came in from the Cold was taken far to seriously, and not understood as the satire it was intended as. Looking Glass focuses on The Department, a section of British Intelligence that has left its wartime glamour far behind. Now, instead of an essential section of Britain's military machine, it is a poor second cousin to Smiley's Circus. Lacking funding, infrastructure and staff the Department is a spy network without any spies.

Beginning with a botched intelligence job, over some dubious intelligence, the Department is dragged into a dangerous mission in East Germany which senior figures clearly see as a last ditched attempt to regain wartime levels of funding, glory and acceptance in the Intelligence Community. The botched job is followed up by amateurish attempts to retrieve a roll of tape that nearly blows the whole thing open. Despite this, the Department's head Leclerc, a boorish former pilot uses his knowledge of Whitehall's bureaucracy to secure under the table funding to send a spy into East Germany.

The mission is, inevitably, a cock up. But what makes the book is the meticulous way that le Carré depicts the build up. Here are bureaucrats scheming against each other for funding and ministerial approval. Leclerc himself oversees much of the hiring of the Departments new spy, but is keen to keep from him the reality of his organisations eclipse. The former spy, now gone to grass in a second hand car salesroom is repeatedly told that the Department has "got boxes of files" of other operatives. Reality is, of course, exactly the opposite, and readers cannot help but feel that someone is being hung out to dry.

Much of this is presumably based on le Carré's own experiences. Infighting, competition and lies are the staple of government departments and spies. The grim, competing world of the Department and the Circus is a complete contrast to the glamour of James Bond. By the time that The Looking Glass War was finished Ian Fleming had published all of his Bond books. There's no doubt that le Carré was writing to stab that particular image of the intelligence services in the back. When people try to understand how Tony Blair's government could come up with something as crude as the 45 minute dodgy Iraq dossier, it's not hard to imagine some of these self-serving bureaucrats behind the scenes.

As with all the other le Carré novels that I've read, this is tightly written. It's grim and the characters are unlikable. Unusually, the plot matters little. What's really interesting is the tension between individuals and the nasty backstabbing world of the intelligence services.

le Carré - The Spy Who Came in from the Cold
le Carré - A Small Town in Germanyle Carré - A Murder of Quality
Posted by Resolute Reader at 10:22 pm