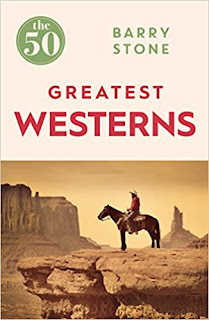 While it may not be apparent to readers of this blog one of my secret pleasures is the Western. I'm a huge fan of Sergio Leone in particular, and when I initially picked up this book I was mostly checking to see how the author's list tallied with my own. Barry Stone's justification for being the author of this book is that he too is an enormous fan, though his knowledge of Western films is far superior to mine, and thus I got a lot out of each of the fifty short pieces.

Reading through the list, I was struck repeatedly that the Western as a film is very rarely actually about the American West. For one thing, the Native American population rarely feature, and when they do (which is predominately in films from the earlier half of the 20th century) they are there are archetypal bad guys but even then they often serve to advance other stories.

Two films that Stone lists that do focus on the Native American experience (at least through the eyes of white viewers) include Dances with Wolves and Dead Man (the latter I haven't seen so I've added it to my list). But I was surprised that the 1970 film Soldier Blue didn't make Stone's list. I always saw this as both an attempt to graphically portray the brutality against Native Americans and as a comment on US Imperialism in Vietnam and elsewhere. It might also serve as a comment on the US Western as an art form.

But as with anyone "50 greatest" list there are going to be omissions here. I was however struck by the variety of films that Stone does include. Since there is a debate about what actually is a Western, it was brave of Stone to include Yojimbo and Seven Samurai both of which were enormously influential and have similar structures to classic western films. They are also both amazing films.

The list is slightly skewed by Stone's love of Quentin Tarantino. I enjoyed 2015's Hateful Eight in the cinema. But I'm not convinced it will stand the test of time and Morricone's  film score is not his greatest. I particularly enjoyed Stone's analysis of some of the earlier Westerns. He points out how they are often dealing with big themes, but also are very different to modern films. This isn't simply about levels of sex and violence, but also how films are structured. As he writes about 1959's Rio Bavo, "Modern audiences aren't accustomed to the pace of 1950s westerns... a story with a straightforward plot that director Howard Hawks decided should take 2 hours and 21 minutes to tell... Long scenes devoid of action exist only to add complexity to the film's characters..."

He also notes how "moments when what is normally conveyed with words is achieved instead with a look". It's striking that this (and the use of the landscape) is a feature of so many westerns. Think Leone's focus on eyes. The emphasis on the individuals and the personal is crucial to so many such films and stems, in my opinion, from the way that US society focuses on the individual over society. It's part of the reason why film's like Soldier Blue can go against the type. That said, as Stone frequently points out, these films were often making critiques of that very position. High Noon being one classic example. This too can frequently be missed by modern audiences. I've never seen Broken Arrow (1959) and would feel uncomfortable watching a film where white actors are blacked up to play Native Americans. But as Stone explains, "Although the film could have been a lot more respectful of Native American culture... it was for its time a very genuine and laudable attempt to make a film that didn't;'t simply follow Hollywood norms... If you can leave any sophisticated, enlightened 21st-century thoughts on racism at the door and approach this film with a 1950s mentality, you'll discover a brave film that attempted to chart a new course for the genre... Broken Arrow is a progressive film that suggests ways forward for a divided and deeply prejudiced nation".

It's points like this that mean that Barry Stone's list is more than simply his favourite films, but also includes movies that might be forgotten or dismissed. It's added more than a few films to my own list of must sees, and I'd recommend it to the fan of the western genre.