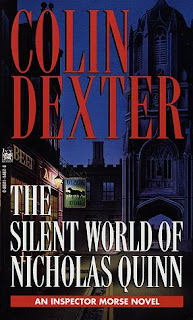 One of the great things about the Inspector Morse novels is that they are relatively timeless. Morse and Lewis don't have mobile phones and communication suffers as a result, but by and large the books could be set in contemporary times. Reading The Silent World of Nicholas Quinn I didn't realise that it was first published as long ago as 1977 until I checked the front of the book. Amusingly the thing that made me look up the date was a part in the plot where a character travels back from London to Oxford first class instead of of the second class his ticket allowed. On admitting this at Oxford the staff member tells him it doesn't matter. Try doing that on Virgin Trains today!

As with all Morse novels, little details like this matter even though while you read them they seem somewhat inconsequential. The Silent World of Nicholas Quinn is finely crafted in this regard. It is set in the dusty atmosphere of the Foreign Examinations Syndicate. A rather fuddy-duddy organisation that allows foreign students to sit British exams and then potentially get into English universities. Unsurprisingly, given that some of their biggest clients appear to be royalty in oil-rich Gulf states, there is a sniff of corruption, and when Nicholas Quinn is murdered, the reader is won't be surprised in the slightest.

Quinn is almost completely deaf, and until I read up about the book, I didn't realise that the sections that deal with his hearing difficulties (and which form a crucial plot point) were based on Colin Dexter's own experiences. In fact its this aspect of the mystery which actually means that Morse makes a unusual mistake and accuses the wrong person.

This is only the third volume of the series, and Morse's character isn't quite as well rounded as he is in later books. I was surprised by Morse's sexism in this book. In fact, at one point, Dexter has the detective's side-kick Lewis describe Morse (internally of course) as "crude" following a comment made about a female suspect. While I've noted before that Morse isn't actually that likeable, I don't recall Morse being quite so aggressively sexist in other books (though he frequently thinks and comments on women's looks and bodies) and this volume does also involve a pornographic movie as part of the story which seemed slightly odd. One of the problems with the TV series of Morse is that it made him much more loveable, and a lot less sexist and rude, and viewers can be surprised at the Morse of the books.

Despite the sexism, the plot is entertaining, though I always feel you're reading Morse as much for the atmosphere as the whodunit. The ending is, as I said, unusual, in that Morse get's it wrong initially - but that helps round out his character a little more - he certainly isn't the infallible Holmes type. More interestingly, Dexter uses a sort of Agatha Christie Poirot denunciation at this, perhaps to increase the embarrassment that follows Morse's mistake - for the character and the reader.

Like all of Colin Dexter's novels, this is a tight read. It's not the best Morse book, but it fills in some blanks and has some memorable clever moments.

Dexter - The Way Through the Woods
Dexter - The Dead of Jericho
Posted by Resolute Reader at 8:26 pm