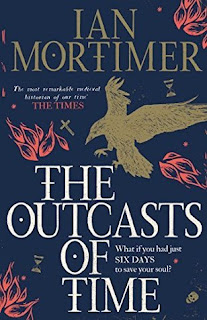 Outcasts of Time is a beautiful book. It tells the story of two Devon men caught up in 1348 in the horror of the plaque. John Wrayment is a skilled stonemason who has carved many of the statues in Exeter cathedral, including the faces of his beloved wife Catherine and his brother William Beard. William is more boisterous, interested in wine, women and song. John's attempts to do a good dead for a baby whose mother has died of the plague. His brother chastises him, arguing that it will bring them no good and only delay their perilous journey home. The good dead turns into its opposite, and in horror and anger, John question's God's purpose.

A disembodied voice offers the two brothers a choice. Return home, and die from the plague, or live six more days each day spaced at intervals of 99 years. The brothers take the second option and their journey through Devon's history begins.

It's a wonderful pretext for a novel. It's made better by Ian Mortimer's historical knowledge and eye for detail. There's plenty here on how the villages change, on how the improving fabric of the buildings themselves allow John and William to see that the country is growing wealthier, though neither brother is naive enough to miss the poverty in the backstreets. There are poignant moments, particularly when the brothers return to their home village and see places they know well, but ruined by age and decay.

John in particular, to William's annoyance believes he has a quest to full-fill. His attempts to do good, improve things take various forms - including simply doing a hard days work. But nothing seems to come of it. But the over-arching change, one that John finds particularly difficult, is the way his religion is taken from him and destroyed by the rise of Protestantism. He visits Exeter cathedral after the Reformation and is shocked to have to pay to enter, but even more shocked to see the destruction of the beautiful statues he has made. Later he comes to blame Henry VIII but he keeps his own faith close, despite it putting him and his brother in danger.

Mortimer does this transformation brilliantly. The brothers can understand technology - there's a touching scene in the 19th century when a clergyman explains steam engines - but they are more upset and shocked by the way that their religious framework has been dismantled. John is particularly troubled by this - if he is on a religious journey or quest, then why is his religion destroyed?

A friend of mine who read this said that they'd enjoyed it, but found it too religious. But for most of the last 800 years most people in England would have only understood the world through their religion. Mortimer's description of the transformation of England works so well precisely because he understands that the changes aren't simply technological, or political, but they are about how the whole ideological fabric of the country was remade. And he let's us understand what that might have meant to an ordinary person experiencing part of the changes. It is, after all, why many people took up arms to defend their communities and their faith during the Reformation.

It's a lovely original story, well told and deeply moving. I highly recommend it.