Christopher Hill - A Nation of Change and Novelty 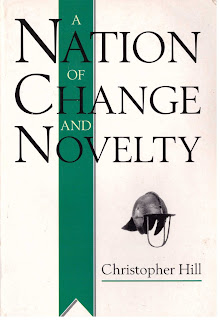 This book is a collection of essays proving how great a historian Christopher Hill was. They demonstrate exactly how detailed Hill's knowledge of the English Revolutionary period was, and his ability to make links between subjects and contemporary politics. They are also incredibly polemical, one, for instance Abolishing the Ranters is a strident defence of the very existence of that religious grouping which had been denied at length in 1986 book by professor Colin Davis. Hill shows his mastery of the contemporary literature, the source material as well as an understanding of his opponents writing.

Ultimately this is a forceful defence of the idea that there was an English Revolution. The book is was written ten years into Thatcher's government and at the time of the fall of the Berlin Wall - events that get passing mention in several essays. Hill is defending the idea of Revolution at a time when mass risings were taking place but the political framework of Communism was disappearing. Hill was too good a left-winger to believe that the regimes that were falling apart in Eastern Europe were actually socialist, but he understood that left wing politics were on the defensive. Colin Davies, for instance, "clearly regards [Gerrard Winstanley] as a pre-incarnation of Josef Stalin".

In this context, his essay The Word 'Revolution' is a wonderful piece of writing. It traces the development of the word Revolution through the Early Modern Period. At the beginning of the seventeenth century he argues, the word meant not the overturning of something, but a rotation of something. So when Gerrard Winstanley uses it, says Hill, he means that the "Diggers' object was not just to remove the Norman Yoke but to get back behind the Fall of Man, to a period outside history - the future millennium as well as Adam;s Paradise." There then follows a detailed summary of dozens of different uses of the word Revolution, each demonstrating an evolving use of the word through a period that saw Parliament challenge the King then defeat and behead him, followed by the return of the monarchy. But, in Hill's words:


1688 was a smudged compromise, and helped to prevent England ever having a revolutionary tradition in the sense that the USA, France and the USSR have revolutionary traditions. 1688 was 'glorious', bloodless, because fixed by an agreement between party leaders without involving 'the people' at all. If 1688 was a revolution, had there been a revolution in the 1640s? Voltaire in 1733 took for granted that the 1640s had seen 'une révolution en Angleterre', and this usage continued through the French Revolution to Guizot, to Karl Marx, and to European historical writing generally. But in England, although the shift in the meaning of 'revolution' had taken place well before 1688, the events of that year created new ambiguities. So we cannot think about the evolution of the word without thinking about the evolution of the society.

We also cannot think about it without the context of the times that Hill was writing in, and this is what gives his book a real edge. Hill also demonstrates a nuanced view of what Revolution was and is. In an earlier essay on Political Discourse he writes:


Historians who have failed to find long-term causes of the English Revolution, as well as those who have failed to notice that there was a revolution at all, have perhaps been looking for the wrong things in the wrong places. There were no revolutionaries who willed what happened, no Lenin: there were virtually no republicans in the Long Parliament. But there were tensions in the society, slowly building up in the decades before 1640: and there was an ideology, popularised by Fox and Beard, which in appropriate circumstances could become revolution, as it did in Cromwell.

Collections of essays are always hard to review even when, as in this book, they are discussing a common theme, albeit from many different directions. Some of the chapters here are heavily reliant on a detailed knowledge of a particular subject. I found Hill's article on Archbishop Laud nearly impenetrable mostly because I have very little knowledge of the specifics Hill writes about.

On the other hand, I thought the chapter on Gerrard Winstanley on Freedom was superb and I wish I had come across it earlier. Among many things Hill makes an important point that Winstanley writes about "mankind" rather than "man", meaning that he is including women in his vision of freedom, something that few (if any) of Winstanley's contemporaries considered. I also should highlight the chapter on radicals and Ireland in the period - which explains why they did not oppose the oppression of Ireland by Cromwell and others.

There is much in this collection for anyone studying the English Civil War and Revolutionary Period. Hill brings a freshness to these debates, even today, and his writing is full of humour as well as polemic. Surprisingly he also seems full of hope that thing will get better. He finishes his article on Winstanley with a comment and quote from The Diggers' leader which might well be written about Hill himself:


Winstanley failed; but his writings justify the words he prefixed to one of his Digger pamphlets: 'When these clay bodies are in a grave, and children stand in place, This shows we stood for truth and peace and freedom in our days.

Hill - The World Turned Upside Down
Hill - God's Englishman
Hill - Liberty Against the Law
Hill - The Century of Revolution
Posted by Resolute Reader at 5:52 pm