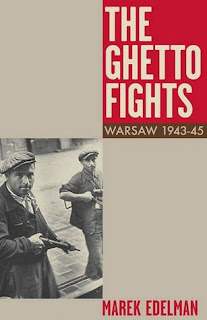 This month saw the 75th anniversary of the Jewish Warsaw Ghetto uprising against the Nazis. This prompted me to re-read this extraordinary account of the rising by Marek Edelman. Edelman was a socialist, a member of the Bund, an organisation of Jewish socialists, who, along with other groups, including radical left-wing Zionist organisations decided to resist Nazi attempts to deport Jews from the Ghetto to the concentration camps.

Hindsight makes it very difficult to read. We know what was to happen to those who were sent to Treblinka and other camps, but those in the Ghettos did not. Edelman's organisations began to get news from brave individuals about what was taking place, and they produced news sheets to explain to the thousands in the Ghettos what was happening. But it seemed to fantastic - as Edelman writes, "people who clung to their lives with superhuman determination were unable to believe that they could be killed in such a manner". When the decision to "liquidate" the Ghetto was made, the Nazis made the Jewish Council announce that all "non productive" Jews were to be deported, and ensured that the "Jewish police was designated as the agency to execute the deportation order". As Edelman explains this mean that the Germans "made the Jewish Council itself condemn over 300,000 Ghetto inhabitants to death".

It is hard to comprehend the callousness of the Nazis. But this deportation order came on the back of their systematic violence against Jews in the Ghetto - arbitrary killing and torture. The sections of the book that describe life in the Ghetto, with the constant threat from the Nazis, as well as the desperation of hunger and poverty of the inhabitants, are terrible to read. As are the accounts of the conditions in the areas were the Jews were gathered to face deportation:


The sick, adults as well as children, previously brought here from the hospital lie deserted in the cold halls. They relieve themselves right where they lie, and remain in the stinking slime of excrement and urine. Nurses search the crowd for their fathers and mothers and, having found them, inject longed for deathly morphine into their veins, their own eyes gleaming wildly. One doctor compassionately pours a cyanide solution into the feverish mouths of strange, sick children. To offer one's cyanide to somebody else is now the most precious, the most irreplaceable thing. It brings a quiet, peaceful death, it saves from the horror of the cars.

When the decision to liquidate all the Jews in the Ghetto is finally made, the groups of organisations that have come together to form fighting units eventually resist. With a handful of weapons, including a single semi-automatic machine gun, and homemade grenades they stop the Germans dead, killing dozens. Edelman rights that once the Nazis plan is clear, every house "becomes a fortress". In the midst of the horror, the resistance is inspirational, despite the fact that most of those fighting back are doomed by the German's overwhelming firepower.

At the same time heavy fighting raged at Muranowski Square. Here the Germans attacked from all directions. The cornered partisans defended themselves bitterly and succeeded, by truly superhuman efforts, in repulsing the attacks. Two German machine guns as well as a quantity of other weapons were captured. A German tank was burned, the second tank of the day. At 2pm, not a single live German remained int he Ghetto area.

Some of the fighters did eventually escape, some joining Polish resistance fighters, and their story did reach the world. After the war Marek Edelman wrote this book and it was published in Warsaw in 1945, then in English in 1946. It is an inspiration story, and demonstrates that contrary to many myths, Jewish people did not walk passively into the Concentration camps, but many fought back. Today we see the growth of the far-right across Europe, with a rise in racism, anti-Semitism and Islamophobia. In Eastern Europe we see fascists and the far-right beginning to gain real traction. The Ghetto Fights is an inspirational story to help us build resistance today.