John Molyneux - The Point is to Change it: An Introduction to Marxist Philosophy 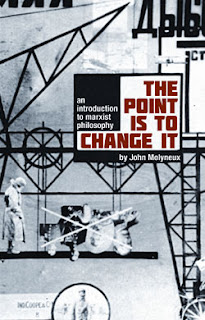 One of the myths about Karl Marx's work is that it is impenetrable  Certainly there are academics who have made a career from raising Marx's ideas to such a rarified level that they are impossible to understand by ordinary workers. In fact, some of Marx's writings are brilliantly clear, aimed at inspiring and educating workers, I think in particular of the Communist Manifesto or his account of the Paris Commune The Civil War in France.

That said, some of Marx's writings are harder than others. This is not because Marx was trying to encourage rarefied university discussion, but because the ideas he was grappling with were themselves complex. Marx built on the work of earlier philosophers, in particular Hegel and thus his early writings in particular are grappling with the language and concepts of more difficult writers and theorists.

Nonetheless, as John Molyneux has set out to show in this remarkably accessible book, the core philosophical ideas of Karl Marx are easy to understand. Molyneux has written this book explicitly to "a new generation of activists" who are new to the subject.

The book then begins by giving an overview of Marx's core ideas and probably unusually for a book on his philosophy, Molyneux also gives us a brief overview of Marx's economic and historical thought. In part this is because, as the author points out, Marx's ideas have to be taken as a whole, not as arguments that are separated from each other. More importantly though, this is because for Marx's ideas to really be a weapon in the struggle, they have to relate to the reality of activists lives, and an abstract discussion about dialectics that doesn't attempt to relate it to the real world, is worthless. Molyneux quotes Leon Trotsky on precisely this point, referring to revolutionary organisations and the Russian Revolution in October 1917:

"Bolshevism is not a doctrine (i.e. not merely a doctrine) but a system of revolutionary training for the proletarian uprising. What is the Bolshevisation of Communist Parties? It is giving them such a training and effecting such a selection of the leading staff, as would prevent them from drifting when the hour for their October strikes. 'That is the whole Hegel, and the wisdom of books and the meaning of all philosophy...'"

One of the great strengths of Molyneux's book is that he defends Marx from many of his critics. But by explaining why Marx's theory of history (for instance) cannot simply be reduced down to saying that only the economic base of society matters, Molyneux also draws out the very rich set of ideas that Marx had. For instance, the chapter on alienation brilliantly demonstrates how working people's lives are distorted by the treadmill of capitalism. This is something that effects everyone, but some have lives that mean they can escape, while the majority of us suffer. Marx writes:

This speaks directly to the experience of people today, who can watch the bankers award themselves with enormous bonuses, while the rest of us face the impact of the economic crisis that they caused.

Molyneux constantly tries to ground Marx in reality. A very important chapter on Marx's materialism makes the point that philosophy must be grounded in reality, quoting Marx again "In practice man must prove the truth, i.e. the reality and power, the this-sidedness of his thinking". To demonstrate this, Molyneux looks at two examples, the first is the  European Reformation, which mainstream history implies is a conflict between groups of people with differing religious ideas. Marxism instead, writes Molyneux, "sees the Reformation as fundamentally the ideological expression of the class struggle between the rising bourgeoisie and the old feudal aristocracy and of the transition from the feudal to the capitalist mode of production."

One of the aspects to Marx's thought that is often considered particularly difficult is dialectics. Molyneux explains that Marx "was the first dialectical materialist  This signifies for Marx, while historical development was driven by material forces and interests rather than ideas, the process of change was not smooth, gradual, mechanical or automatic." Molyneux explains dialectics as being fundamentally about change and the process of change. He shows how change, particularly social change, is a constant part of life. but dialectics is more than a theory of change. He continues, "dialectics... is a logic, a science of the forms of thought, designed to go beyond the limits of formal logic. Its is the logic of change, development and evolution." This might sound confusing, but Molyneux breaks down Marx's ideas on dialectics into easily manageable chunks.  This explanation rescues dialectics from the mechanical explanation often given by some writers in the past, and shows how dialectics is a brilliant thought tool to understand the world around us.

Despite being a short book of only 200 pages, this is one of the best introductions to Marx's ideas I have ever read. This is precisely because it is rooted in an attempt to make Marx's ideas accessible to activists and in turn, make them better activists. The chapter on dialectics for instance, is probably the single best explanation of the central concepts that I have ever read and a generation of students and campaigners will probably thank the author. The book ends with a short explanations of some of those who followed Marx, whose ideas have been  influential. The chapter on Lukács, Gramsci and Althusser, three thinkers who each tried to develop Marx further will be particularly useful for those of us who didn't encounter their ideas at university and often here them quoted. But Molyneux cautions:

"it is a vindication of one of the central themes of this book, namely the relationship between Marxist theory, revolutionary practice and working class struggle, that of our three major figures - Lukács, Gramsci and Althusser - the most useful philosophical contribution came from Gramsci, the revolutionary who had the closest involvement with actual workers in struggle, and the weakest from Althusser, who was most isolated and confined to the ivory tower."

In its own way, this sort book should make its own contribution to those struggles and arm a new generation of activists to think and develop revolutionary ideas and practice.

Watch John Molyneux speak on his book at the launch in 2012 here.

Molyneux - Marxism and the Party
Molyneux - Will the Revolution be Televised?: A Marxist Analysis of the Media
Molyneux - Anarchism: A Marxist Criticism
Posted by Resolute Reader at 1:46 pm