Aida Aleksia - Why We're Not Benefit Scroungers: Life with chronic illness or disability in modern Britain 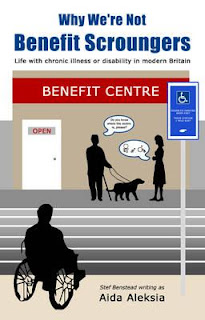 The current UK coalition government is engaged in a war on the poorest and most vulnerable people in British society. There is no other way of describing the "reforms" that are being introduced that will further impoverish and scapegoat people who rely on already meagre state benefits.

One of the worst aspects of government policy is the changes towards those who are disabled or chronically ill. Aida Aleksia's new book is an attempt to understand what these changes mean but also to give readers a sense of what it is like to be disabled or ill in modern Britain. It is not an easy read. In part, the collected case studies in the second half of the book, paint a frightening picture of life for those who are ill or disabled. But also hard is the way that Aleksia brings out the way that benefit changes are going to make life much much harder for those who often have little support in the first place.

The author begins with some statistics that highlight some of the problems:

Aleksia then points out, that income measures are not enough to cover true scale of poverty for disabled households  because "they don not acknowledge the additional costs incurred by disabled people because of their disabilities."

Here is the crux of the problem. Much of the benefits given to the disabled, or ill, are to help cover the extra costs that occur. They are not an alternative income, but are supposed to help the recipients work, or lead improved lives. One of the recurring themes of Aleksia' book is that disabled people want to work, but are often unable to. Either because employers cannot cope with their disability, or because the difficulties of travel etc.

This contrasts with government rhetoric. Surveys that show public perception is that benefit recipients are scroungers, or cheats, something that flows directly from Minister's speeches and tabloid headlines. In order to save money, the government has decided to cut the benefits bill, yet this is actually a tiny amount of money, and this perhaps betrays their real motives.

Aleksia points out, "the government has decided to cut 20% from the DLA [Disabled Living Allowance] bill; DLA comprises a mere 8% of the overall bill, and estimates by the Joseph Rowntree Foundation indicate that DLA payments are [already] inadequate."

In other words, the government is more concerned with tackling fraud (even though studies show this is at a low level - of the £12.6 billion in DLA payments in 2004/05 only 0.5% was due to fraud) than with providing for the needs of the ill and disabled.

Both the current and previous governments have also pushed privatisation. This means that the front line support for the disabled and administration of the benefits system is done by organisations whose driving force is the maximisation of profits. One example of this is the college for autistic adults mentioned in one of the case studies. In this college, teaching staff were made redundant and then had to reapply for their old posts on a 30% reduced salary. The manager who made this decision had previously run a dog food factory and had been hired for his financial experience, not his understanding of the needs of autistic adults.

More seriously is the question of Atos Healthcare. Atos is a IT company that runs the Work Capability Assessments for the Employment and Support allowance. Atos has been under immense fire for its procedures, using non-healthcare staff to make decisions that have dramatic effects on peoples lives for instance. Aleksia details both the awful process that someone going to Atos has to go through, as well as the wider issues. One major issue is that the decisions made by Atos are based on a computer program that has a set of very rigid questions. The person interviewing the client will also have to make gross generalisations. One example is that a claimant may be asked if they watch a particular TV programme. If they say yes, this might be interpreted as saying that the claimant is well enough to work at for that length of time. This ignores both the differences of sitting on a sofa in front of a TV and at an office desk. It also ignores the reality that even watching TV can be a difficult and challenging activity for someone who is ill.

I am not sure I agree with Aleksia's conclusion though that "Atos should not be pilloried for carrying out work as asked by the government". Her own examples demonstrate that part of the problem with the company is that in its desire to make money, it cuts corners and uses procedures that are inappropriate. The Citizen's Advice Bureaux reports on "rushed assessments, assumptions being made without exploration, inaccurate recording and poor recognition of mental health problems." Hence it is right that Atos has been targeted by protesters, though this must be part of a general campaign against government policy.

Aleksia argues that the problem for many disabled people is not a lack of desire to be part of wider society, or work, but social barriers that prevent them doing so. This contrasts with a "medical model" that starts with the disability, rather than the changes that could help someone. This might range from specialised equipment or improved facilities on public transport, to increased awareness of disability issues in the workplace. The individual stories in the second half of the book bring home this very clearly.

This is an extremely useful and readable book. The author deliberately avoids discussing why the British government is attacking disability benefits in the way it is. I think this is the old question of "divide and rule". By persuading the wider population that the benefit system is clogged up with scroungers and cheats, they can both reduce their welfare bill and turn us against each other. As the figures themselves show this is less about economics and more about politics. Aleksia's book is a very useful tool in overturning those perceptions and arming activists with the facts and figures they need to counter government claims. It is also a useful discussion on how modern society treats the disabled and what disability actually is.

I did notice one glaring error. The NHS did not begin as claimed, under a Conservative government led by Churchill, rather it was the post-war Labour government. Churchill did not return to office until 1951. It's unfortunate that this error is very early on in the book, as the rest of the facts, figures and quotes are heavily referenced and backed up by detailed research. So I have no hesitation in recommending this book as a weapon in the ongoing fight for social justice.

You can read exerpts from "Why We're Not Benefit Scroungers" on the author's website here.
Posted by Resolute Reader at 12:25 pm

Thanks for pointing out the NHS dates error! I have changed the manuscript so future prints will be correct.

No worries. Many thanks for writing this important book.