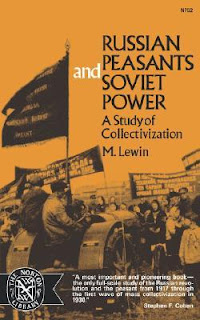 Moshe Lewin's 1968 book is a classic study of a crucial period in Soviet history. It provided ammunition for socialists at the time who argued that the Soviet Union was no longer socialist. The collectivisation of the peasants bringing farms and families together into larger "collective" farms (Kolkhoz) was one outcome that many Marxists believed would happen to the backward rural communities of non-industrial countries in the aftermath of the revolution. Lewin argues, in short, that what took place in the Soviet Union was an attempt by Stalin to accelerate the process in the interests of developing the countries economic base. The consequences of this were appalling. Lewin argues that around 10 million people were deported from their homes, often wrongly accused of being richer, "capitalist" peasants, known as Kulaks who were out to destroy the socialist regime.

The Russian Revolution of 1917 was the first time that a workers' movement had taken power. But Russia was not the industrialised country that most Marxists had imagined the first successful revolution would take place in. The defeat of further international revolutions, in particularly the one in Germany in 1919-1923, left Russia isolated. This enabled the growth of a bureaucracy who had their own class interests in society, and began to form a new ruling class. Russia was an immensely underdeveloped country from an industrial point of view.

Lewin points out that in 1928, the beginning of the crucial period for the peasantry in Russia, the peasantry was still 80 percent of the population. Despite attempts by the Bolsheviks to improve things, a 1930 report pointed out that in the "eleventh year since Lenin's decree on the wiping-out of illiteracy, we have still covered very little ground". What that meant in raw numbers was 61 million peasants between the ages of twelve and thirty-five who were semi, or totally illiterate. At this time, 5.5 million peasant holdings were still farmed using wooden ploughs.

The invasion of Russia by imperialist powers in the aftermath of the Revolution had further destroyed the countryside and left the country in crisis. In emergency situation the Bolsheviks were forced to appropriate food from the countryside, which helped to undermine the coalition between the workers and peasantry who had made the revolution. Much of the early chapters of Lewin's book is a comprehensive study of both the nature of Russian peasant society and the complex dynamics that took place between town and country in the years before and after the revolution.

In the years following Lenin's death and the retreat of the possiblity of world revolution, the question of the peasantry loomed large for the Soviet government. Part of the problem was that the existing peasantry continued to live much in the old way. They had their own class interests, which were not necessarily in the interest of wider society. The Soviet regime, particularly once Stalin had moved Soviet policy towards building "Socialism in one country", needed enormous quantities of food. This required the development of the farming areas, increased technologies and crucially, in the eyes of many Soviet economists, larger farms. But this contrasted with the needs of the peasants, who, liked peasants the world over, began from the needs of their families. Thus the poorest farmers and agricultural labourers the Batraks:

"aspired, like every other peasant, to become an independent farmer, to have more land and more implements with which to cultivate it. He would perhaps of been prepared to join an agricultural collective, the regime at that time not being in the least interested in collectivisation. Nor did anyone think of providing the batraks with more land and implements."

The governments' policies often recognised rural poverty, but offered very little to the poorest and certainly was in no position to systematically offer technology to the peasantry. Those incentives that were offered tended to benefit the middle and richer peasants. As a result, rather than encouraging collective farming, the financial contributions meant to encourage co-operatives tended to "reinforce the general trend towards individual farming".

The problem of the underdeveloped countryside grew for the Soviet regime. As Lewin points out;

"The rural sector was undoubtedly the weakest and most vulnerable point in the Soviet system. In this sector the greatest dangers lay in wait for the regime, and it was in this sector that the boldest policies and the most unremitting efforts were called for. And yet this was the very sector in which the fewest forces were deployed and to which the Party gave least attention.".

Nigel Harris has described the Soviet regime at this point has having the character of an "urban beach head in the countryside" this apt description reflects' Lewin's thoughts;

"The Party was fundamentally an urban one and it failed to learn from its experience during the NEP period, how to come to terms with countryside, how to devise more suitable instruments of administration and how to formulate an original policy which would serve the aims of socialism and the specific character and needs of the peasantry."

This indecision and lack of clarity in part was a result of the different ideological trends within the Soviet government. This is why the future of the peasantry in part depends on the crucial years of 1928 and 1929, the story of which form the core of Lewin's book. These years have three crucial parts. The first two are the defeat, in turn of the Left inside the Communist Party and then the Right, by Stalin. Lewin's description of Stalin's manoeuvres and his alliances that allowed this to happen form several fascinating chapters. Because much of these debates were tied up with Soviet economic policy, events in the countryside were an enormous part of these factional battles.

The third part was the economic crisis and the near famine situation that developed in 1928/9. The growth of Soviet cities put increased pressure on the peasants to provide more food. Towards the end of 1927 it became clear that there would be shortages, which led to the "procurement crisis" when the Soviet regime had to force the peasantry to sell food, often at a loss. Increasingly this took place forcibly, with peasants being fined and imprisoned if they didn't provide food. Interestingly, Lewin makes the point that the idea of using force against the peasantry was "unthinkable" to everyone on all sides of the debates amongst the leadership. What happened is that the need to do this, and the understanding that the peasantry would have to be forcibly reconfigured grew gradually out of the experience, and the propaganda that Stalin used against the peasantry.

Indeed, quite late on, there was no serious talk about collectivisation in rural areas. In 1925, Trotsky spoke of "the gradual transition to collective agriculture", indeed the "left" believed that "private farming would continue to be the dominant form in the countryside for a long time to come". In the aftermath of 1929 however, with the defeat of his rivals and the entrenchment of the cult of Stalin, the head of the bureaucracy began to understand that he might accelerate the process.

Lewin traces the evolution of Stalin's thought in great detail. He too, initially did not believe in collectivisation other than as a gradual process, requiring the "gradual application of socialist principles in agriculture". However by 1928, Stalin was talking about the peasantry as a class apart, even a "capitalist class" and in fear of future crises hampering the development of the Soviet Union's industrial base, Stalin began to find ways to accelerate the process of rural development, aiming to create industrialised agriculture.

A major part of preparing the country for this, in particular the Communist cadres that would be needed to drive this through. This meant the growing demonisation of the Kulaks as a class enemy of the Soviet regime in the countryside. From 1929 onwards a war was waged against the Kulaks, which often caught up many others in its wake. For some this was an opportunity to settle old scores, for others a chance to obtain the wealth of the richer peasants, for others simply a lack of understanding of the make up of the peasantry. The increased violence that was used, ultimately led to the deportation and deaths of millions.

Lewin asks, rhetorically, whether there was an alternative. Russia had to develop its agricultural base, but could this have happened without the "liquidation of the Kulaks as a class" and the forcible collectivisation of the population? Leaving aside the question of whether or not "socialism in one country" is possible, Lewin argues that there was an alternative. In fact, he points out that the agricultural part of the first "five year plan" that was authored eventually in 1929 was its most "realistic" part. The real problem was, for Lewin, the regime's failure "to pursue a policy aimed at increasing agricultural output among the small peasant farmers by the use of direct aid and co-operative methods".

The excesses of the period of collectivisation in 1929/1930 led even Stalin to realise he had gone to far, to quick. Yet the process began again later in the autumn of 1930. By this point, the Soviet's ruling elite had no longer any interest in developing society in the interest of the masses of people. Now their ambition was simply the strengthening of the economy so that the country could compete on an international level with the imperialist powers. Stalin had shown himself prepared to sacrifice millions of people in the interests of the new bureaucratic class.

Lewin's book is a powerful indictment of Stalin and Russia in the aftermath of the defeat of the international revolution. It is not an easy read, Lewin concentrates on the economics and politics of the period, often relying of dry Soviet documents and reports. While this builds a powerful case, the book lacks the voice of those who were the biggest victims of Stalin's policies. This isn't really a surprise, those who were "liquidated", deported or lost their livelihoods were in no position to leave records for future historians. As a result the dry statistics in this book cover decades of suffering. Lewin however has written a book designed not to discredit socialism, but rather to prove that the Stalinist regime had nothing to do with the struggle for a better world. In the 21st century, questions of farming, agriculture and the peasantry remain key issues for revolutionaries. Lewin's book, though aimed at a bygone era, has much to teach us for our future struggles.
Posted by Resolute Reader at 5:57 pm