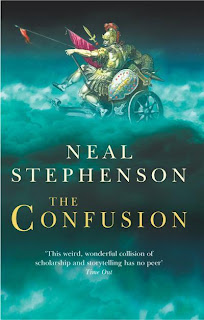 If the first volume of Neal Stephenson's Baroque Cycle Quicksilver could be said to deal with the emergence of capitalism and modern money markets, then the second develops these themes even further. But it is aptly named, for the novel deals both with the chaos and confusion in Europe in the aftermath of the English Revolution and emerging capitalism, as the old feudal order jockeys for position with the new financial interests. As Marx wrote, "everything that is solid, melts into air" and old certainties such as the profits available from gold mines, the allegiances of nobles and aristocrats are no longer trustworthy.

Like the first book in the series The Confusion is a massive, sprawling work. While centering on a few characters it trawls the length and breadth of 17th century philosophy, science, technology and warfare. When we left our characters at the end of Quicksilver, one had been sold into slavery and another was on the brink of a fortune. Elsewhere the birth of the scientific revolution seems to have stumbled as some of the key figures are distracted by other paths. In the case of Isaac Newton this is his obsession with alchemy, though he is pointed forwards again, as the battles between the Whigs and Tories (representing the old aristocratic order in the first case, and the new financial kings in the other) force him to tackle the important question of finance and money supply. Newton heads, metaphorically for the Bank of England just as our heroes are heading towards financial fortunes themselves.

This is a novel that roams from South America's silver mines to North African cities, and onwards to Japan and the mid-Pacific. It's a novel that deals in pirates and enormous sea battles. Near magical encounters with nomads in the plains in Asia and the problems of building seagoing vessels while fearing a pirate queen.

At times it does feel slightly over-written, and in places the author takes us of into diversions that are fascinating, but add little to the plot (except to tell us about a world in turmoil) or illustrate the great philosophical questions of the time. An immense character list means that on occasion Stephenson has to drop figures from the plot, giving them early retirement or untimely death. That said, the story telling is impressive and their is a wonderfully satisfying set piece revenge near the beginning of the novel that left me near breathless with excitement and relief. To say more would ruin well over a thousand pages of story telling so you'll have to read more.

Unlike volume one, this book didn't make me want to dash off and read other books to illuminate the period.  That reflects the confusion at the heart of the plot, a sense of the characters trying to work out what they want and need in the midst of a world that is transforming itself or risk being left behind.

The sheer scale of these novels means they need to be read close together, or the reader will risk forgetting the details and the characters. Which means I intend to find volume three as soon as possible.

Stephenson - Quicksilver
Posted by Resolute Reader at 10:49 am