E H Carr - What is History? 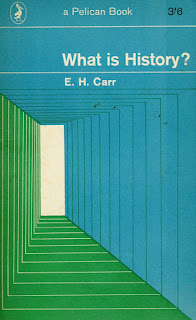 In his obituary of E H Carr in the magazine Socialist Review the British Marxist Duncan Hallas wrote that "The death of an eighty year old academic and former Foreign Office official who never, at any stage in his long life, had any connections with the working class movement, would not normally be worthy of remark in this journal." Yet, he concluded about Carr's monumental history of Russia that the

"significance of Carr is that he made it impossible for anyone who can read English, and who is not incorrigibly idle or idiotic, to believe in either the bourgeois or the Stalinist myths about the outcome of the Russian revolution. And that is a good deal."

That someone like Hallas would heap such praise on E H Carr is testament to the importance of Carr's writings. Most people will not read Carr's 14 volume history of the Russian Revolution's rise and fall. Far more will encounter Carr's little book What is History?  This is a series of speeches that he gave at Cambridge University that tackle some of the trends that appeared in historical writing and some of those who argued that history was some sort of neutral subject removed from time and space.

Carr puts his position at the start of the book:

"'What is history?' our answer, consciously or unconsciously, reflects our own position in time, and forms part of our answer to the broader question what view we take of the society in which we live."

Historians cannot, Carr argues, remove themselves from their particular beliefs, prejudices, politics or historical context and this means that when we read their history we need to view it with that in mind. To give one example, Carr writes of the historian Grote, a radical banker writing in the 1840s about ancient Greece and Rome:

"It may not be fanciful to suggest that Grote's neglect of the problem of slavery in Athens reflected the failure of the group to which he belonged to face the problem of the new English factory working class."

Carr also rails against those who believe there is "no 'objective; historical truth".

"In place of the theory that history has no meaning, we are offered here the theory of an infinity of meanings, none any more right than any other - which comes to much the same thing. The second theory is surely as untenable as the first. It does not follow that, because a mountain appears to take on a different shape from different angles of vision, it has objectively no shape at al or an infinity of shapes."

Over the course of his speeches, Carr marshalls an impressive list of examples and quotes from extensive reading. As an example of the selective process that history writing can take, he discusses Gustav Stresemann, Foreign Minister of the Weimar Republic who kept enormous quantities of papers documenting his historically important role. On his death these were published in 3 large volumes, but the selection process filtered out to concentrate on Stresemann's work relating to the West, rather than Russia and the East. Hence for readers (and future historians) Stresemann's papers implied that he worked more closely on matter's pertaining to relations with France and England, when in reality the opposite was true.

Later these volumes were condensed still further, a distillation of the selection, further hastening the process. So far so interesting, but Carr takes this further pointing out that the records themselves were not an objective truth, they were Stresemann's own version of what had happened in innumerable meetings. They "do not tell us what happened, but only what Stresemann thought had happened, or what he wanted others to think, or perhaps what he wanted himself to think". The process of selection was begun, not by historians but by the participant himself.

Students of history should of course already understand this, but Carr's brilliance is to put the story in the context of wider debates about the nature of history as science and subject. As he concludes the first speech with, "My first answer therefore to the question 'What is history?' is that it is a continuous process of interaction between the historian and his facts, an unending dialogue between the present and the past."

Carr challenges those who believe history is the work of accident, or simple causality. A typically amusing comment illustrates that those who hold these views often do so because of their historical place:

"In a group of nation which is riding in the rough, not on the crest, of historical events, theories that stress the role of chance or accident in history will be found to prevail. The view that examination results are all a lottery will always be popular among those who have been placed in the third class."

He also discusses the role of "great men" arguing that:

"The great man is always representative either of existing forces or of forces which he helps to create by way of challenge to existing authority. But the higher degree of creativity may perhaps be assigned to those great men who, like Cromwell or Lenin, helped to mould the forces which carried them to greatness, rather than those who, like Napoleon or Bismark, rode to greatness on the back of already existing forces."

Astute readers will notice that Carr does two things here. Firstly his discussion of the role of individuals in history is close to what Marxists might argue, and secondly he discusses Lenin and Cromwell. Carr, as Duncan Hallas understood, was no revolutionary, in fact he was the opposite. Nor was he are Marxist, but he did value and understand Marx (and others like Lenin and Trotsky). The speeches here are liberally sprinkled with quotes from Marx (to an extent that contemporary historians would probably blush at) and Carr is clearly conversant with the writings of these three revolutionaries. His own vision of history as a process of constant change has a lot in common with Marx:

"History is a process of struggle, in which results, whether we judge them good or bad, are achieved by some groups directly or indirectly... at the expense of others."

Marx and Engels put it that "history was the history of class struggle" and the use of the more ambiguous word "groups" in Carr's quote reflects his disagreement with Marx, that class is the major division in society. Nor was Carr writing history to understand the past in order to change the future, in fact, if anything, he thought that such an aim was impossible.

The length of this review will no doubt, alert you to the fact that I was absolutely charmed by Carr's writing. That said, my enthusiasm for this book is about more than its charm. Marxists and others will be able to pick holes in Carr's arguments, but no serious student of history (of any political persuasion) can afford to ignore the ideas and arguments herein. This is a stimulating and enjoyable book that will make every reader think through their own ideas. It is to be recommended.

Posted by Resolute Reader at 9:10 pm