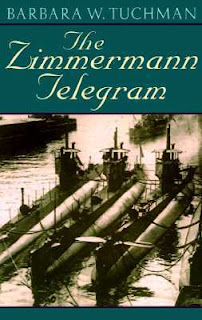 When the US President Woodrow Wilson delivered his "war message" to Congress on April 2 1917, he was taking his country into a war that had already cost the lives of hundreds of thousands of Europeans. He was also making a startling personal political reverse. Only three months before, he had declared that to take the United States into war would be a "crime against civilisation". Indeed he had spent much of the previous years trying to help broker a peace, without victory between the European powers.

What caused this reversal? Wilson himself seemed committed to peace. He was narrowly re-elected, in part because of his slogan "he kept us out of the war" and there was a substantial anti-war population in the country. One of the key factors that changed his mind was the Zimmermann Telegram. The story of the interception and decoding of this message forms the core of Barbara Tuchman's history of the US entry into World War One.

Zimmermann was the German Foreign Minister. An able and intelligent politician he, like many German's believed that the entry of the US into the war would be a bitter blow to their hopes. But he also believed, that the potential for unrestricted submarine warfare against Allied shipping, as well as vessels belonging to neutral powers who were supplying their enemies would bring the war to a rapid end. Their was some reality to this. By 1917, Britain and France were suffering the effects of years of naval blockade and the  warfare on the Western Front. The trick for Germany was to engage in this unrestricted conflict and delay or prevent the United States coming into the war on the side of the Allies.

To do this, Zimmermann hoped to bring Mexico and Japan into a war against America. Today this seems fanciful, but then, there were real indications that it might have been possible. Tuchman documents many examples during the preceding years of popular belief that Japanese soldiers were training in Mexico and that Germany was funding Mexican revolutionaries. Not all of these were rumours, some were rooted in reality, and it was not an impossible belief that overtures to the Mexicans might lead to a war that would occupy America's time.

The reality is, of course, that Mexico was unlikely to ever engage in a serious war with the United States, even if in recipient of Germany support. The German's however thought there was, though their initial dreams of an uprising by American-Germans against war with the mother country were quickly dropped.

The Zimmerman telegram then, pandered to the prejudices of both sides. When it was first revealed to an incredulous American public it sent shock waves through the population. When Zimmerman admitted that it was real, the country was set on course for war.

Tuchman points out though, that the Telegram was not the only trigger. If it hadn't been that telegram, she says, Germany would have done something else. Nor did the telegram turn Wilson from pacifist to pro-war overnight. Wilson was moving in that direction because of the pressures of global politics and the realities of German militarism. Interestingly, Tuchman points out, that a final key factor was the February Revolution in Russia. The end of Tsarism meant that for Wilson, the arch-democrat, the war could now be portrayed as a war in defence of democracy. Whatever the interests of America Imperialism, Wilson's particular liberal consciousness was comforted.

Sadly The Zimmermann Telegram is a somewhat disappointing book. Tuchman's other works, that I've reviewed, particularly her Guns of August and her history of fourteenth century Europe are excellent works of popular history. Zimmermann on the other hand feels like a plodding diplomatic history of the entry of America into World War One. A top down history that leaves the reader lacking in a real sense of the mood in the majority of the United States. While the stories of spying in Mexico and the interception of telegrams is exciting in parts, the book is probably aimed more at an American readership trying to understand a key point in their country's history, rather than the general reader.

Tuchman - The Guns of August
Tuchman - A Distant Mirror: The Calamitous 14th Century
Tuchman - The Proud Tower: A Portrait of Europe Before the War
Posted by Resolute Reader at 9:19 pm

Barbara Tuchman is a superb writer. I have read this book but a long while ago. I am thinking of getting a copy in a Folio edition.

The reality is, of course, that Mexico was unlikely to ever engage in a serious war with the United States, even if in recipient of Germany support. The German's however thought their was, though their initial dreams of an uprising by American-Germans against war with the mother country were quickly dropped.

Who writes this kind of English and professes to know anything about writing and reading?
Read it and weep.