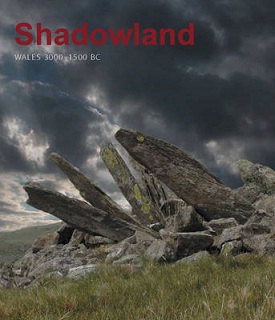 Produced by the National Museum of Wales, this is a lavishly illustrated, short but comprehensive guide to a distinctive period of Welsh history. 3000BC to 1500BC effectively corresponds with the end of the stone age and the late bronze age.

The title of the book, Shadowland, sets the tone for Steve Burrow's explanation of these fifteen centuries. The people, he argues, are like shadows on the Welsh landscape. Almost nothing of their daily lives has been found. Few homes, few farms, few implements. Even the relatively common post-holes that normally mark the locations of ancients homes are few and far between. This is not to say the lands were unpopulated. What these people did leave us were extensive funerary remains. We also know a great deal about specific areas of their lives - extensive copper mining at Great Orme for instance. We can infer a great deal, but we cannot say much specifically about their lives.

Burrows takes us sytematically through what we do know. From the shapes of flint knives and tools, to the standardised burials we find, surprisingly, that there tended to be common styles or fashions across what is now Wales. It is tempting to view this as a common culture, but Burrows argues that it is unlikely that there was a single unified cultural set of beliefs across the area. Rather there was an extensive trading and communication network throughout Wales and England, stretching into the European continent.

This network is best imagined through the enormous distances that the stones for Stonehenge were brought from Wales. But goods, ore, designs and on occasion funeral soil appears to have been moved, often great distances, to places of use or symbolic importance.

This cultural unity is unusal when compared to even a few years later. At the end of the book, Burrow's makes the point that by the time of the Roman arrival, they described Wales as being dominated by just four tribes or kingdoms. Very different to the period under consideration.

The book takes up many recent debates and arguments in archaeology. Burrow's argues that there probably weren't a specific "beaker people" for instance, despite the preponderance of this style of pottery across the region.

Despite the occasional academic feel to the book, this is a readable introduction to the period. It's a tragedy of modern nationalism that we feel the need to examine an areas pre-history through the lens of a country that didn't exist thousands of years ago, whose people and economy couldn't have been seperated out geographically in the way, say the British Isle and Europe can be. Nonetheless, this is a good book to read if you're trying to get to grips with early human history in these isles. I shall look forward to reading the authors, earlier, companion book.

Burrow - The Tomb Builders
Pryor - Britain BC
Posted by Resolute Reader at 2:02 pm