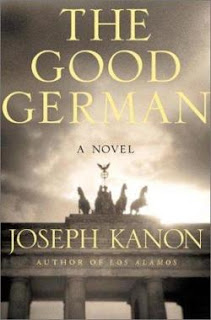 Partly because of its setting, this is an unusual detective story. Set in the midst of the ruins of Berlin in the immediate aftermath of the European theatre of the Second World War, the hero is no detective, but a journalist, sent to the capital to cover the Potsdamn Conference. At the conference, our hero, the oddly named Jake Geismar, finds a body in a lake, and begins a quest to explain what's happened and get his last, great wartime story.

Like many detective novels, there are coincidences aplenty. The author however gets away with alot because his descriptions of the destroyed city and the people who continue to survive there are amazing. Perhaps the author gleaned his knowledge of the streets from Google Maps, but I suspect that he has sat down at a cafe in the Oliverplatz.

More interestingly, Joseph Kanon is an expert at portraying the weird duality of life in postwar Germany. The struggle for food and survival, and for identity. He captures those who haven't quite comprehended what's happened. In a clever bit of dialogue a young German woman is hoping to escape to London with her lover, a British Soldier. She imagines it all destroyed, like the Berlin around her, and cannot believe Jake's assurances that London is not flattened. But they told us it was, she says, refering stubbonly to the wartime propaganda.

Oddly the rather strange and convoluted plot seem to matter little because, to use a cliche, the real hero of the novel is the city itself. Nonetheless, the complicated strands are drawn together well, and tightly, and the ending is unsatisfactory, because it is dealing with the contradictions of Berlin in 1945. The Potsdam Conference that opens the story is the beginning of the end of the wartime Allies. By the end of the story, the world's two superpowers are jokeying for position and often the pawns in their game are some of the Germans who made the war possible. Dealing with the consequences of that, meant ignoring some of the more unpalatable truths about wartime behaviour. The solution to Jake Geismar's puzzle is rooted in that, and it creates an excellent bit of tension.
Posted by Resolute Reader at 8:17 pm