Emir Sader & Ken Silverstein - Without Fear of Being Happy: Lula, the Workers Party and Brazil 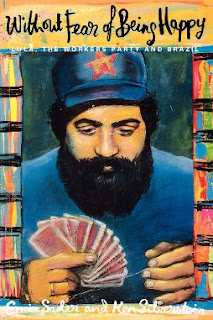 The election of Lula as President of Brazil in 2003 was one of a series of left wing shocks that shook Latin America in the early to mid-2000s. Lula, the undisputed leader of the Brazilian Workers Party had long been seen as a far left opponent of the Brazilian ruling class.

This early book was published in the aftermath of Lula's failed attempt to win the Presidency in 1989. Lula tried again in 1994 and 1998 before winning in 2003. As such, the book is very dated. But its usefulness in part stems from its examination of the Lula's own early politics and the development of the Workers Party. For those of us who are engaging with Brazilian radical politics for the first time, this history is invaluable. Though I would suggest that people who would like a more up to date discussion of Lula, Brazil and the Workers Party look at more recent publications, such as Sue Branford and Bernardo Kucinski's book Lula and the Workers' Party in Brazil.

Lula took office declaring that ""my government will be for the excluded, the discriminated, the humiliated and the oppressed." While those hopes rapidly diminished, his statements reflect the radical origins of his party and his own politics. Lula comes from a poor, indigenious background, he rose to help found and lead the Workers Party as a reaction to the poverty and oppression that he saw. This short book examines well the recent history of Brazil, the time of the dictatorship that saw living standards crash and rights eroded. The growth of the Workers Party organically from a series of mass strikes and systematic campaiging are one of the reasons the party had such a root amongst the working class. The authors detail both the hard work that Workers Party activists engaged in, as well as the problems their approach took.

The Workers Party prided itself on breakign with that they saw as old forms of organsing the left. The authors are keen to describe part of the success of the party, as being due to Brazil lacking a large, leftist tradition. While in its early years, the Workers Party was absolutely clear that it was fighting for a transformation of Brazil towards a socialist economy, it lacked a clear theoretical understanding of how that would be achieved, and what it meant. Since much of its work concentrated on electoral success, this lead to major problems, particularly when Workers Party mayors found themselves clamping down on strikers in the cities they controlled.

The story of Lula's 1989 defeat makes up the final pages of this book. It's a fascinating story, because it shows the fear with which the ruling class of Brazil, and the United States had for a potential Lula victory. The Brazilian establishment closed ranks around its chosen candidate and Lula was defeated, in part by a series of dirty tricks. However, it was also clear that the Workers Party had failed to build deep enough roots in the wider non-working class population. In this regard, the sections on the Workers Party's early rural programme are particularly useful.

Sadly Lula's eventual victory in 2003 did not hold up to the ideals that are described in the short interview with him in the back of the book. This interview is probably worth digging out, for it shows the principles with which Lula fought the 1989 election. Early allegations of corruption and his pro-business policies that led to Lula clamping down on left wing deputies marred the first few months of his presidency. The mild reformism with which he governed has done little to benefit the ordinary people of Brazil, though it didn't stop him winning a second election and the Workers Party winning a third. The formation of the PSOL as a radical alternative to the Workers Party was one response, but that story is far ahead of the period covered by this early work.

This is my first comment here. Yesterday a Net search on Hans Zinsser led me to your blog, which you ought to announce as "Established in 2005", on a nice little ribbon with forked ends, like the proud old enterprises. Those 7 long years impressed me because I finally started one of my own just a few weeks ago, on April 23. It's called "Transcripciones" (www.transcripcionesreveladoras.blogspot.com).

The search had to do with the transcription I'm working on right now, which is the Spanish version of the narration of a documentary on smallpox. At the moment there are only two of them that include the original English version as well as the translation, and eventually there will be a third and last one (about the building of the Panama Canal), so my site will be of little use to those with no knowledge of Spanish, but I will translate any of the other subjects on request.

I placed your blog on my Favorites list for three reasons: 1) its attractive graphic design is a good model to follow and will encourage me to improve on the still elementary appearance of mine, 2) the range of your readings is amazing and it reminds me of the way I went through life buying loads of used books (and magazines) on all kinds of matters (I was born back in 1951, barely six years into the postwar period) and 3) you're to the left on the political spectrum.

…which brings us to the present review. Yes, Lula da Silva, like Tony Blair and the leader of the PSOE in Spain who used to be President years ago (F. González?) is now part of what the Soviet textbooks called the "working-class aristocracy". His successor, an ex-guerrilla fighter, is also a traitor to her own ideals. He's no more than a populist and a demagogue now, and he's constantly reminding us that he managed to pull I don't remember how many millions out of poverty, which is not at all credible.

In fact, that's exactly what Alvaro Uribe Vélez, our previous president down here in Colombia, literally a thief and a murderer, is constantly repeating. In his eight years (two successive periods) poverty is supposed to have dropped miraculously from 60 to 30 percent of the population. This is an outrageous lie. When he was governor of his native state ("departments" they call them here, similar to Japanese prefectures) he committed many atrocities, including massacres, for which a coalition of NGO's is trying to drag him before the I.C.C.

You might be aware of the fact that this monstrous character was invited by the U. of Cambridge to give a lecture there a few years ago. On that occasion I sent a mildly threatening e-mail message complaining about it, and, not surprisingly, there was no reply. Not too long ago Georgetown U. in Wash., D.C. decided to do the same thing.

If you can read Spanish I suggest you read journalist Olga Behar's book El Clan de los 12 Apóstoles, which furnishes the incriminating evidence against Uribe V. that might eventually take him before the said court, but one can't be too sure about this. The Court seem to be pretending to be fair and all they do is go after the Africans and the Serbians. Colombia is off bounds because it's a U.S. ally. The title alludes to a group of paramilitaries one of whose members was a priest, which is why it was thus named by the locals. Another one was one of Uribe's brothers.

She co-authored and has recently published El Caso Yair Klein, about the Israeli soldier of fortune who was hired to train the paramilitaries here. Klein was interviewed and told all in his home in Yafo, Israel. I'm challenging you to review those two explosive books.

I don't go around waving flags and complaining too often, since it's not my quarrel. It's just that 1) one's commitment must always be to the truth, and 2) being lied to is annoying.

Thank you for your kind and friendly words. Indeed, established 2005 would be a fine addition to the 'blog. Perhaps I'll take you up on that.

Sadly, I am not able to read Spanish, so much of your own 'blog and your recommendations will remain closed to me.

I am however, reading widely on the history and politics of Latin America, as I am heading to Rio in a weeks time. An exciting trip of its own.

I hope you continue to enjoy the reviews.

…too late for the Rio Carnival but on time for the Rio + 20 event, which tells something about the traveller's commendable priorities….