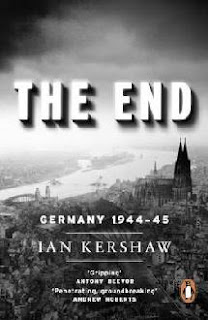 There will probably never be an end to the publication of books about World War Two. The sheer scale and horror of the conflict, combined with the enormous numbers of people involved, both as combatants and non-combatants will produce an endless variety of viewpoints and histories. Two of the big names have new books about the war out now, or in the near future, and I suspect that I'll join those who read Max Hastings or Antony Beevor eventually. Despite their brilliance as writers and historians, it has to be open to question how much more they'll add to the discussion.

On the other hand, Ian Kershaw's latest book is a very different work. Kershaw is famous for his studies of Hitler, including an exceptional two volume biography, which is reviewed in detail here, by the British Marxist Alex Callinicos. In The End Kershaw turns his hand to the last year of the European war. His approach is to ask a seemingly obvious question, which, it turns out, is remarkably difficult to answer simply. Why did the Germans keep on fighting despite the obvious facts that they were military defeated?

Kershaw makes the point that most countries, faced with military defeat eventually seek terms. Germany didn't. The fact that they kept fighting right up to the moment that Russian troops arrived near Hitler's bunker and the Dictator finally shot himself, brought immense destruction upon the German people and country. Kerhsaw sums it up:

"In the ten months between July 1944 and May 1945 far more German civilians died than in the previous years of the war, mostly through air raids and in the calamitous conditions in the Eastern regions after January 1945. In all, more than 400,000 were killed and 800,000 injured by Allied bombing... The Soviet invasion then occupation of the eastern regions of Germany after January 1945 resulted in the deaths.... of around half a million civilians... Had the attack on Hitler's life in July succeeded and the war been promptly bought to an end, the lives of around 50 per cent of the German soldiers who died would have been saved."

There are many more similar statistics that Kershaw uses, that only underline this point. The attempt on Hitler's life in July 1944, was a turning point and its right that Kershaw uses this as the pivot point of his book. Its not so simple to suggest that had that succeeded, all would have been ok. Kershaw himself points out that at that point in the war there were sufficient numbers of fanatical Nazis alive who could have precipitated civil war in an attempt to keep the wishes of the Dictator alive. But Hitler was a lynch pin. Kershaw describes his rule as charismatic, and puts him, as he did in his earlier works, at the centre of a network of belief and bureaucracy that generated its own momentum.

This momentum meant, that in the midst of collapse the bureaucratic state machine that Hitler headed up, continued to function. During the last seconds of the war, civil servants sat at their desks under a hail of Russian missiles, completing meaningless paperwork. On the Western Front, police men filled out requisition forms for replacement buckets damaged in bombing.

So were the German people simply mesmerised by Hitler? Kershaw argues not. He points out that in places people did rebel against the regime (though usually in an act of last minute desperation, rather than an organised uprising. One exception seems to be Cologne, where a small scale rebellion took place, which was ruthlessly put down). Central to Hitler's ideology, and indeed to much of the inter-war year German Nationalist arguments was the concept of the "stab in the back" that took place at the end of the First World War. The German Revolution of 1919, that effectively ended Germany's part in the First World War and brought the conflict to a close involved millions of people in a genuine mass revolution. Hitler was terrified that this would reoccur and much of his activity in the last months of the war was geared to preventing this.

So, in addition to the ruthless nature of the regime, and in particular in the aftermath of the attempted coup in July 1944, Hitler removed even more of those who, from top to bottom of the system, might be seen as potential internal enemies. By doing this, he selected, particularly in the armed forces, for even more fanatical and brutal officers, which helped to make the war even more prolonged. In addition, the reality of war, particularly on the Eastern Front meant people fought, because they had nothing to lose. Soviet territories had been subject to a horrific onslaught by the German army, and their response, was brutal. German propaganda portrayed the "Bolsheviks" as brutal monsters, though the reality for many wasn't far off. This helped to provoke individual Germans to even more bitter defence, prolonging the war and making fear of occupation even greater.

Those who ran away were killed or returned to the front. The top of the German hierarchy, in particular the Nazi party ensured that continued right to the last moment. Those immediately below Hitler were all, at particular moments, convinced that the end was near. Interestingly, Kershaw points out that the particular nature of the dictatorship meant that there was no easy way that this could be achieved. The need for the individual leaders to build their own power base, at the same time as jockeying for favours from Hitler meant they were a band of warring brothers. Constantly worried about their own position and never able to form a block against the Dictator. This contrasts, Kershaw points out, with Italy, where the monarchy and Fascist party formed a block which could oppose Mussolini at times, and did, eventually stop him. Despite the misgivings of the German leadership, few acted in ways that would have curtailed the war, saved lives, or challenged Hitler's madness. This condemned millions of death, injury and suffering.

The End contains much more. The stories of the last days of particular towns can be heartbreaking. The senseless murder of individuals who had had enough and wanted to stop. The continued murders in the Gas Chambers and the death marches of concentration camp victims, that took tens of thousands of lives, right up to the last moments of the war, the stories of refugees and bomb victims, as well as the soldiers who lost their lives trying to capture some last redoubt, where some fanatical Nazis refused to give in, are horrific, and perhaps unique to this conflict. Also telling are the stories of the higher ups, who used their position to better themselves and save their families even to the last moment, then abandoned their principles rapidly when all fell to pieces in front of them. 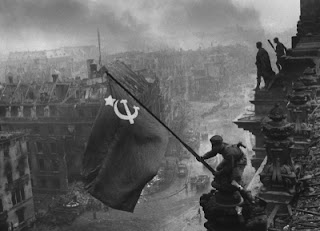 One final aspect of Kershaw's book that was new to me, was the way that he points out that Hitler's death didn't simply precipitate an immediate end. Hitler's successor, Admiral Donitz kept the war going as long as he could, in the belief that he could save troops from the Eastern Front. In part this was a naive belief, shared by many in the Nazi Party, that the Western Allies would seek Germany as a new ally against the Soviet Union. Donitz's unreal grasp of the situation and tactical blunders as he sought to big himself up as the new leader of Germany actually condemned thousands more to death or the work camps of Siberia. It was a tragic end to an even greater tragedy.

Ian Kershaw's brilliant writing makes this a stunning read. His eye for detail and story mean that it is not an overwhelming book, though it is difficult to read in places. His final answer to the question posed at the beginning is a dialectical one. All the factors that meant individuals might continue to fight, or undermined their desire to surrender combined together in a particular set of circumstances, created by Hitler's ideology and the structures of the Nazi Party. When we say "Never Again!" today, and organise against modern fascists, we do so, on the understanding that those tiny movements today could contain the seeds of future war and holocaust. Kershaw shows the ultimate horror of what happens when they aren't stopped.

Black - IBM and the Holocaust
Sereny - Albert Speer: His Battle with the Truth
Paxton - The Anatomy of Fascism
Boll - And Where Were You, Adam?
Grossman - Life and Fate
Posted by Resolute Reader at 9:31 pm