John Molyneux - Marxism and the Party 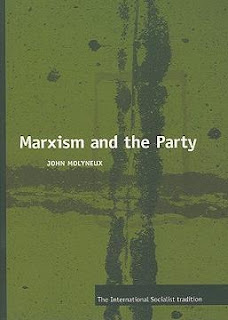 First published in 1978, this book by John Molyneux helped convince a layer of socialists that they needed to be part of a revolutionary party. As I read it, I thought it a shame that I hadn't read it 20 years ago. Not because I didn't join such an organisation, but because the clarity of its arguments would have helped me understand some of the basic ideas of revolutionary politics much earlier.

Molyneux begins by looking at some of the core ideas of Marxism. The way that society is structured into classes, with exploitation at the core of the economic process. He then looks at the way that Marx believed it was possible for the mass of the population, the working class, who create wealth for the bosses, to overthrow the system and build a new one based on need not greed.

However Molyneux points out that Marx also understood there was a gap between the potential for the workers to be a class "in itself" and one "for itself". There were significant barriers to the creation of a revolutionary leadership that could lead from within. Molyneux takes us through a potted history then of attempts to create such revolutonary organisation. Marx himself, together with Engels engaged in a series of political organisations, finally abandoning them when the revolutionary wave of the late 1800s ebbed.

In the revolutionary movements that marked the early 20th century, and in particular the revolutions that followed World War One, there were a number of individuals who contributed to the theories of revolutionary organisation. Chief amongst these, was Lenin and Molyneux devoted substantial space to examining how Lenin's ideas of the party developed and grew. Lenin's early writings, influenced by the political realities of Tsarist Russia meant that he saw the party as being made up of professional revolutionaries. Under the experience ofthe 1905 revolution, Lenin adapted and transformed his views, developing the Bolshevik party into an organisation that was organically linked to the mass of the working class, was led by workers in every area, yet was a democratic, disciplined party.

Molyneux looks at the other visions of party organisation that existed at the time. He examines why the mass socialist parties of the 1800s had become, by the early 20th century, reformist organisations that were no longer capable, or willing to lead revolution. But he also looks at the debates between revolutionaries themselves - in particular Rosa Luxemburgs critique of Lenin. He sees these debats as a fraternal debate between socialists committed to overthrowing capitalisms, and unlike many who call themselves Leninists, he doesn't dismiss out of hand Luxemburgs emphasis on revolutionary spontaneity. Yet he concludes:


"Luxemburg's theory of the party and its relationship to the working class  remains a useful weapon in a labour movement which, throughout the world, has suffered decades of bureaucratic domination by social democracy and Stalinism alike. But ultimately, it is a useful weapon only insofar as it is integrated into the framework of Leninism. As an alternative to Leninism, Luxemburgism must be judged invalid."

Some of the book is dated. As the last quote implies, the work is in part a critique of the "official" Communist Parties that claimed to carry Lenin's banner into the 1960s and 1970s. These Molyneux shows have little to do with genuine revolutionary organisation, pandering to reformism in many parts of the globe. Today the bulk of those parties have vanished into obscurity, and the sharpness of the debate with them is less needed, though readers will find the critiques of interest as new organisations and ideas are thrown up by mass movements today. Others, particularly those used to seeing Gramsci's name in association with debates around ideology in society may find the chapter on Gramsci's contribution to revolutionary organisation interesting. I would also suggest that it is read along side Molyneux's more recent book on Marxism and Anarchism.

Despite the dated sections and even in the introduction to the 1986 edition, the author indicates that he would re-write certain sections, this is a short book which has much to offer those of use looking to the new mass movements around the world, in the hope that they can finally bury capitalism.

Molyneux - Anarchism: A Marxist Criticism
Molyneux - Will the Revolution be Televised? A Marxist analysis of the Media
Posted by Resolute Reader at 3:05 pm