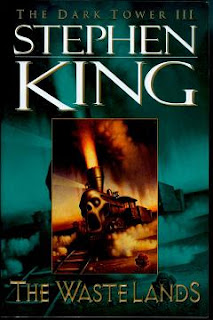 Volume three of Stephen King's series, The Dark Tower, develops the story into a much more concrete and traditional form. I found the two earlier novels slightly esoteric. They were readable, but seemed a little indistinct. The Waste Lands brings together some of the earlier loose-ends and seems to be taking the series onwards quite well.

The hero of the books, Roland, the Last Gunslinger is now permanently joined by two companions who we met in the previous book. All the characters exhibit imperfections, though Roland represents less the fallen individual, but the last of a noble race, who has watched, perhaps for centuries, his world decline. This fallen world is the real star of the story. A once powerful technologically advanced society has collapsed. Cities are ruins, population collapse has left a few small groups of people, who have lost the art of repairing their old technologies. In places these have reverted to almost medieval societies. Elsewhere groups of violent thugs scavenge the surrounding country like something from Mad Max III.

Roland's quest for answers takes him and his companions onwards. As they travel we learn more about the world around them, and our heroes themselves. But as I said, the world is the real centrepiece of the story. It appears to have some sort of relationship to our own, a crashed aeroplane is marked by insignia that we would recognise for instance. What keeps the story ticking over, like a lot of King's writing, is the desire for an explanation of what is going on. Where are they? What is the Dark Tower? What are the links with Earth? Knowing King, no definitive answers will be forthcoming even after all the sequels have been read. But the beauty of King's writing is that the reader probably won't mind. The point IS the journey.

The Waste Lands ends mid flow. It is much faster paced than the earlier stories, though I found it more readable and enjoyable. The urge to read the sequel as soon as possible has not left me yet.

King - The Gunslinger
King - The Drawing of the Three
King - Wizard and Glass
Posted by Resolute Reader at 4:01 pm

This is unrelated to King, but today I found out that an author who you recommended to me, Tom Holland, has a new book out called "The Forge of Christendom: the End of Days and the Epic Rise of the West".

A fellow history reader has done a lengthy review here, if you are interested:
http://armariummagnus.blogspot.com/2011/11/forge-of-christendom-end-of-days-and.html