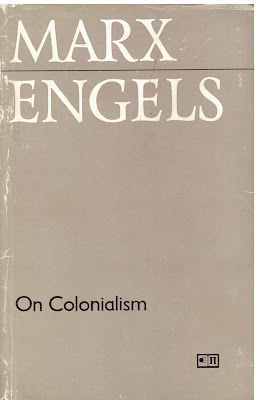 Reading about and around the Indian Rebellion of 1857 recently I picked up an old, unread, volume on my shelf - a collection of Karl Marx and Friedrich Engels' writings On Colonialism. I was drawn to their writings because I wanted to look at two things. Firstly the work of Marx and Engels has been neglected during the reawakened debates around colonialism and imperialism. The Black Lives Matter movement has sparked a renewed interest in understanding how our modern world (and the racism within in it) came about. But the work of these two great revolutionaries has rarely been discussed in this context recently. Secondly I waned to see what Marx and Engels made of contemporary events. They were, after all, writing at a time when the British Empire was at its height.

The book is a collection of varied pieces written by Marx and Engels that touch on colonialism. Many of the articles are those written by Marx (and occasionally Engels) for the New York Tribune. These include analysis of contemporary events (such as the progress of the Indian Rebellion) or discussions of British parliamentary debates around countries like China and India. India dominates these reports. Partly this reflects the importance of that country to the British economy. It also, no doubt, reflects the interest in Marx's readership on these questions - what happened in India and what Britain was doing had ramifications for the global economy after all.

The rest of the articles are snippets from letters, essays and chunks from Capital. Piecing these together one gets a real appreciation of two aspects of Marx and Engels work and ideas. Firstly their absolute horror at what colonialism did to the people of Ireland, India, China and elsewhere. Their anger at violence, poverty, the stripping of natural resources and the destruction of people and communities runs through these works that span their lifetimes. Secondly the reader quickly sees how Marx and Engels saw colonialism as a direct consequence of the nature of capitalism - where capital reshaped the world in its own image. Take some brief comments on India by Marx from 1853:

England had broken down the entire framework of Indian society, without any symptoms of reconstitution yet appearing. This loss of his old world, with no gain of a new one, imparts a particular kind of melancholy to the present misery of the Hindu, and separate Hindustan, ruled by Britain, from all its ancient traditions and from the whole of its past history... Now the British in East India accepted from the predecessors the departments of finance and war, but they have neglected entirely that of public works... it was the British intruder who broke up the Indian hand-loom and destroyed the spinning-wheel. England began with driving the Indian cottons from the European market; it then introduced twist into Hindustan and in the end inundated the very mother country of cotton with cottons.

As Kevin Anderson has shown, Marx demonstrated through his life an evolving understanding of what colonialism was and what non-Western societies were like. In some of the early writings here, Marx sees the impact of colonialism as horribly destructive as well as helping to push the development of India forward. In the same article just quoted he writes about the village organisation in India:

These small stereotype forms of social organism have been to the greater part dissolved, and are disappearing, not so much through the brutal interference of the British tax-gatherer and the British soldier, as to the working of English steam and English free trade. Those family-communities were based on domestic industry, in that peculiar combination of hand-weaving, hands-spinning and hand-tilling agriculture which gave them self-supporting power. English interference having placed the spinner in Lancashire and the weaver in Bengal, or sweeping away both Hindu spinner and weaver, dissolved these small semi-barbarian, semi-civilised communities, by blowing up their economical basis, and thus produced the greatest, and to speak the truth, the only social revolution ever heard of in Asia.

He cautions against any vision of the past as being any sort of idyll.

Now, sickening as it must be to human feeling to witness those myriads of industrious patriarchal and inoffensive social organisations disorganised and dissolved into their units, thrown into a sea of woes, and their individual members losing at the same time their ancient form of civilisation, and their hereditary means of subsistence, we must not forget that these idyllic village-communities, inoffensive though they may appear, had always been the solid foundation of Oriental despotism, that they restrained the human mind within the smallest possible compass, making it the unresisting tool of superstition, enslaving it beneath traditional rules, depriving it of all grandeur and historical energies. We must not forget the barbarian egotism which, concentrating on some miserable patch of land, had quietly witnessed the ruin of empires, the perpetration of unspeakable cruelties, the massacre of the population of large towns, with no other consideration bestowed upon them than on natural events, itself the helpless prey of any aggressor who deigned to notice it at all.

Attacking what came before Empire might seem like a celebration of its replacement with British rule. But the same year, writing again in the New York Tribune he shows that he certainly doesn't see colonialism or Empire as a civilising force.

All the English bourgeoisie may be forced to do will neither emancipate nor materially mend the social condition of the mass of the people, depending not only on the development of the productive powers, but on their appropriation by the people. But what they will not fail to do is to lay down the material premises for both. Has the bourgeoisie ever done more? Has it ever effected a progress without dragging individuals and people through blood and dirt, through misery and degradation?

The Indians will not reap the fruits of the new elements of society scattered among them by the British bourgeoisie, till in Great Britain itself the now ruling classes shall have been supplanted by the industrial proletariat, or till the Hindus themselves shall have grown strong enough to throw off the English yoke altogether

Marx's clarity on the way that capitalism transformed colonial nations into its own image shines through these writings. As does his (and Engels) disgust at what colonial rule meant. In the writings on the "Mutiny" and the suppression of the 1857 revolt both authors express their outrage and rail against the contradictions of the media which downplayed the atrocities of the British and exaggerated those of the enemy: "Actual accounts of Delhi evince the imagination of an English parson to be capable of breeding greater horrors than even the wild fancy of a Hindu mutineer."

In August 1857, in the midst of the suppression of the rebellion, Marx did not duck any critique of the responsibility of the British for the outbreak of the rebellion. In an article on the Investigation of Tortures in India, Marx concluded:

We have here given but a brief and mildly-coloured chapter from the real history of British rule in India. In view of such facts, dispassionate and thoughtful men may perhaps be led to ask whether a people are not justified in attempting to expel the foreign conquerors who have so abused their subjects. And if the English could do these things in cold blood, is it surprising that the insurgent Hindus should be guilty, in the fury of revolt and conflict, of the crimes and cruelties alleged against them?

The bulk of the writing here is by Marx. Engels articles tend to focus on the military aspects. In these he sometimes displays a very patronising attitude. He dismisses India military preparations for battle as showing "an ignorance of military engineering which no private sapper in any civilised army could be capable of". This contrasts with contemporary accounts which showed British forces often being surprised by the brilliance of the rebel military. While perhaps not being a good sample of writing from Engels, I think Marx displayed much more sympathetic understanding of the nature of India society, though both authors are certainly occasionally guilty of seeing India as backward before the arrival of Europeans - for all their hatred and disgust at what colonialism did.

Because of my own focused reading on India recently I've dwelt on what Engels and Marx wrote about India in this volume. However there is a great deal more - writings by both authors on Ireland, Algeria, Afghanistan and China. Critiquing British imperial policy in China they both rage at the hypocrisy of the British government which claims to be civilising and advanced, yet imposed war and opium on the Chinese people in the interests of profit. As Marx, writing to Engels in 1869 said, John Bull should be put "in the pillory!" Here Marx was commenting on a book that Engels was planning on Ireland. Sadly that never appeared, but Marx himself commented in 1867 how his own views on Ireland had changed, "Previously I thought Ireland's separation from Britain impossible. Now I think it inevitable."

As Priyamvada Gopal has noted Marx and Engels, like other radicals and revolutionaries in Britain, had their ideas shaped through an engagement with the rebels and rebellions that emerged against British rule. The experience of Empire and resistance to it transformed their ideas and their expectations. It also helped make both of them place anti-colonial politics at the heart of their revolutionary politics.

This collection of essays is thus a very useful insight into the development of Marx and Engels ideas. It also serves as a way of understanding how those ideas developed. Its fascinating to see how both authors engaged with contemporary events, predicting, analysing and engaging. For activists trying to get to grips with the legacy of colonialism this ought to be part of the reading list.

Anderson - Marx at the Margins
Gopal - Insurgent Empire
William Dalrymple - The Anarchy
Hibbert - The Great Mutiny: India 1857
Marx & Engels - The German Ideology
Marx - Value, Price and Profit
Marx - The Civil War in France
Engels - The Origin of the Family, Private Property and the State
Marx and Engels on the Population Bomb

Posted by Resolute Reader at 9:19 pm

I'd be curious to know if they also had anything to say on how the British colonial experience influenced and still influences what is happening in the US, Canada and Australia. Our govts, political structures and assumptions all stem from the same original source.