Greg Grandin - The End of the Myth 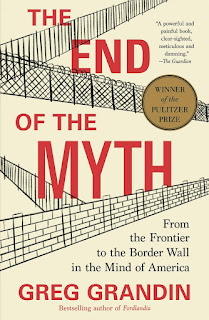 In the 1860s the American historian Frederick Jackson Turner advanced the theory that American society was shaped by the existence of a constantly moving Frontier. Turner's thesis argued that this Frontier gave rise to a particular type of individualism and democracy in the US.

[Turner] said what was good in America was made in America, by settlers transforming frontier wilderness: "Free land," he wrote, and "an abundance of natural resources open to a fit people, made the democratic type of society in America." America's unique democratic individualism, Turner held was a "new product that is American." American democracy "came out of the American forest and it gained strength each time it touched a new frontier.

Turner's thesis has proved attractive to generations of thinkers, politicians and historians since. It's one that is however hard to pin down. What does it actually mean? Greg Grandin points out that Turner came up with at least thirteen different ways of explaining this "elastic" concept. In one sense it could mean anything to anyone, but in a more profound one it was labelling a fluid concept in itself - how America saw itself. As Grandin explains:

The frontier... was a state of mind, a cultural zone, a sociological term of comparison, a type of society, an adjective, a noun, a national myth, a disciplining mechanism, an abstraction and an aspiration. At the same time though, such explanatory simplicity: "The existence of an area of free land, its continuous recession, and the advance of American settlement westward, explain American development. [Turner's words]"

Grandin's book is first of all an exploration of the Frontier thesis and how it's been used. Much of the work looks at the reality behind Turner's cosy idea. This is one of brutal violence - in particular against the indigeneous people of North America. He documents the wars of extinction the US state led against the Native people but also how the US treated those who didn't fit the narrative. Racist, systematic violence against Mexicans, black people and, of course, slaves was part of the foundation of the American democracy that Turner held dear. Barely twenty years before Turner launched his speech, as revolutionary movements exploded in Europe in 1848:

The US too had crowded cities and hungry workers, fighting efforts to subordinate their lives to mechanical routine. But instead of waging class war upward - on aristocrats and owners - they waged race war outward, on the frontier, 'Prenticeboys didn't head to the barricades to fight the gentry, but rather joined with the gentry to go west and fight Indians and Mexicans. After which, in 1848's November presidential election, they divided their votes between a Democratic Party Indian killer and a Whig Party Indian and Mexican killer.

People of color - enslaved peoples within the US or dispossessed peoples on its border - helped define the line between proper liberty, which justified self-governance, and ungovernable licentiousness, which justified domination. Native Americans especially, in their 'wild freedom' - a refusal to cultivate the earth and a desire instead to roam, hunt and gather - created what many identified as an almost childlike relationship to nature, held up as the opposite of the self-cultivate and self-possession of white people worthy of political self-rule.

Thus the Frontier was really about the expansion of capitalism into new areas. With it came the Native American killers, the farmers, woodsmen and the capitalists. Those that saw the opening up of the West as a way to make money, and to transform the landscape into a part of capitalist production.

Turner's thesis turns out to be a myth. But it's a myth that has "ended" with the throwing up of walls, borders and barriers. US ideologues still like to talk about the frontier, but it's a Frontier elsewhere. In the 1960s it was in SE Asia, Cambodia and Vietnam. In the 2000s it was in Afghanistan and Iraq. Through the Cold War it was a line down through Europe. The Frontier myth followed US Imperialism around, justifying, explaining and usually leading to Black and Asian people being killed.

In fact military conflict has helped enshrine and unite America. In the decades following the US CIvil War it was a new Frontier - a war with Spain that allowed former enemies to Unite again. In doing so, "the 'Lost Cause' of the Confederacy - the preservation of slavery - [was transformed] into humanity's cause for world freedom". Freedom for US capitalism to run rampant.

But in spreading globally US Imperialism after the Second World War became keener to manage those on its borders. The Frontier became a Border. But it was one that remained out of sight and mind, unless needed to fulfil some US politician's need to scapegoat:

For the most part, the borderlands, with all their seething racism and militarised and paramilitarised cruelty, remained apart, a world away from the American heartland. News from the border, no matter how bloody, stayed beyond the nations consciousness as Ronald Reagan once again launched the US beyond the frontier and Bill Clinton made his pitch that no line separated US interests from the world's interests.

So it wasn't Trump that closed off the Frontier and build (or tried to build) a wall. He was just saying out loud what almost every other post-war US President wouldn't. That's not to say that Trump's racism is not virulent and horrific. But its roots lie in a vicious, violent, racist, US past. As Martin Luther King Jnr said, the idea of the Frontier fuelled and reinforced pathologies of racism, violent masculinity and moralism which, in Grandin's words "celebrates the rich and punishes the poor". For King, in the last, but most radical years of his life, the Frontier in Vietnam meant bombs there "exploded at home".

by running against the entire legacy of the postwar order, including those policies that have generated, in the countries south of the border as well as in the Middle East, untold numbers of refugees... endless war, austerity, 'free trade,' unfettered corporate power, and extreme inequality. Two years into his tenure, the war has expanded, the bombing has escalated, and the Pentagon's budget has increased. Taxes have been cut, deregulation accelerated and the executive branch is staffed by ideologues who want to deregulate and even more.

Greg Grandin's book helps us understand how Trump won. And what he has done since then. But more than this it helps explain America. Why can police kill Black people seemingly with immunity? Why is the US economy so dependent on migrants, but so racist towards them? Why is US society so violent? As the frontier moved westward, violence, racism and the myth of rugged, individual heroism followed behind. This was the founding myth of US capitalism - and everyone has suffered since. Greg Grandin's book helps us understand in order to destroy borders and frontiers for good.

Posted by Resolute Reader at 4:33 pm