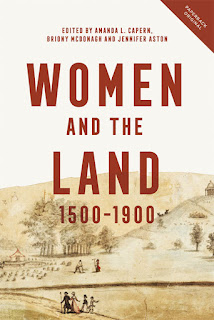 This "explicitly feminist" book brings together a series of essays that look at the complex relationships that women had with property in the Early Modern Period. The book might be described as also being explicitly revisionist because, as the editors explain in their introduction, it was written "to challenge the idea that the existence of patriarchal property relations - including the doctrine of coverture and gendered inheritance practices - meant that property was concentrated almost exclusively in male hands". The editors continue to show that they are telling a "different story" where women owned property, traded it, managed it, and fought to be seen as owners and enjoy the profits from that land. They also transformed the land and shaped it through their own world views.

Emphasising these points, and indeed rescuing from more traditional history the way that female property-relations have been ignored doesn't negate the fact that in the period covered women did not have the same rights as their male counterparts. The laws governing issues like inheritance, property in marriage and so on began to change in the second half of the 19th century. But before then the law was strict, and in today's context appallingly unfair to women. For instance, before the Married Women's Property Acts of 1870, 1882 and 1893, "a married woman was able to write a last will and testament, but as she had no right to own any assets, she could only dispose of her personal belongings and any assets held under settlement". A woman needed her husband's permission to write that will and it could be withdrawn at anytime, even after her death.

This said, the book is a "rebuttal" to the idea that women were not landowners, or only occasionally owned land. Women in the period are often seen as solely being in charge of the family and home, but rather they were "never geographically restricted to a domestic, private sphere". Similarly the idea of a "strict division of work" between men and women did not match reality. As Amanda Flather explains in her chapter on Gender Relations in Early Modern England, "historical scholarship has moved a long way from the assumption that all men were autonomous patriarchs and all women simply victims". In this essay (and others) the various authors explore the different ways that women expressed their own agency.

Most of the chapters focus on "elite" women. These women's relationship with land was very much one of wealth and power. A key chapter by Jessica L. Malay looks at the Lady Anne Clifford who, in the mid 1600s, had a decades long battle to inherit her father's massive northern estates. Clifford was remembered as an intelligent and sympathetic landlord who consciously presented herself as a local ruler. Her wealth and power meant that she was a important figure in English politics, but her "progresses" around the North were orchestrated to demonstrate her position. As Malay explains, "her entourage, made up of local gentlemen, tenants and dignitaries, created a tableau that placed her as the pinnacle of regional authority through which all prosperity flowed." Malay continues:

She utilised patronage to construct a social reality in Westmorland that was dependent upon her and which sustained, deepened and protected her social and political values there, but also radiated throughout England.

But this construction of "social reality" was also physical: "[Clifford] expended tremendous sums of money to reshape the landscape and its socio-political structure to reflect her political idea of a benevolent feudal state."

A second example, if on a smaller scale, is described in Stephen Bending's chapter where he looks at the construction of a garden by Elizabeth Montagu at her country house at Sandleford. Employing the famous designer Capability Brown she constructed an invented landscape, but did so with more than a simple eye on garden layout. Through the expenditure of vast sums, she saw the garden as creating a space for her, her friends and those in her social networks as well as providing a service for the lower classes. Similar to Clifford's benevolent feudal state, in the 1780s Montagu saw the employment of the local poor as a charitable activity while creating (or inventing?) nature. For Montagu the space around her country mansion could not be separated from the role as landowner and local authority.

Perhaps the most shocking chapter is Amanda Capern's account of the abduction Arabella Alleyn. A wealthy heiress who was abducted as a child in the Civil War era and forced into marriage in order that her future husband's family could gain control of her wealth. Alleyn's account is, as Capern explains, unusual in that we an autobiographical account of her life. But cases of abduction like this were relatively commonplace. This is a story of abduction, forced marriage, likely rape and a life of abuse and indignity. It is also an account of resistance as Alleyn fights to retain control of her assets and escape the situation she found herself in. It is a tragic story that illuminates how women were seen as extensions of male property in the period, but also for how it shows that women were not passive victims.

Several of the chapters demonstrate how archival material can show us much more about the world that produced them if they are viewed through a different prism. Even dull accounting books, wills and legal papers can show how women controlled wealth, land and companies and played a key role in a world that was supposed to be solely a male domain. Briony McDonagh's chapter shows how "elite women's book keeping" was a way for some women to demonstrate their own agency. Of course sexism was never far away. Women were seen as less financially literate, so more likely to be at risk of swindling. and McDonagh documents several cases of estate managers losing their jobs for trying to get one over the account books. The use of legal documents was also a way that women could manage and control their wealth, even while married. Jennifer Aston searches through probate documents to show that women were not simply "caretakers" of other's wealth.

The women were not only actively creating their estates through property purchase, business ownership and the creation of family heirlooms such as hairwork mourning jewellery but were also architects of intergenerational wealth strategies designed to protect their wide-ranging assets, providing for their beneficiaries and strengthening familial and friendship networks for another generation.

Most of the essays here deal in detail with property and landowners. As such they tend to be of the upper and upper-middle class sections of society. For them property/land is about power, wealth and often governing the behaviour of others through employment etc. So the book focuses on the wealthy with less discussion of the lower orders. This was a disappointment because despite the emphasis on land as property, there are interesting discussions to be had abut the role of women in movements that sought to exert control over land (and the produce of land) in the context of enclosure and the destruction of the commons.

That said, this is a book consciously written to show that women were not passive adjuncts of men for the last 500 years. Through their relationship to land and property they were shaping the landscape and creating the physical and political terrain that we know today. Today there are new battles against women's oppression, new struggles for land rights and against inequality. Land too is still owned and controlled by a minority of extremely wealthy, and usually male, people.

While the book is aimed at academics and its chapters can seem very niche, non-academics will find material here that is very useful and illuminating. I very much agree with Amy Louise Erickson who, in her afterword concludes, "the first step towards change is recognising what has not changed for the last five hundred years in women's relationship to land".  She rightly argues that this book is an key tool to help us do that.

Posted by Resolute Reader at 7:13 pm