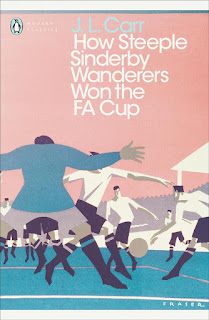 This is possibly the funniest novel from the 1970s that you have never heard of. Steeple Sinderby is a tiny village, a "tiny grey-walled settlement, forgotten in the western wolds". It is populated by exactly the sort of people you imagine populate tiny forgotten villages and its amateur football team won the FA Cup. Or at least they won a slightly alternative FA Cup where Scottish teams participate and in which Manchester United might be persuaded to play in an uneven, uphill field in the middle of nowhere for the semi-final ("we make it an all-ticket game... but...  decided that it would be immoral to raise the charge for admission from the 5p with which we'd begun the season").

Sinderby Wanderers are doubly lucky. There is at least two former first division player in their village and the local school headmaster is a exiled Hungarian genius whose fresh eyes on football allow him to devise fiendish strategies to defeat all the higher placed players. From the polygamous landowner who chairs the football board simply because he chairs everything else in the village, to the vicar who plays on the wing (except when there's a funeral to organise) these beautifully drawn, hilarious, characters give an odd sense of realism to the unlikely tale. There are spectator brawls, improbably goals, and a hilarious TV interview with the chairman who channels Enoch Powell in his vision for Britain, nearly bringing down the government.

The book is not the official history of Wanderers' victory. Rather its the private memoirs of Joe Gidner who usually takes the ticket money from the derisory number of fans who normally watch Wanderers play, and makes a living writing poems for greeting cards. Told through flashback, newspaper reports and committee minutes, this is an absolutely hilarious and deeply poignant story.

JL Carr was himself delightfully eccentric. His most famous book is probably A Month in the Country. Readers of that beautiful and sad novel will be unprepared for the humour of this one. I'd recommend both if only to see the true genius of this forgotten writer. Perhaps the funniest book I've ever read, this is certainly in the top ten. Buy it as soon as you've finished reading this review, you don't even need to like football.

Carr - A Month in the Country
Posted by Resolute Reader at 4:22 pm