Helen Rappaport - Caught in the Revolution 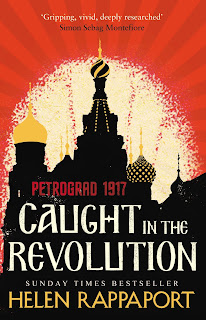 The Russian revolutionary year of 1917 was a world historical event that has been the subject of countless books at articles. Some of the most important works have been those that focus on the revolutionary process, bringing to life the events that took place and the role of ordinary people; workers, peasants and soldiers in making the revolution. Chief among these for those of us on the left are Leon Trotsky's History of the Russian Revolution and US socialist journalist John Reed's eyewitness reportage Ten Days that Shook the World.

Less well know however are the countless reports, books and memoirs made by another group of eyewitnesses in Petrograd - the foreign communities that were there, often as part of Western diplomatic missions or representatives of foreign business interests. Some of these left detailed accounts, photographic records and even films of 1917 and many of them form the basis for Helen Rappaport's book written for the centenary year.

As a result much of the eyewitness accounts in this book will be completely new to those of us who have read lots of books about the Russian Revolution. Unfortunately those who know little about 1917 or pick up this in the hope of learning about this important event will be given a distorted view of the Revolution, mainly written by those who did much to try and stop it proceeding.

The book is at it's best when it gives a sense of the mass involvement in the Revolution. The first chapters deal with the outbreak in February, with numerous individuals swept up in the mass protests and demonstrations as strikes exploded in factories across Petrograd. The accounts of these demonstrations, pouring through the city streets, dragging these watchers with them and then confronting the state's forces - principally the Cossacks - are breathtaking to read. They give a real sense of the spontaneity, the confidence of the protesters, and the speed with which the old order was brought to its knees. The collapse of the old order is fascinating to watch through the eyes of Rappaport's commentators, not least because the majority of them are individuals who had, a few week's earlier, been enthralled to be invited to the Tsar's balls and lavish parties.

Here in lies the problem. Rappaport's eyewitnesses are precisely the class that feared genuine revolution. Most are pleased by the prospect of a "democratic" transition in Russia, but they, are universally keen to ensure that the new Russia maintains its old commitments - principally it's involvement in World War One. They fear the radicalisation of the Revolution precisely because they fear it will pull Russia out of the War and challenge their wealth and privilege.

This is very noticeable when it comes to the reports of General Kornilov's attempted coup against Kerensky. The diplomats, their wives, friends and acquaintances all want Kornilov to succeed, precisely because he will put an end to the Bolsheviks. As Florence Harper, a Canadian journalist in Petrograd wrote after Kornilov's defeat, "I was filled with blind rage. We all knew it was the last chance., The Bolsheviki were armed; the Red Guard was formed. The split was definite; Kerensky was doomed."

The problem is that Rappaport share's these prejudices. She begins by arguing that the October Revolution was a coup, and repeatedly portrays the Bolsheviks as a bloodthirsty minority who somehow trip the mass of the population into following them. Of course, given their politics and class position, those who she relies on for eyewitness accounts, tend to highlight the bloodshed, violence and killing that takes place. But rarely do they (or Rappaport) mention the poverty and hunger that drives the Revolution. Violence is solely blamed on bloodthirsty revolutionaries, and never on the oppressed who are sick to death of being exploited and treated like dirt. Given the reality of Russian society prior to 1917 it's no surprise that so many policemen were killed - but its mostly blamed on blood-lust.

Throughout 1917 Russia's continued involvement in the War helped radicalise the revolution. But rather than seeing this as a result of a country sick to death of death and suffering at the front, and privation at home, Rappaport blames this on the agitation of Lenin and the Bolsheviks.

Sadly, and this again is a consequence of her chosen source material, what is almost completely missing from this account is a sense of what the masses were doing, saying and thinking. Did none of the journalists Rappaport quote join in a meeting of the soldiers or workers? The only mass conference discussed here is one organised by Kerensky, which most of the eyewitnesses thought was dull - but why would it be anything else given it was mostly pompous establishment figures denouncing the revolutionaries. On occasion we get a glimpse of what ordinary people wanted (such as two servant girls demanding two hours off every day so they can go to the cinema). But all too frequently the eyewitnesses denounce these individuals, or the masses in general as ill-educated fools who know and understand little about events around them. The book cried out for the authentic voice of the working class Russian - not just descriptions of mass protests, but the sense of what was happening in the workplaces and barracks. Readers will have to look elsewhere for that.

Sadly this book is ruined by the anti-Bolshevik outlook of its author and the eyewitnesses she quotes. While there are occasional glimpses of wider political events, the book fails to give a real sense of the Revolution as being made by ordinary people. As such we lose the essence of the Revolution and the book becomes little more than another attack on 1917, such as those written by many of Helen Rappaport's eyewitnesses when they returned to their privileged lives back home.