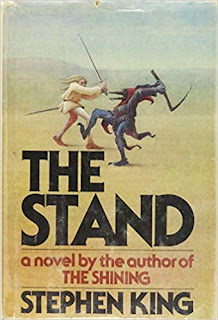 Today it seems that post-apocalyptic novels are ten a penny. The combination of Trump's Presidency, Brexit and the climate catastrophe have driven all sorts of authors to write about the end of civilisation. Few of those get to grips, in my opinion, with the likely reality - which is likely to involve global war for diminishing resources, rather than the Swiss Family Robinson fantasy of isolated groups living in the midst of plenty as they rebuild civilisation.

I first read The Stand in the early 1990s and had little recollection of it other than it involved a clash between good and evil in a post-apocalyptic American wasteland. Re-reading it I was pleasantly surprised to discover an epic which cleverly challenges some of the stereotypical "end of the world" stories. Despite being written in the 1970s the book itself felt remarkably fresh and sadly relevant.

The story begins with an accidentally release of an experimental biological weapon "Captain Trips" which rapidly spreads across the states. The original version of The Stand was shortened by several hundred pages and the complete book released a few years later, has much more on how this happened and the way that the military attempt to keep control. These extracts help make the book feel much more gritty, and relevant, as the US state desperately attempts to hang on to power. The collapse of the chain of command as almost 9/10 of the population succumbs to Captain Trips means that those remaining soldiers descend into horrific barbarism.

Small groups of survivors share dreams that pull them in two different directions, setting up the Good v Evil climax to the books. One group are pulled towards an elderly black woman, Mother Abigail, a deeply religious person who becomes the focus for new, democratic society around Boulder Colorado. The others are pulled towards a recurring evil figure from King's canon, Randall Flagg, who runs a type of fascist society that rapidly sets about putting civilisation back together - the sort of society where the trains run on time, but those who dissent are crucified from telegraph poles.

The upturning of the genre occurs when Mother Abigail realises that her purpose in bringing the good together was not to rebuild civilisation in a new, democratic and fraternal way, but to destroy Flagg and his creation. It's leads to a magnificent about turn in the story, as key figures realise their destiny is not to live life in a new society, but to travel across the desert and engage in a confrontation that will decide humanity's future.

It being Stephen King, the delight of the book is in the detail. The individual stories of those who survive the pandemic are told with wit, sympathy and horror. In fact one of the reasons I class King as such an excellent writer is his ability to expose the dirty underbelly of US society through the medium of horror. Racism, poverty, unemployment and misogyny are the backdrop to the tales of pandemic. This is not a pleasant white middle class society, set in picket-fenced suburbia, brought to its knees.

Instead it's America, warts and all, that collapse and that makes the anguish of the survivors, who wonder whether anything has been learnt from it all so important. King doesn't think so - the circle opens and closes, history repeats, it's all inevitably going to go wrong - but that doesn't diminish the story itself. The characters too are far from one-dimensional. They agonise over choices, change allegiances and do the unexpected - though not always for the right reasons. It makes for a remarkably satisfying reading experience.

One other influence I noticed was ecological. King shows many animals - particularly dogs - dying as a result of Captain Trips and his characters worry about the population explosion of pests like rats. King is clearly influenced here by George R. Stewart's classic (if far less brutal) end of the world novel Earth Abides. But I wondered whether Rachel Carson's Silent Spring was also an influence. His characters, looking for drinking water, note that the factories haven't been shut down long-enough for the rivers to be safe, and one buries his rubbish rather than throwing it on the road - "not going down that route again" seems to be the message.

Like his other classic IT, The Stand will be all too frequently dismissed because of its genre. But both works deserve reading for the light they shine on our troubled times and for the epic story-telling.

King - Under the Dome
King - The Gunslinger
King - The Drawing of the Three
King - Wizard and Glass
King - The Wastelands
King - Wolves of the Calla
King - The Wind Through the Keyhole
King - The Dark Tower
Posted by Resolute Reader at 2:44 pm

As a King fan & an even bigger fan of The Stand, I heartily agree! Most of his books get a little self-indulgent at some point...and there were parts of The Stand that could have been edited...heavily, but there's no denying King's ability to create a world and a story that has you enthralled.
Just like the Gunslinger series. I loved the first 3-4 so much, I gave them repeat reads during my 20's and 30's as I waited for him to eventually finish the series.