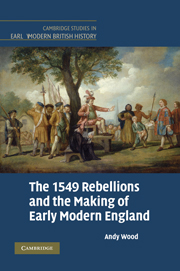 Despite the somewhat academic title, this is an exceptional study of the 1549 rebellions, their causes and consequences. Andy Wood's account puts class at the heart of the discussion of the rebellions, something that is often missing from more popular accounts. This allows him to give a real sense of a period of history going through enormous changes, while different groups in society struggle for their own interests and identity.

Firstly Wood argues that this is a time of growing class confrontation, as economic, political and social changes come together. He points out that traditionally popular rebellions like that of 1549 have been seen as about restoring or protecting the existing social order. It is clear that there is some element too this - the Western Rebellion was explicitly centred on opposition to changes in the established church, while the rebels in Norfolk and elsewhere frequently began by over-turning enclosures of common land. But Wood also argues that the 1549 rebels often demanded a new order in society


The Norfolk rebels of 1549 demanded a polity based upon a combination of monarchic lordship and popular sovereignty in which small communities formed autonomous entities, linked to the sate in a dispersed network... Moreover, the 1549 rebels sought to exclude the clergy from the economic life of the village. [3]

So simultaneously the rebels were looking backward to a more ordered society and fighting for a new society based on a more just setup. This is not surprising, there was growing injustice, as the changing world was demanding more from the commons. Wood points out that the religious changes, the Reformation was interpreted "in terms of the greedy, avaricious and corrupt gentry, back by the Crown." This was a time, Wood argues, when labouring people "frequented articulated" anxieties relating to their futures, or their families future and saw the Reformation in "material terms".

A central part of Wood's book is the role of memory, and in particular the memory of past rebellion. Rebellion was celebrated and the stories passed down, but they also gave a reference point to other rebellions. We are reminded of the parallels of some 15th century rebellions which deliberately chose the same sites to assemble as those of the 1381 uprising.

But as Wood points out, 1549 takes place at a slightly different juncture, the intersection between the older medieval world and the early modern period when capitalist relations was just beginning to change the nature of parts of the English countryside. Central to this was Norfolk, and the town of Norwich which played a central part in Kett's rebellion was key to this. Wood uses Marx's insights into historical change to argue that 1549 was "as dispute between lord and tenant over relations of production and modes of exploitation".

Sections of the ruling class in the mid 16th century certainly understood what was at stake, Sir William Paget's famous letter to the Duke of Somerset, makes this clear


How say for the law where is it used in England at liberty? Almost nowhere. The foot taketh upon him the part of the head, and commyns is become a king; a king appointing conditions and laws to the governors, saying, Grant this and that and we wil go home.

Wood makes it clear that the scale of this rebellion was much larger than traditional accounts have it. The two epicentres of revolt in Norfolk and the South-West are simply the best known of the rebellions of the time. Events in Norfolk in particular, according to Wood, are known to us because the ruling class there specifically recorded and marked them in contemporary accounts. Alexander Neville's account of the rising, upon which all histories of 1549 in Norfolk base themselves, was widely used to offer an alternative narrative to what took place. Bishops read it allowed to congregations, hoping that this would supersede popular memories of events. The popularity of Neville's account obscured events elsewhere and simplified the story. Instead of a countrywide rebellion reflecting mass discontent, the rebellion could be dismissed as a few localised events inspired by individual hot-heads and criminals.

But 1549 was the last of the great rebellions. Wood argues persuasively, that the economic changes taking place, which had in part inspired the rebellion, were undermining the relations in rural communities that gave the uprisings their character.


As the sixteenth century drew to its close, social changes in agrarian regions increasingly divided rich from poor. The consequence of this was to fracture the social alliance upon which the tradition of late medieval popular rebellion had rested. Wealthier villagers had increasingly little in common with the social complaints of their poorer neighbours; indeed, in some communities, they became the target of popular opprobrium. [203]

By the 1580s and the 1590s, Wood argues, it was rich men and farmers who had become the enemies of the poor. I'm less convinced of this particular analysis, which to me seems to suggest that before 1549 there hadn't been any antagonism to the wealthier people in the towns. What is taking place is a transformation of the nature of wealth and power in villages. These were no longer simply wealthier peasants, but a completely different class of people. Wood understands this too:


Driven by a combination of social anxiety and economic opportunity, the 'better sort of people' now stood for a very different est of principles from the 'honest men' who, between 1381 and 1549, had formed the public leadership of popular insurrection. [207]

100 years later this new class would itself dynamite a national rebellion and as such 1549 was the end of a particular era of rebellion, but it wasn't the end of revolt. In some senses, it was just the beginning.