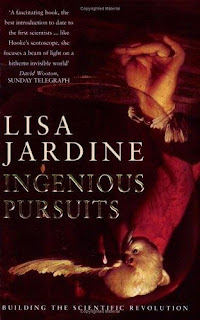 Having really enjoyed Neal Stephenson's book Quicksilver recently, a novel set during the late 1600s which frequently focuses on some of the lives of members of the Royal Society, I decided to learn more about these early scientists - men like Robert Hooke, Robert Boyle and Isaac Newton. Lisa Jardine's book on the Scientific Revolution seemed to be a good place to start.

Jardine begins with the scientific advances being made in the early 1600s in the fields of astronomy. Much of these were triggered by new technology in the fields of optics and time keeping. People gazing at the heavens, such as the first Astronomer Royal, John Flamsteed could now precisely measure the position of stars as well as observe the skies in improved detail. The work that Renaissance thinkers like Galileo had done was built on and expanded. Much of the needs of this were driven by wider interests. The measurement of the heavens was important not simply for pure science, but because it added navigation, and as the world was being opened up to Europeans by traders, explorers and the military, accurate navigation was very important.

Jardine's book is well written and readable. She deals well with the debates and disputes that took place between scientists at the time. The arguments that took place in late 1680 and 1681 for instance as leading figures like Isaac Newton and Flamsteed tried to understand the comets that had been seen in November and January are covered well. Whether they were the same comet or different had enormous ramifications for the understanding of the solar system and Jardine explains this well. She also captures the frustrations of these new experimenters well, as they competed for funds or tried to get new ideas published before the others to secure their patents and scientific notability. Though Jardine's main thesis is that these new scientific minds were less concerned with day to day politics and more with seeking scientific truth. On a number of occasions scientists continued to communicate despite their respective countries being at war. One reason why the Royal Societies secretary, Henry Oldenburg was briefly imprisoned by the King.

The book is neatly parcelled up into different sections which often centre on a particular scientific theme - astronomy, map making, anatomy and clockwork for instance. While this makes the book readable and self-contained it highlights wider problems with Jardine's work. Not the least of this is an annoying level of repetition - several of the anecdotes she tells are repeated and we are introduced to key figures on more than one occasion. Were the book longer this might be necessary, but in this case it really is not needed.

Much of the book is made up of illustrations, though many of the black and white images are replicated in colour in the centre of the book. Oddly some of these are on facing pages, which is a strange layout. Omitting the duplication would have shortened the book considerably.

However this is a minor irritation. More problematic is Jardine's approach to the period. The late 1600s were a period of immense scientific development in western Europe. Jardine seems to make no real attempt to locate these changes in the context of a enormously changing world. Following the Dutch revolt and the English Revolution, new commerical interests were opening up the world. Slavery was beginning on a mass scale and global trade was rocketing. Inside England, new industrial processes were taking root as the economic and political situation was freeing up the ability of the rich to make more money from capitalistic methods.

Throughout human history, there have been geniuses like Leonardo de Vinci, Galileo or Newton. But Jardine doesn't get to the heart of why in the period being discussed they seemed to blossom in great numbers. It wasn't simply that people were suddenly more interested in the world, it was that the world had changed and was demanding to be understood. The financial incentives to understand for commerical, or military gain were also encouraged by a new layer of the wealthy who had the time to collect, study and experiment.

Sadly this lack of clarity over wider questions is hampered by other problems. On occasion Jardine is warrant to make somewhat glib generalisations. On one she writes that "Even during the period of Newton's presidency [of the Royal Society]... the physics, astronomy and mathematics we associate with the birth of modern science today was a minor, specialist interest". Given that Jardine has spent several large sections of the book discussing the importance that various figures in the Royal Society gave to these subjects as well as pointing out their importance to navigation and the longitude problem this seems an odd claim.

In addition to these generalisations I was disappointed by a number of other observations. For instance, Jardine writes that Jacob Bernoulli was the discoverer of the "isochrone, the curve along which a body with uniform vertical velocity will fall."

Bernoulli did not "discover" the isochrone. He was the first to solve the problem using calculus. Huygens did it geometrically 40 years beforehand. In addition her description of the isochrone is inaccurate. The isochrone is actually the curve for which an object moving without friction will reach the lowest point in the same time, independent of its starting position.

Sadly Jardine's focus on the individuals rather than the wider picture, obscures the real processes taking place in science during the 17th and 18th centuries. Later, while discussing the discovery of the structure of DNA in her epilogue, she writes that:

"What must strike us... is how similar the tales are that Hooke and Watson tell: tales of casual encounters in coffee houses, overheard remarks and data encountered fortuitously... brash remarks, rash promises of success, mistakes hastily withdrawn..."

Johnson - The Ten Most Beautiful Experiments
Posted by Resolute Reader at 10:39 am

This focus on the individual scientist is a standard problem in describing the history of science and the development of new ways of seeing the world. It's a standard writing school technique to focus on people so that readers will get engaged. But I think readers are more intelligent than that. We need to see the bigger picture and how individual discoveries (and the forgetting of some discoveries) contribute to the adoption of a particular world view. Very few authors are able to do this. Nonetheless I will probably read this as the period interests me.

Good review. I had similar issues with the repetition, which I found quite annoying, and while it's already a fat book a bit more on the social and wider contexts wouldn't have gone amiss.

It's interesting, and if acorn reads it I don't think they'll regret doing so, but the flaws you identify are very much present.