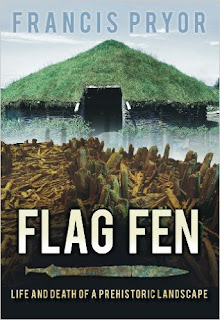 I read Flag Fen: Life and Death of a Prehistoric Landscape in preparation for a long-awaited trip to visit Flag Fen itself. I should say at the start that I thoroughly recommend a visit to this extraordinary site, which brings to life the bronze age remains hidden beneath this part of the countryside and displays the incredible finds well. It is an excellent afternoon out and the recreation of bronze age droveways (for instance) are worth visiting both for the insights into historic farming and for the wildlife attracted to the hedges, fields and areas around the lake.

Flag Fen is an excellent introduction to the site. Much of it is an extensive re-write of Francis Pryor's earlier guides to the site and contains updates, additional material and corrections. The introductory chapters are a useful guide to the development of the unique fens of this part of England which help the reader understand both how the Flag Fen archaeological remains survived and the landscape which you travel through to visit the site. Pryor is also at pains to point out that climate change will almost certainly lead to this part of the world being drowned before the century is out. Visit the site while you have time and try to do something about climate inaction in the meantime would be my conclusion!

For the non-specialist reader, the most fascinating parts of the book will be the discussion of the archaeological process that began with Pryor stumbling over a piece of worked bronze age wood in a muddy ditch and ended with the extensive site we see today at Flag Fen. Its difficult for us to understand what has been uncovered - for most people archaeological remains are things that are recognisable to us from our own experience, so Pryor is at pains to point out that we cannot always view the past life this, writing about the Iron Age at Flag Fen, but its applicable to the earlier period, he notes,


we must beware of assuming that they must always have acted like us, only more ancient. 2,500 years is a very long time indeed, and I suspect we would find life in the Iron Age far stranger than just living in a round-house and eating off coarse pottery. I am convinced we would find that their whole system of beliefs, standards and values was based on a view of history that was entirely alien to us.

This is an important point. It is no surprise that when archaeologists first looked at the sodden timbers buried at Flag Fen they assumed they had found a house, or something similar. Instead the remains are now understood as a massive long causeway of over 60,000 timbers, and a gigantic platform which sat above the surrounded marsh. Around these two enormous wooden structures were scattered the votive offerings of bronze and iron-age people - bent and broken swords, pins, knives and the occasional animal and human skeleton. The book, it should be said, is well illustrated with pictures to explain this, including the incredible shears (and their case) found at the site.

As I said, the book is chiefly an account of the finds made at the site and thus must be read in that context. As with all of his popular writing, Pryor is readable and clear. Occasionally, as elsewhere, I found his still a little over-bearing, but in this case he probably has an excuse - after-all he has been chiefly responsible for making sure that Flag Fen was turned into the important historical site it is now.

Sadly the book finishes on a downer. The Fens are continually being drained and buildings encroach. While climate change alters sea-levels, the drying Fens will also lead to the destruction of other, hidden remains. Pryor suggests that within 30 years it will all be gone even if future archaeologists get the funding to dig in this area.

Unlike other books by Francis Pryor this is probably not one that most people will read without visiting Flag Fen itself. His other books (see below) are likely to be more useful for the casual reader that this highly specific work.

Email ThisBlogThis!Share to TwitterShare to FacebookShare to Pinterest
Labels: archaeology