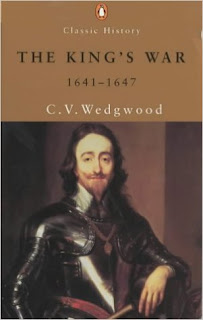 In his 1958 review of C.V. Wedgwood's The King's War, Christopher Hill noted that

No historian before Miss Wedgwood has attempted to retell the story with a comparable wealth of detail. She draws most skilfully and with admirable catholicity of interest on a mass of sources, old and new, published and unpublished, English, Scottish and Irish.


But Miss Wedgwood's book as a whole is a narrative, not an explanation. It tells us all about the war except what they fought each other for.

Hill was absolutely right to point to Wedgwood's wealth of resources and detail. This is a lively and extremely detailed account of the Civil War. Her writing is readable and in places extremely entertaining. Despite her own Tory politics the author manages to be reasonably balanced in her account and displays an admirable understand of some of the forces at play beneath the surface.

But this is by and large a history of the big picture. Unsurprisingly, given that this is volume two of her three volumes of biography about Charles I, this mostly examines the Civil War from the point of view of the King. That said, the Charles I here is very much a prevaricating figure, prone to listening to his current favourite and ignoring advice from his skilled military leaders and those who had fallen out of temporary favoritism. In fact, at times, Charles recedes into the background precisely because his importance lies solely in because he is king. He is not a good leader, he frequently lacks clarity of ideas, tact and even the ability to express his point of view. As the military tide turns Charles scrambles around for new alliances, believing that his god given position as king will save him, and failing to understand that he is under threat because the world has moved on, and there are now bigger forces at play.

Indeed, as Hill noted, Wedgwood was able to display an admirable grasp of the way that the world was changing and the threat this meant for those of the old order.


But what really aroused their anger was the claim of humble and uneducated people to interpret the Word of God. Dr. Baillie was perturbed lest the 'silly, simple lads' in the Scots army should come into contact with opinions which might corrupt them. His anxiety for the welfare of their souls was genuine, but it arose, however innocently, from the conviction that such as he must always know, under God's guidance, what was best for 'silly, simple lads'. They were not to be encouraged to think for themselves.

But dismayingly, they were thinking for themselves. They might be heard - they were indeed heard - haggling over a stall not about the price of the wares, but about the seventh verse of the fifth chapter of he first epistle of St. John. One of the participants in this particular argument, asked if he was an Anabaptist, cried: 'No, but I am a downright separatist, and will by the grace and power of God, seal it with my blood.'

When ordinary men and women got it into their heads that it was a fine thing, but the grace and power of God, to be 'downright separatists,' the secular as well as the spiritual order was threatened.

Sadly there is not enough of this sort of analysis and rather too much detail about armies marching hither and thither and the machinations between different wings of the Royalists. Wedgwood's approach is, of course, not without value. For those hoping to learn a general history of the Civil War there are few books that come close, though the detail can be overwhelming. I also found that Wedgwood's emphasis on events in Scotland and Ireland had been neglected in my own reading of the period and she helped to illuminate this. Particularly important in understanding why the Scots gave up Charles to Parliament (to his immense surprise). Finally, Wedgwood's highlights the role of Prince Rupert, the principle architect of many of Charles' initial victories, and her book is in part an attempt to rescue Rupert's reputation. While I can take or leave princes, Rupert's military skills and role are clearly of enormous importance in understanding the war.

For all these criticisms, Wedgwood's book has much of interest to the casual and serious student of the English Civil War, but the reader would be advised to read further to fully understand why this was a period when the world was turning upsidedown.

Wedgwood - The Trial of Charles I
Hill - God's Englishman
Purkiss - The English Civil War: A People's History
Posted by Resolute Reader at 9:31 pm