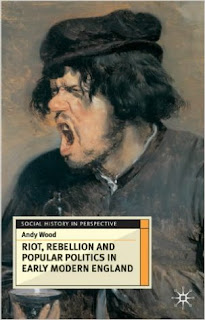 In my reviews of books on early modern rebellion's such as the Pilgrimage of Grace and the Western Rising, I've noted that the question of why people rise is often a complicated one. All too often uprisings are described as "religious" or "economic" as though there is a simple explanation for these chaotic events. Andy Wood's book arrives then, as a breath of fresh air. In it he attempts to understand the surprisingly complex question of "what is politics?" and finds that while "early modern labouring people constituted their political identities within strong senses of locality" they were also shaped by, responding too, and helping to shape wider, national politics too.

Unusually, Wood tries to define politics, coming up with the following definition


politics will be understood to occur where power is reasserted, extended or challenged. Politics is therefore the product of deliberate, human agency and is pre-eminently about conflict and change. In this analysis, politics does not occur where the distribution of power remains static and unchallenged.

In other words, the author see politics as a dynamic engagement between people and wider society. Thus changes to material conditions - access to food, or infringements on historic rights - become the subject of wider "politics" for the community.

Wood argues that the early modern state was actually quite limited in its "coercive powers", relying instead on a "broad acceptance" of "widely shared notions of law, custom and patriarchal order" to maintain control. He points out that "the early modern English state operated in a highly legalistic form... early modern rulers could not simply string lower-class dissidents up from the nearest tree". Though Wood also recognises that there are exceptions to this, but these often prove the rule, such as the massacres in the wake of the Western Uprising of 1549 committed under martial law by a local commander. Drawing on the work of Gramsci, and his ideas of cultural hegemony, Wood says that


presumes not only that social power operates to its greatest effect the through the domination of culture, but also that it thereby produces the terms of its own subversion. We also look at how, in order to press claims upon their rulers, subordinates exploited the very concepts that had been designed to win their loyalties: the same notions of law, custom and household order that integrated the early modern polity were also deployed by plebeians in popular politics

Thus we see rebellious groups and individuals using the language of the ruling class to justify their actions, appealing to the king over the heads of his lords and advisers, or expecting justice from gentlemen if they present their case fairly. Wood draws on Edward Thompson's work, noting how he argued


There is a sense in which rulers and crowd needed each other, watched each other, performed theatre and counter theatre to each other's auditorium, moderated each other's political behaviour. This is a more active and reciprocal relationship than the one normally brought to mind under the formula 'paternalism and deference'.

This perhaps helps explain why rarely in the early modern rebellions (the noted exception is the Peasants' Rebellion of 1381) do the rebels clamour for radical change. While revolution is in the air simply because large numbers of people are in arms, their is rarely an enormous desire for change. Actually what is taking place (classically during the Pilgrimage of Grace) is an mass struggle for the maintenance of the status quo. Indeed this helps to explain why those taking part in rebellions often came from all strata of rural life. Gentlemen pressed into joining rebellion, who then (at least for a time) appear to commit themselves whole heartedly to the cause. Wood notes for instance, that in times of food shortages in England, food riots were common. But the participants rarely rioted for the distribution of free food. Instead they forced vendors to sell at a fair price.

This is particularly true of rural events during the English Civil War. Wood examines in detail the "clubmen" of the First Civil War those rural movements which often originated in attempts to protect food and land from marauding Royalist and Parliamentary Armies. While these seem superficially radical they "conservative: suspicious of innovation, hostile to outsiders, defensive of the established place off the united village community within the larger polity". Wood contrasts these to the radical Levellers and Diggers, who had more radical visions of an alternative society, but he points out that they also often focused on the village and small town as the way to organise society, imagining a sort of Utopian agricultural community, albeit one without landlords and rulers.

Wood notes how, particularly in terms of Digger statements, their language was often rooted in historic ideas and demands that would not have been out of place in 1549 or 1536, but go much further. This has less to do with demands to kill the gentlemen or the rich (a common enough cry for many centuries) but more to do with a vision of collective transformation of society. As one group of Diggers declared


Therefore you of the poorer sort, understand this, that nothing but the manuring of the common Land, will reduce you into a comfortable condition.

Through the book Alan Wood places great emphasis on the language of ordinary people and their rebellions. While this isn't really a history of those rebellions, there are many details here that will point the reader to further information and sources. He concludes,


Over the course of the early modern period, we have charted an uneven, contested, messy process by which the legitimising language of community and the institutional apparatus of parochial organisation passed into the hands of parish elites... But we have also seen how local resistance to the exercise of social power helped to form collective plebeian identities within individual villages, 'countries' and regions.

This brings to mind Marx and Engels' famous quote about the history of early class societies being that of class struggle. Alan Wood has placed such struggles, both open and hidden, at the heart of his attempt to understand the dynamics of the early  modern period. While his book might not be accessible to those who haven't got at least some knowledge of the period, it is a fine introduction to an formative period of English history that deserves a wider readership.

"This perhaps helps explain why rarely in the early modern rebellions (the noted exception is the Peasants' Rebellion of 1381) do the rebels clamour for radical change. While revolution is in the air simply because large numbers of people are in arms, their is rarely an enormous desire for change. Actually what is taking place (classically during the Pilgrimage of Grace) is an mass struggle for the maintenance of the status quo. Indeed this helps to explain why those taking part in rebellions often came from all strata of rural life. Gentlemen pressed into joining rebellion, who then (at least for a time) appear to commit themselves whole heartedly to the cause. Wood notes for instance, that in times of food shortages in England, food riots were common. But the participants rarely rioted for the distribution of free food. Instead they forced vendors to sell at a fair price."

That sort of seems like a distinction without difference. There is no clear separation between the radical and non-radical. Most revolutions don't begin with clearly radical intentions. About any riot, rebellion, or revolt becomes a revolution if it becomes large enough and lasts long enough.

Gentlemen and other figures of authority were also pressed into joining various revolutions, including the American and French revolutions. Plus, revolutions have almost always involved the re-envisioning of a past to be defended, which was particularly true of the American Revolution. Jefferson went so far as to invoke the Norman invasion from 7 centuries before. Many revolutionaries saw their demands and claims as rooted in the ancient past or even in divine origins as with natural law.

Anyway, most public protests, whether the leads to revolution or not, are not abut getting free food or other free stuff. Most people simply want a system that seems fair and just or somehow worthy and to their benefit.

Here is the distinction I see as having a difference.

What changed these past centuries was the ability to organize large numbers of people without government. This was made possible with the invention of the movable type printing press and the increase of literacy. The ability for the average person to communicate easily and cheaply to large audiences entirely shifted power.

Without large-scale organization that bypasses government, revolutions aren't possible. For this simple reason, earlier uprisings had no chance of becoming revolutionary.

Also, printing presses and literacy allowed dialogue to happen. Revolutions don't happen out of the blue. It requires decades or even generations of ideas spreading and developing before revolution can be sparked in the public mind.

I thought of another possibility.

Literacy isn't just about a mode of communication. It also is a particular way of thinking, of perceiving the world and relating to others.

One thing that has increased along with literacy is abstract thinking skills. What this allows is the ability to think in terms of abstract ideas and hence universal ideals. The ability to think abstractly is central to envisioning new possibilities outside of the context of known concrete experience.

This would relate to why these early uprisings tended to be local (with a particular kind of past-orientation). They were grounded in a mostly oral and hence mostly local experience.

Literacy creates the conditions for people to not only communicate with those beyond their local community but to also identify with those others. The very notion of a large-scale collective identity (a national public, a common people, a proletariat, etc) is the abstract ground upon which any revolutionary movement must be built.

We often don't fully appreciate how long it took for this new kind of thinking to take hold.