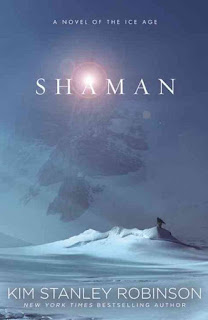 I read this new novel simultaneously with a book by Francis Pryor on the archaeological excavations of a bronze age site in England called Flag Fen. I was struck by a passage in that book where Pryor cautions on the dangers of projecting our own experience of society onto peoples in the distance past who would have had an extremely different understanding of the world, history and religion. Pryor wrote


we must beware of assuming that they must always have acted like us, only more ancient. 2,500 years is a very long time indeed, and I suspect we would find life in the Iron Age far stranger than just living in a round-house and eating off coarse pottery. I am convinced we would find that their whole system of beliefs, standards and values was based on a view of history that was entirely alien to us.

There is a danger then, for novelists writing about the distance past, or societies that are very different to modern capitalism that they simply recreate a version of the 21st century in the past. I am extremely happy to say that I think that Kim Stanley Robinson doesn't fall into this trap with his wonderful novel Shaman which explores the world of hunter-gatherers 25,000 years ago.

Robinson doesn't just evoke a world that seems real, he tries to portray it through the eyes of a hunter-gatherer, Loon, who is being trained as a Shaman. Loon understands the world from the magic he knows about, the stories he has been told and the way that he and his tribe are part of nature. Robinson has clearly studied hunter-gatherers extensively. So he describes how the tribes have deep and constantly developing knowledge of flora and fauna. How they live is far from ignorant, violent or savage and much their collective survival is the act of the collective. That's not to say that individual "leaders" don't exist, but in Robinson's imagining (and backed up by various real world studies) these leaders are part of a wider collective. No one in Loon's group (just as among real world hunter-gatherers) would blindly follow dangerous suggestions from their head-man. I say head-man here, even though the tribe described often consider the women to be the most important part of the group.

At the heart of this novel is a short story where Loon and others have to rescue Loon's wife from another tribe who uses them as slaves. I actually found this the least interesting and entertaining part of the book. It felt contrived and bolted on. Far from the really fascinating story of how hunter-gatherers survived, understood their world and changed it. Those who have seen the wonderful film Cave of Forgotten Dreams will recognise that some of Shaman is set within and around its location. Robinson beautifully characterises the way the paintings on the wall of that cave come to life, and seem to be real to the artist, at the same time as being part of another spirit world.

This is a great evocation of the past. Whether it is completely accurate we'll never know. But because it is based on real anthropology it is as far from the Flintstones as a fictional depiction of the past can be. It also helps that Kim Stanley Robinson is a cracking writer. Read it.