Richard Holmes - Falling Upwards: How we took to the Air 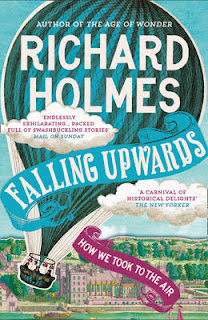 Richard Holmes' eclectic and slightly random history of the early days of ballooning is one of those books that is read for enjoyment rather than a detailed history of the subject. The early balloons were very limited technically and travelling in one was often a life or death matter. In fact, as a result, ballooning was a popular spectator sport and daredevil performers (frequently women in titillating outfits) often hung from the baskets, spent whole days and nights in them, or performed tricks. The Edwardian "balloon girl" Dolly Shepherd, used to hang on a trapeze at several thousands of feet in altitude before dropping under a parachute. She had many male admirers, though working class women seemed to love her as a "portent of women's rights".

A few individuals saw the potential for scientific investigations from the new flying machines, though unsurprisingly the first real application of the balloon, other than entertainment was military. Two fascinating chapters here deal with the role of the balloon in the American Civil War and during the Prussian siege of Paris (the one that preceded the Paris Commune for my socialist readers). In the former the balloon tended to be used as an observation device, and in the case of the South, a propaganda device. During the 1870 Paris Siege however the balloons took on an enormous propaganda role as they were used to take millions of letters and messages (and the occasional politician) from the besieged city.

France seems to have had a long relationship with the balloon. Poets, scientists and writers (and often combinations of all three) rode them, and fell in love with them. One, Camille Flammarion saw the future in the balloon,

Whither sales this ship? It sails with daylight, clothed,
Towards the Future, pristine and divine; towards the Good,
Towards the shining light of Science seen afar

Writing before the Franco-Prussian war and the military role of balloons, perhaps Flammarion could be forgiven for his belief that the balloon would help bring the shining future closer. Certainly his own travels made him think that the balloon took him to a different place,


This absolute silence is truly impressive; it is the prelude tot that which reigns in the interplanetary space in the midst of which other worlds revolve. The sky here has a tint which we never saw before... Planetary space is absolutely black.

The book ends with the age of exploration, and the Swedish explorer S A Andree, whose doomed trip to try to visit the North Pole relied on scientific and technological innovation over common sense. The three travelers who perished may have inspired and excited the newspaper reading public, but the detailed account in Falling Upwards left me thinking they were publicity obsessed idiots whose faith in engineering was misplaced because it ignored the realities of the natural world.

Holmes' earlier book, The Age of Wonder was a masterful history of the era when science and literature were holding out for a new world, where technology might free human kind. It explored the scientists and their circles striving to understand the cosmos. Falling Upwards covers a similar subject and period, but sadly I found it didn't really hold together as a book and came across as a series of anecdotes not worthy of the book's subtitle, however fascinating they might be.

Holmes - Age of Wonder
Verne - Five Weeks in a Balloon
Posted by Resolute Reader at 2:11 pm