Christopher Hill - The Century of Revolution 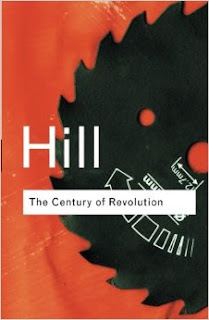 Christopher Hill's history of the English Revolution and its aftermath The Century of Revolution was first published in 1961. Reading it over 50 years later I was repeatedly impressed by how modern and relevant it felt. Extremely readable, accessible and surly a definitive history it ought to be read by everyone trying to understand the origins of capitalism and the revolutionary break with the past that English society took in the 17th century.

This debate remains important. Hill was arguing that the English Civil War was only the military expression of the revolutionary changes sweeping England. That there was even a revolutionary transformation is now controversial. Since the 1960s and 1970s, when the generally accepted view was that a revolution had taken place in England in the 17th century, there have been attempts by a variety of right-wing academics and historians to role this back. Much of their ammunition has been used on the works of Hill and those influenced by him, in order to demonstrate the continuity of the past, and thus the present.

Hill's book is somewhat unorthodox. He dispenses with the narrative approach, breaking up the 17th century into periods, the run up to the Civil War, the period of rebellion and the Interregnum, followed by the restoration and the aftermath of the "Glorious" revolution. Each section of this is further broken down - beginning with a narrative, then looking at politics, industry, economics and so on. Its a useful method and helps to show Hill's main thesis. That there was an English Revolution and it did usher in a world were capitalism could reign.

Hill begins by noting that the Stuart monarchy actually restricted the growth of industry,


In so far as Stuart government had anything which could be described as an economic policy, it was to support the monopoly London export companies against interlopers, to slow down industrial development and control it through gilds and monopolies, to suppress middlemen.

Nonetheless, industry and trade grew. So by the beginnings of the Civil War period (indeed much earlier in London) merchants were frequently richer than the gentry. But this trade was of interest to the crown only in that it raised revenue. They had no interest in expanding trade. Thus a new class was growing, frustrated and angry at a monarchy that failed to support and encourage them. As Hill explains


So there were many economic reasons for opposing the government. Industrialists, merchants and corn-growers wanted freer trade, less government regulation, no monopolies; gentlemen wanted to escape from the burdens of wardship, feudal tenures, and forest laws; and to be given a freer hand to enclose and bring fresh land under cultivation.

Hill quotes a Professor Stone, who notes the way that this was changing society


Economic developments were dissolving old bonds of service and obligation and creating new relationships founded on the operations of the market... The domestic and foreign policies of the Stuarts were failing to respond to these changing circumstances.

The defeat of Charles I and the new government under Cromwell began transforming this situation completely. Industry and trade were encouraged. This is not surprising, Parliament's support was highest in areas were industry and agriculture dominated local economics, indeed one of Hill's maps makes this very clear. The social changes were significant. The first business of the new parliament in 1660 was to convert Royalist lands to freehold, encouraging the purchase and sale of this land. The importance of this was


Unconditional ownership and transmission of landed property was one essential for planned long-term capital investment in agricultural improvements. The other was that copyholders... should not win absolute rights in their holdings, particularly not an absolute right of inheritance, but could be evicted by landlords who wished to enclose or consolidate.

While Hill notes that there wasn't a social revolution in the English countryside comparable to what took place during the French Revolution, the countryside began to be altered fundamentally in order to allow a new way of organising agriculture that would conclude with the transformation of the peasantry into wage-labourers, either in the rural or urban areas. This process may have been a long, drawn out one, but as Hill says it was now "inevitable".

Hill explains all the other ways in which industry, commerce and trade were encouraged and expanded during the Interregnum. Nonetheless Hill characterises the revolution as "very incomplete". Enormous changes took place, economically, politically, religiously. But


The country had managed to get on without King, Lords, and Bishops; but it could never henceforth be ruled without the willing co-operation of those whom the House of Commons represented.... Nevertheless, an incomplete revolution. In 1644 George Wither had recommended wholesale confiscation of the lands of royalists, with the deliberate object of 'making them peasants'. But nothing of the sort occurred.... A society of the career open to the talents was not established. There was no lasting extension of redistribution of the franchise, no substantial legal reform. The transfers of property did not benefit the smaller men, and movements to defend their economic position all came to nothing. Tithes and a state Church survived; religious toleration ended (temporarily) in 1660. Dissenters were driven out of political life for a century and a half.

Those who argued for a new, democratic, world were defeated as Cromwell changed tack and consolidated the revolution in the interests of the new bourgeoisie. And despite the restoration of the monarchy there was no going back. New methods of taxation were kept by the new monarch and many laws of the Interregnum which were abolished were remade by the end of the century.

This wasn't just in the realm of economics. The 1689 Toleration Act, Hill writes, "finally killed the old conception of a single state Church... The attempt to punish 'sin' by judicial process was virtually abandoned. The laity had won its centuries long struggle against the Church courts." As Hill concludes, "in this respect too the Middle Ages were over".

Despite its relatively short length this work manages to convey the sweeping transformation of English society. The revolutionary years transformed the social, political and economic landscape, on the back of changes that had been developing for decades. But it took the revolutionary act of war, then the abolition of the monarchy to make these changes concrete. Once the changes had occurred the new class that held power could welcome back the monarch, but on a very different set of agreements to previously. The world was now open for fully fledged capitalism to develop and there was nothing that King or Queen could do to stop it.