Emma Hughes & James Marriott - All that Glitters: Sport, BP and Repression in Azerbaijan 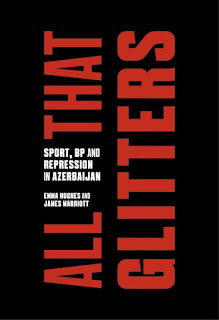 Published just after the European Games took place in Baku in 2015, this little book is a enormous indictment of the Azerbaijan regime, BP and those international politicians that support the government there. The games, along with other recent events, such as the Eurovision Song Contest have little to do with culture or sport, but everything to do with sanitizing the regime to "tell the right story about Azerbaijan and its ruling family".

The President of Azerbaijan, Ilham Aliyez and his family have grown enormously wealthy off the back of their country's enormous stocks of fossil fuel. The family has been central to the governance of the country going back to the Soviet era, and in the post-USSR world have worked hard to maintain their grip on wealth and power. A key part of this has been building strong links with western governments, in part to promote and encourage political support for Azerbaijan's bid for the European games.


In May 2012 he [Aliyev] met UK Prime Minister David Cameron. In the next six months he made visits to, or invited into the presidential palace, 11 European heads of state. In June... he attended the opening of the London 2012 Olympics. Finally, on 8 December 2012, the president and first lady were in Rome to hear the news that Baku had been chosen... to host the Games.

Aliyev was clear about the importance of the Games, that they were to bolster his country's "international reputation". Azerbaijan's reputation needs some improvement. There are over 100 prisoners of conscience in the country and this book details how those who speak out about human-rights abuses, expose undemocratic practices, or high levels of corruption in the state and the ruling family can find themselves in prison on trumped up charges, or bundled away in a van. Some are found dead. The investigative journalist Khadija Ismayilova had a hidden camera installed in her bedroom. A tape of her having sex was published online in an attempt to smear her reputation after she had repeatedly exposed the corruption of the Aliyez family and the way that the country's elite "had grabbed and squandered the country's money".

Behind all of this lies money, and that money stems from oil. The key to this lies in the hands of BP which has, in the words of the authors "cemented" an alliance between "an autocratic family, the demands of capital, fossil fuel dependency and the strategy of a global military power". The authors also make clear that while BP makes money from this relationship, their link to Azerbaijan is crucial in supporting the company as it goes through an enormously difficult period following the ecological disaster of Deep Water Horizon. Those who lose out are the population of Azerbaijan whose country is sucked dry of its mineral wealth and whose freedom, democracy and economy is sacrificed in the name of a few rich individuals.

Despite hopes that the wealth from oil would "liberalise" the country, the opposite has taken place. As one campaigning journalist told the authors of this book,


Before the oil and gas incomes came to Azerbaijan we had more democracy and freedom. The main income from oil came in 2006 when the Baku-Tibilsi-Ceyhan pipeline started to operate. And from that time the situation started to deteriorate. We have problems with journalists, political prisoners, religious believers being arrested - if you criticise the government you can be easily interrogated and prosecuted under fabricated charges.

There is hope. The authors point out that international events like the Euro-Games have provided a platform for activists to highlight the problems, and pressurize foreign governments and corporations. The close relationship between the country and BP is also under pressure as oil prices drop and the relatively expensive oil from the region becomes less attractive. What the future holds is not yet clear, but the authors of this powerful polemic make it very clear that there are many brave activists in Azerbaijan prepared to fight for a better deal for ordinary people. This book is about giving them support and solidarity in that struggle.

Marriott and Minio-Paluello - The Oil Road
Baku: Congress of the Peoples of the East
Nikiforuk - Tar Sands
Klare - Blood and Oil
Heinberg - Snake Oil
Posted by Resolute Reader at 12:44 pm