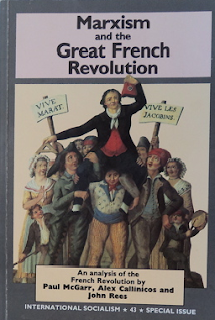 This book is actually a special edition of the International Socialist Journal. Published near the 200th anniversary of the French Revolution, it consists of two excellent essays. The first, by Paul McGarr is an excellent introductory account to the French Revolution. McGarr doesn't dwell in great detail on the details of the Revolution, preferring to paint a general picture that concentrates on the forces clashing within French society. Here, McGarr gives the reader a sense of the changing nature of French society and the tensions developing within it:


The French state under Loius XIV pursued vigorous 'protectionist' economic policies... designed to serve the interests of the state in its conflicts with its rivals. But they were also designed to help French trade, commerce and manufacture - and thus the bourgeoisie. Significant elements of the bourgeoisie used their wealth and influence to obtain lucrative positions within the growing bureaucracy of the absolutist state... In short the absolutist state was an adaption to, and partial incorporation of, the bourgeoisie but within a reshaped and restabilised feudal political structure.

Such tensions could not be contained indefinitely, and the author explains well how the economic changes influenced political interests, which eventually exploded into rebellion. But for the Revolution to be carried through required the direct involvement of the masses. McGarr explores the way that this took place through the networks of radical clubs and organisations which discussed, debated and took action. These clubs were numerous and frequently large. The Jacobin clubs in Marseille, for instance, in 1791, involved 2,000 people. McGarr writes


Some estimates put the numbers as high as one million at various points in the revolution... This mass political organisation and its press were the backbone of the revolution. We know more about events in Prais and in the Convention, but too often the fact that behind this stood real organisation right across the country, on a historically unprecedented scale, is forgotten.

What did this mean in practice? McGarr argues that the bourgeoisie needed to break the old order in order to push forward their class interests. But were not able to do this on their own. So they also needed the "class demands" of the peasants and urban masses to drive the revolution on.


The peasants and urban poor were not capable of forming an independent force capable of taking power in society. Only the bourgeoisie had the potential to be a new ruling class. This gave them hegemony in constructing the new order.

Their victory meant that the bourgeoisie now formed the dominant, exploiting class. McGarr argues this because he wants to demonstrate that those who argue that the political and class struggles of the French Revolution were immaterial to the changes in French society are wrong. Students of the French Revolution will find that McGarr's article is a useful short introduction to the debates within the left (and with the right) about the nature of this change.

It is in this context too, that Alex Callinicos' essay is extremely important. Luckily it is available online, though sadly Paul McGarr's is not. Callinicos' has written extensively on the subject of the transition from feudalism to capitalism. This essay, Bourgeois Revolutions and Historical Materialism is an excellent introduction to this topic, particularly in the context of the French Revolution. Though having said that, Callinicos briefly examines other changes such as Revolution's "from above" like that in Germany, the United States and Japan.

One key argument for Callinicos is over which class "led" the revolution. Here he challenges those who simply argue that bourgeois revolutions must be led by the whole bourgeois class. Clearly in the case of many revolutions this isn't the case, the gentry fought on both sides, or changed sides.

It seems to me that this is the only sensible analysis. The origins of the need for revolutionary change arise behind the scenes so to speak. They are the consequences of actions by people who change their way of making wealth gradually over time, and bring within them other interests and needs. This isn't necessarily a conscious activity and does not automatically lead to conscious needs for change. Nonetheless, eventually, critical mass is arrived at and different forces in society a forced to clash. I think the English Revolution demonstrates this very clearly, as parliament gradually is forced to confront the king over more and more key economic and political questions until eventually he has to be fought. Few, if any, who took up arms in 1642 for Parliament did so imagining they would be bringing down the monarchy.


Capitalism, involving...  the spread of commodity circulation, necessarily develops in a piecemeal and decentralised way within the framework of feudal political domination. It gradually subverts the old order through the infiltration of the whole network of social relationships and the accumulation of economic and political power by capitalists. The effect is both to the many capitalists to the ancien régime but also to change the nature of that régime, so that old forms conceal new, bourgeois relationships.

Or as Engels wrote (quoted by Callinicos) ‘The political order remained feudal, while society became more and more bourgeois.’

Again, as in McGarr's article, Callinicos tackles those, such as the political theorist Theda Skocpol, who argue that what took place in the English Revolution was a "political but not a social revolution". To demonstrate this, Callinicos examines the changes that take place in the role of the state. Again, these arguments should be read by anyone seeking to understand the political and social transformations taking place in England and France during the Revolutions. Key to these changes though, are the various political actors. In the French Revolution we have the peasants and urban masses, with the Jacobin revolutionaries (like Cromwell) forced to play a balancing act between the groups' differing interests. This is why the historical analysis of McGarr's piece is so important, because the revolutionary process taking place as social forces grow and develop during the Revolution are key to understanding why different groups acted in particular ways at different times. Revolutionary change was not inevitable, and as Callinicos points out, the Bourgeois revolution failed in its classic sense in countries like Germany, having to be imposed from above. Revolutions


in which the existing state apparatus was used violently to remove the obstacles to the construction of unified capitalist economies. It is essential, therefore, to consider some of the main features of these revolutions.

Finally, Callinicos notes that the contemporary changes have taken alternate forms. The Russian Revolution needed workers to lead the peasantry to victory in 1917. But in countries were this wasn't possible, various alternative revolutionary leaderships were able to play this role "often marching under ‘Marxist-Leninist’ colours but dominated by the urban petty bourgeoisie, were able to lead and organise successful peasant wars against imperialism and its allies."


The historical irony that movements claiming the inspiration of Marxism should do the work of capitalism, merely underlines the fundamental difference between bourgeois and socialist revolutions. Bourgeois revolutions are characterised by a disjunction of agency and outcome. A. variety of different social and political forces – Independent gentry, Jacobin lawyers, Junker and samurai bureaucrats, even ‘Marxist-Leninists’ – can carry through political transformations which radically improve the prospects for capitalist development.

This however is not enough. The revolutionary defeat of feudalism and the introduction of capitalism, was a historic progress step. But today Capitalism is a fetter on the further development of human society. Understanding the forces that led to that change, helps us better understand the nature of the beast we must destroy today. These two essays should be read by anyone seeking to turn the world upsidedown.